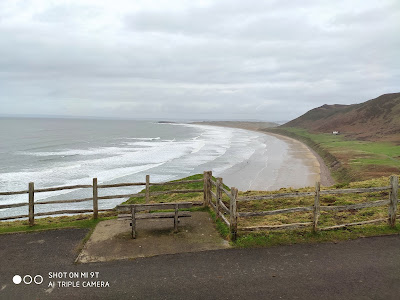 As those who have been paying attention will know, Mrs PBT’s and I spent a few days recently, in Welsh Wales. We travelled down to for a family funeral, to pay our final respects to my great aunt, who passed away last month at the ripe old age of 97.

Whilst funerals are obviously sad occasions, they do afford the opportunity of catching up with family members who you might not have seen for a while. My aunt’s was no exception, but along with reconnecting with the Welsh side of the family, being in Wales allowed me to re-explore an area which was a favourite from childhood, and the setting for some memorable family holidays. 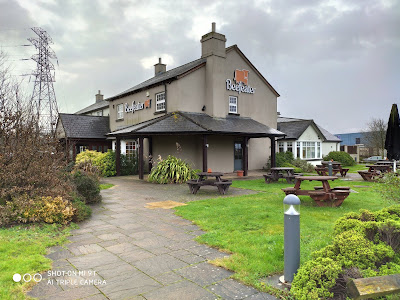 We travelled across to Wales on the Sunday, staying at a Premier Inn, on the edge of Llanelli; the Carmarthenshire town famous for both rugby and tin-plate production. Just across from Llanelli, projecting out into the Bristol Channel, on the other side of the Loughor estuary, is the Gower Peninsular; the first area in the United Kingdom to be designated an Area of Outstanding Natural Beauty.

With my aunt’s funeral not due to take place until 4pm on the Monday, and us not travelling back to Kent until the following day, we had a free morning to carry out some of that exploring. So what better than to head over to the Gower for a scenic drive around and a stop off at one or two local beauty spots. 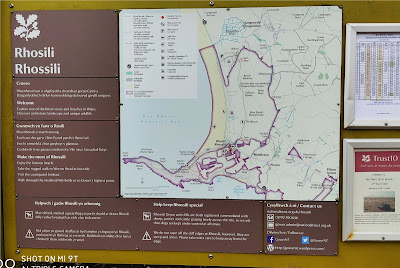 The Gower was the location of several happy family holidays as a child, staying with my parents and younger sister in a caravan at Oxwich Bay. My aunt and uncle lived in nearby Swansea, and most days we would meet up with them and my four cousins, sharing idyllic days on the nearby beach, or visiting some of Gower’s other coastal  attractions.

The sheer beauty of some of those long sandy beaches, sandwiched between exposed rocky headlands, stayed with me, and I managed to share a small part of it with Mrs PBT’s, when we spent the second half of our honeymoon at Caswell Bay. I had a longing to re-engage with this part of the country and show Eileen a bit more of what Gower had to offer, so despite it being early February, we set off to visit two unspoilt and rugged locations at the far end of the peninsular. 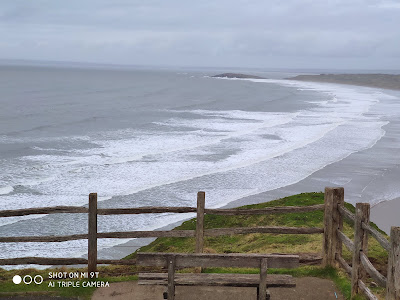 I had an OS map in the car, but to save us keep stopping to look at the map, I suggested we make use of the dodgy Chinese sat-nav, on Mrs PBT’s phone. That was a big mistake as we were directed along roads only narrow enough for one vehicle, and hills so steep that a rack and pinion type of traction, would not have been out of place. In the end, common sense took over and I reverted to my trusty Ordnance Survey Map. 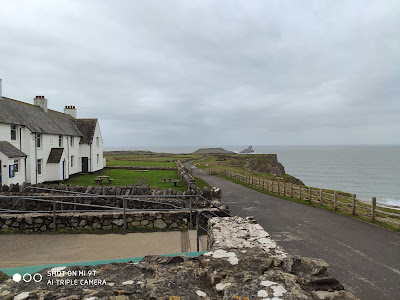 First port of call, was the long sandy beach which forms Rhossili Bay, at the western extremity of the Gower Peninsular. Three miles in length, and backed by extensive sand dunes, the beach is known locally as Llangennith Sands. Behind the beach just north of Llangennith village is Rhossili Down with the highest point on the Gower Peninsula, the Beacon reaching 633 feet above sea level.

We always referred to the beach as Llangennith, and with the dunes providing shelter from the strong onshore westerly wind, this was the perfect place for our two families to set up camp and spread ourselves out, before making forays down to the water’s edge. Wading out through the shallow surf until almost at chest height, and then jumping, and at times cresting the powerful breakers which came crashing in from the Atlantic, was a favourite pastime of my father, sister and one of our cousins, until the time my sister was caught in a rip-tide. 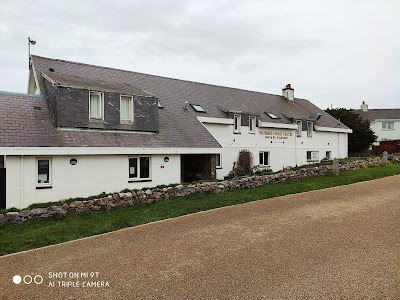 I was present too, but as I could feel an undercurrent starting to pull at me, I sensibly turned and swam back towards the shore. The next thing I saw was my father frantically waving for me to help with my sister. Instinct kicked in, so I swam back out, and together the pair of us, managed to haul my sister back to safety. It was a close-run thing and a strong reminder of  the power of the sea!

I digress, but when re-visiting places such as this, the memories come flooding back. On this current visit, we didn’t drive all the way down to the dunes, but instead parked up on the hill, taking in the splendid view out to sea and the magnificent sweep of Rhossili Bay. 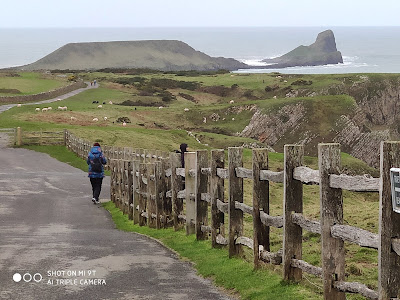 We were both a little peckish by now – all that sea air, so my plan was to head southwards along the bay to the rocky headland which culminates at a promontory known as Worm’s Head. I’d done a spot of homework, and discovered that the nearby Worm’s Head Hotel offered a decent lunch and an equally decent drop of ale. So off we went.

The only trouble is that with the imposing bulk of Rhossili Down in the way, there is no direct road from Llangennith to Rhossili village. We had to head several miles back inland, before joining first the A4118 and then the winding B4247, which took us to our destination. We parked up at the National Trust-owned car park at the far end of Rhossili, which conveniently is adjacent to the Worm’s Head Hotel. 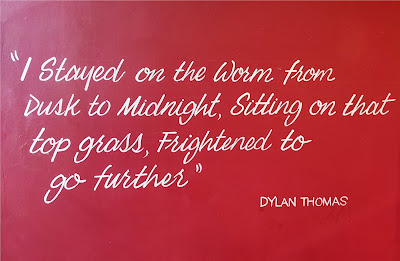 We made our way inside, after stopping to take a few photos of the magnificent scenery. The Worm's Head, is shaped like a giant sea-serpent and marks the most westerly tip of Gower. It’s name comes from the Norse “Wurm,” meaning dragon, and is an island joined to the mainland by a rocky causeway. I remember walking out to the end of  the promontory with my father. I’m sure he was tempted to cross to the island, but my mother would have had kittens at the prospect, so on that occasion, discretion took the place of valour. 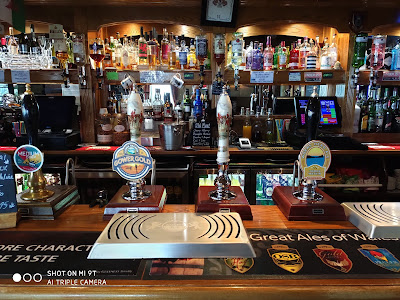 Refreshment time, but when we walked into the bar of the Worm’s Head Hotel, we were the morning’s first customers. The barman informed us that the kitchen opened at midday, so with less than 15 minutes to wait, we ordered ourselves a drink, and moved into the adjacent Bay Lounge, where there are magnificent views out across the sweep of Rhossili Bay. We discovered that where we were sitting was once the hotel car park; this section and the adjoining bar being added to the main hotel, back in 1972. 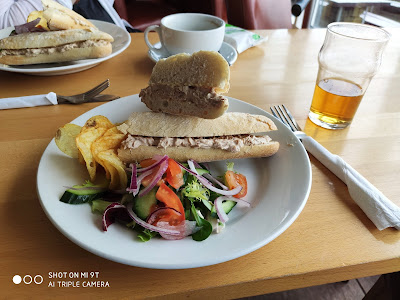 This was probably shortly after my last visit to the area, and as I remarked upon the splendid view, the barman replied how lucky he was to have such scenery right outside his “office window.” There were a couple of cask ales on tap, and in selecting the 4.5% Gower Gold, I made the right choice, as this locally-brewed golden ale, is packed full of cascade hops.  Definitely a 3.5 NBSS. 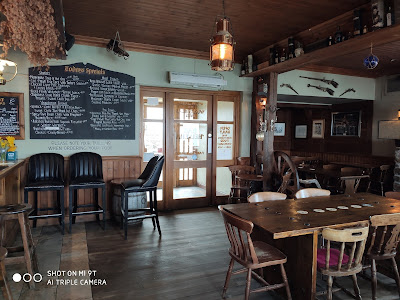 Not quite knowing what would be happening after the funeral, we both opted for a light lunch, in the form of a tuna and mayonnaise baguette apiece. Nice and fresh, it fitted in
with the bright and airy feel of the hotel, which has 17 en-suite bedrooms, a restaurant and all the facilities one would expect from such an establishment.

The Worm’s Head Hotel is family run, and given it remote location, at the western extremity of the Gower Peninsular, is the ideal place for getting away from it all, whilst still retaining plenty of creature comforts. With nothing much in the way of shops in the immediate vicinity, Mrs PBT’s might take some convincing, but I’m already sold on the place.

Lovely pics of the Gower. Glad you got decent weather.

By the by, if you want to get rid of the Leica watermark press phone settings button (top right) and deselect watermark option. Took me ages!

Thanks for the tip, Martin. Matthew sorted the watermark out for me the other day. These tech-savvy youngsters put us oldies to shame!

We certainly were lucky with the weather, and we also learned, from one of my relatives, that the Gower has its own micro-climate. How else do you explain daffodils in full bloom, growing by the side of the road, at the beginning of February.

Bluebells out up here in Cheshire. Who stole the winter?

The daffs are out here in Cardiff too Paul!