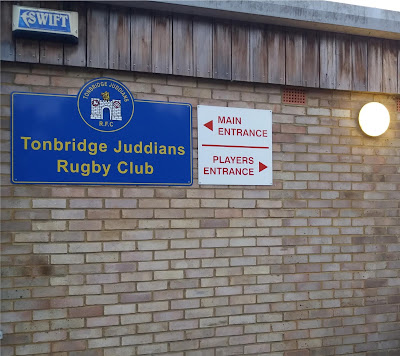 As alluded to in the previous post, the lad and I called in at Tonbridge Juddians Rugby Club on Friday night, to see what was on offer at their Winter Beer Festival. Unlike the main summer event, which is run jointly with SIBA and held under canvas, the winter festival takes place at the clubhouse, and is a much more of a low-key event.

The festival is normally timed to coincide with the Six Nations rugby tournament, and with England playing Scotland this weekend, the clubhouse was likely to have been full to bursting point on the Saturday. So much as I enjoy the game that’s played with an odd-shaped ball, I don’t enjoy being squeezed in so tight that I can hardly move. Therefore, as in previous years, Friday evening is the right time to partake of a few interesting beers. 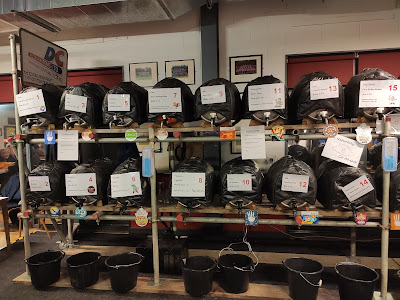 It also provides a good excuse to catch up with friends and acquaintances you might not have seen for some time. Matthew and I arrived just after 8pm. We’d each brought a TJ’s Festival glass with us, as we’ve several at home from previous events. After purchasing a tenner’s worth of tokens each we headed straight to the bar. There were 24 beers on sale, somewhat disappointingly none of them were head-bangers this year, but all priced at one token per half pint.

We spotted a small group of friends from West Kent CAMRA, who’d managed to grab a table. There were a couple of seats spare, so we sat down to join them. Some had been there since shortly after the 5pm opening, so it was handy to compare notes with them. The majority of the beers were locally sourced, although there were a few from places further afield such as Brighton (Hand Brewery), Bristol (Arbor) and Newport (Tiny Rebel). 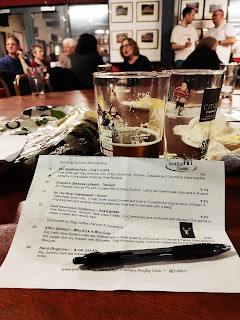 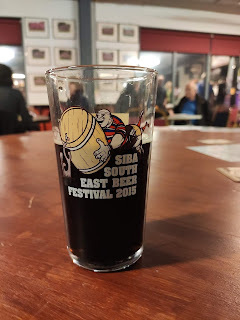 Stand-out beers for me were QPA, a very drinkable 4% pale ale from Quantock Brewery (not exactly just down the road), Five C’s APA a 5% American Pale Ale from 360º Brewery of Sheffield Park (much more local) and Goa Express a 5.2% “Chai Baltic Porter” from Dark Revolution of Salisbury (somewhere in-between in terms of local). The latter, with its distinctive Chai spice notes and flavours, was surprisingly drinkable, and whilst not an every day beer, was a good dark beer to finish the evening on, from a festival range that was disappointingly bereft of dark beers. 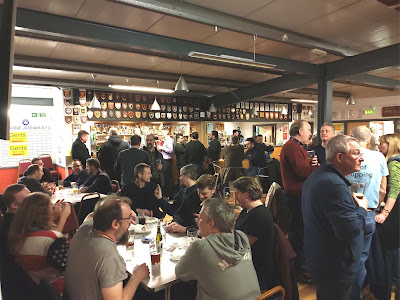 As well as friends from CAMRA, we bumped into two couples, plus assorted hangers-on who we know from the days when our children all attended the same primary school. Tonbridge is that sort of town.

As the evening progressed the number of people in the clubhouse started to dwindle; noticeably in comparison to previous years. Matthew and I left shortly after last orders had been called and made our way home back along Tonbridge High Street. The town too seemed quite subdued, and even our local Spoons looked half empty as we passed by. 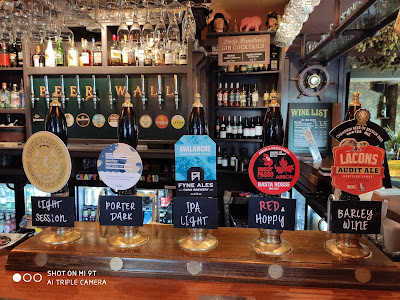 For some years now, I have shied away from beer festivals, although I do like to support a local event wherever possible. Being away the previous week, meant missing Tonbridge’s first Beer Weekend which, from the reports was quite successful. It was a pub-based event, with various outlets in the town putting on something special, such as a meet the brewer evening, or they hosted a “tap-takeover” from a brewery whose beers we don’t often see in the town – the Nelson, for example, featured a range of beers from Fyne Ales in Scotland.

Horses for courses, and whilst I am happy to support both types of event, I really like the concept behind Tonbridge’s Beer Weekend, and will ensure that I am around for next year’s event – assuming there is one!
Posted by Paul Bailey at 15:24

Are you ready to make money automatically?