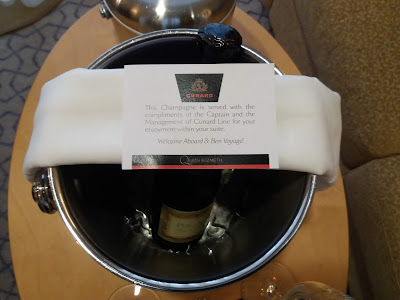 It’s nearly two months since the short “taster cruise” that Mrs PBT’s and I undertook, and looking back I realise I didn’t actually write much about  life on board ship or, indeed, the ship itself. So as the pair of us are looking to undertake a longer voyage in 2020, I thought I’d put together a short piece about our all too short time afloat on the Cunard Queen Elizabeth.

As mentioned in a previous post, we voyaged with Eileen’s sister and her husband, after travelling down to Southampton with them. We stayed overnight at the Premier Inn Southampton West, but have to say it wasn’t the best Premier Inn by a long shot. 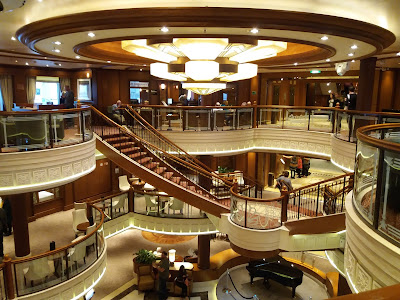 I don’t wish to sound like a disgruntled reviewer, posting on Trip Advisor, but the environmental control in the room didn’t work – we had to contact reception, who provided us with a couple of plug-in electric heaters. This wasn’t a huge deal, in itself, but when I returned from reception Mrs PBT’s informed me there was no plug for the bathroom sink, and the bathroom itself wasn't as clean as it might have been.

I’ll be kind about the place, as the staff did their best, but the hotel had a very tired look about it, and was definitely in need of some tlc. A Hungry Horse outlet, called the Vine Inn was attached to the hotel but, arriving as we did, on 31st October, the restaurant was packed out with hordes of hyped up and over-excited kids, crawling  and jumping all over the bench seating, and generally running amok in their best Halloween costumes. 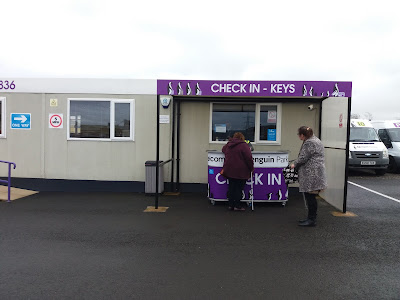 The following morning, my brother-in-law drove us over to a nearby Morrison’s where we obtained a reasonably-priced breakfast, before  heading off to the pre-booked parking-compound, where we would be leaving the car for the duration of the voyage.

The in-laws had chosen Penguin Cruise Parking, who are on the opposite bank of the River Test from the Cruise Terminal. We could see the superstructure of the vessel, that was to be our home for the next two days, towering above the cranes and other port-related structures, which lined the western side of the river. After parking the car and handing over the keys, we were chauffeured over to our departure point, by min-bus. 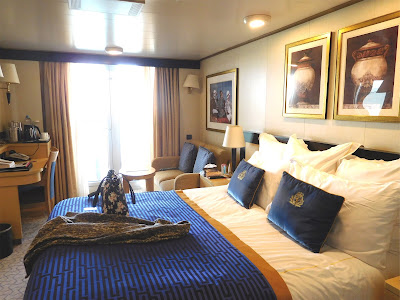 Once deported at the Cruise Terminal, check-in was a far easier, and less rushed process than when flying. Several weeks before departure, we’d been sent pre-printed, bar-coated labels, which we’d attached to the handles of our suitcases. We were able to just hand over our cases at check-in, knowing that the next time we saw them they’d be waiting for us outside our cabin.

We then had the border-control section, which was the only time we were required to show our passports. After this we were each issued with a credit-card sized, pass-cum-identity card. The card acts as you room key, allows you to go ashore – and return to the boat. It also enables you to make purchases onboard ship, as whilst all meals and snacks are free, alcoholic drinks and certain luxury purchases are not. 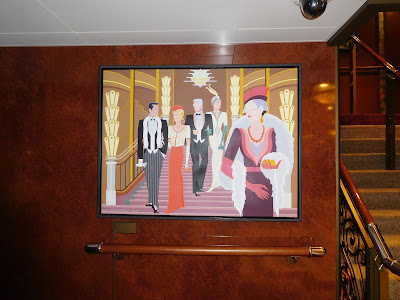 So if you fancy a bottle of wine with your meal, or a couple of beers afterward, you need to flash your card. Another point to note, US Dollars are the de-facto currency on board ship, and everything is priced accordingly. Whilst this might seem strange for a prestige British cruise line, given the trans-Atlantic or Caribbean itinerary of many Cunard cruises, it is perhaps no surprise. The other drawback of pandering to the US market, was that most of the plug sockets in our room were two-pin, American ones. We will take adapters next time! 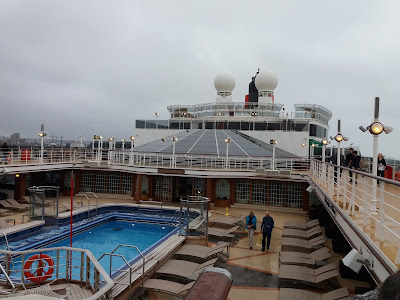 The other benefit to the electronic key cards was there was no need to show a passport when leaving the ship; either in the cruise destination port of Zeebrugge or upon return to the UK., as the card contained all relevant passport details.

Once aboard for the first time, Mrs PBT’s and I were like a couple of excited kids. After we’d located our cabin, and dumped the hand luggage we were carrying, we set off to explore the ship, from, top to bottom and bow to stern. With a 4.30pm departure, we went up on one of the outer deck, to watch as the boat pushed away from the quayside, turned herself around and began slowly sailing down Southampton Water towards the Solent. 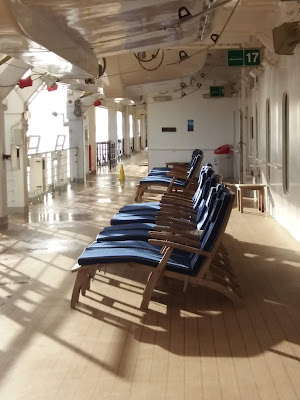 Alongside the in-laws, we attended the compulsory life-boat drill at our designated muster station. After that, it was time to dress for dinner and enjoy some fine dining. We’d been assigned the early sitting in the restaurant, but with hindsight, the second sitting would have been more appropriate.

Apart from splashing out on a bottle of red wine at dinner (they re-corked and saved what was left for the following evening), plus a pint of keg London Pride which my dear wife bought for me, I didn’t drink that much onboard. With tea, coffee and water freely available, there was plenty to keep me hydrated.

And now some general facts and figures about the Queen Elizabeth, for all you ship anoraks out there; surely some must exist? The liner is a Vista class cruise ship operated by the Cunard Line. The vessel was built by the Italian company Fincantieri Marghera, who are Europe’s largest shipbuilders, at their yard in Trieste. 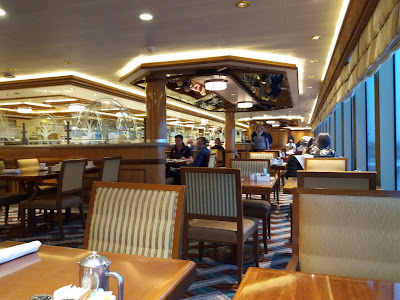 Vista Class ships are designed so that eighty-five percent of the staterooms have ocean views and sixty-seven percent have verandas; the extensive use of glass in the superstructure is also reflected in the class name. At 92,000 GT, the Queen Elizabeth is slightly larger than her sister ship, Queen Victoria, and is able to carry up to 2,092 passengers. 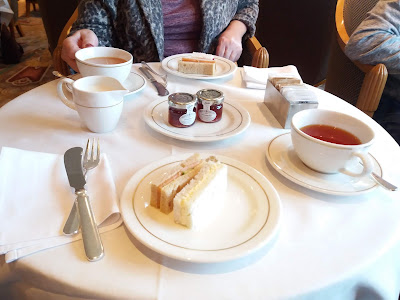 Although having an almost identical interior arrangement to Queen Victoria, the décor, with its many art deco  touches is very different, and evokes the era of the 1930s, in which Cunard's first Queen Elizabeth was launched. The name of the new ship was announced on 10th October 2007, and the ship set sail on her maiden voyage on 11th October 2010.

Right, that’s enough geeky stuff and enough about cruising for the time
being. It was a pleasure to have sailed on the Queen Elizabeth at the beginning of last month, and I look forward to undertaking a longer voyage, possibly as early as next spring.