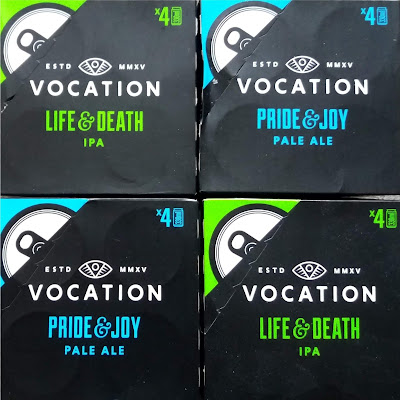 Over the past few months I’ve become a big fan of Vocation Brewing and their range of bold, punchy and hop-led beers. Based in the West Yorkshire town of Hebden Bridge, Vocation brew an impressive range of beers, which includes a number of different pale ales and IPA’s.

With names such as Heart & Soul, Love & Hate, Pride & Joy, plus Life & Death, their 330ml cans have been promoted quite heavily in local supermarkets, including Lidl and more recently at Tesco For the past month or so, 4-can packs of both Pride & Joy, plus Life & Death, normally priced at £6 each, have been available at two packs for £9, an amazing saving of £3 for every two packs purchased.

At this price the 6.5% abv, Life & Death is incredible value, as well as being a very fine beer indeed. This American-style IPA doesn’t take many prisoners, although despite its high alcoholic strength, it slips down rather too easily. Pale in colour, and packed full of juicy malt flavours, off-set by aromas and flavours of tropical fruits, the brewery claim three kilos of hops and forty kilos of malt are used in the brewing of each barrel. 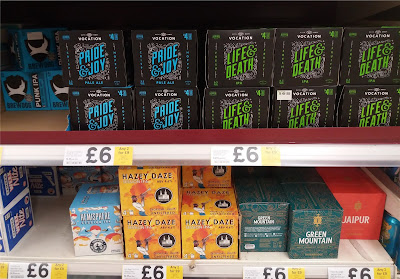 I’ve purchased several packs of this beer over the past few weeks, along with some 4-can packs of Pride & Joy. At 5.3% abv, this pale ale is more of a session beer. Pale golden in colour, crisp and hoppy, with plenty of fruity hop flavours set against a strong malt background, this is another extremely quaffable beer. Both beers are excellent, so much so that it’s difficult deciding which one to go for.

It’s worth bearing in mind that even in cans, these beers are un-pasteurised and unfiltered, so may contain some sediment. I’m not sure if this meets CAMRA’s increasingly hazy definition of “Real Ale”, if you’ll pardon the pun, but when beers are this good, who really cares?

The company has made quite a name for itself, in this part of the country, so much so that there is talk amongst the Beer Socials WhatsApp group I belong to, about making a visit to West Yorkshire, in order to sample Vocation beers on their home turf. 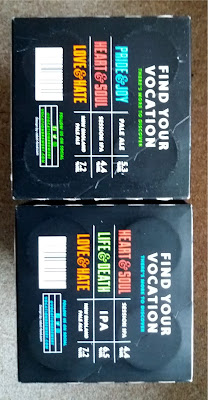 The brewery operate two bars; one in the form of a taproom at their  Hebden Bridge home, the other a bar at Assembly Underground. The latter is a subterranean food and drink venue in the heart of Leeds. Vocation’s outlet has fifty taps, offering the full range of the company’s beers, together with what the brewery claim are the best beers they can source from the UK and abroad.

Whilst the Leeds venue sounds impressive, it also sounds somewhat overwhelming. Personally speaking I would prefer the rather more tranquil surrounding of  Hebden Bridge; a town I visited a couple of times during my time as a student in Manchester.

Since those days, the town has become a centre for artists, writers, photographers, musicians, alternative practitioners, teachers, plus all things Green and New Age. More recently it has attracted wealthier commuters, because of its proximity to Leeds.

Whatever type of resident Hebden Bridge attracts, it sounds the ideal for a spot of ale sampling, combined with a little light hill walking.

Spot on, Paul. I'm not a fan of home drinking but when Mrs RM asks me to get her a can they're who I turn to in Tesco.

I raved about their Heart and Soul in a Leeds bar recently
https://retiredmartin.com/2019/08/25/heart-soul/

though as you predict, their Assembly Underground place is a bit overwhelming, and the cask was second order. Still, an experience.

Thanks for the link, Martin. Assembly Underground looks an interesting place, but whether it will appeal to the “beard “ crowd is another matter. 50 taps seems way too many, even if most of the beers are keg.

The trip to Vocation territory has only recently been mooted, so it will need someone to make the necessary inquiries and sort out the travel arrangements, etc. That person could well be me, and my personal preference would be the Hebden Bridge taproom.

You should try the odd tinnie at home. No comparison of course with a drink in a pub; particularly when the beer and the company is good. I normally crack a can or a bottle open of an evening, whilst sat in front of my computer, typing out this blog.

Apart from weekends, evenings are the only time available for writing, although if I get that new laptop I’ve been promising myself for Christmas, I could start blogging straight from the pub!

Ooh, live blogging from the pub would be good!