Drawn to the "Dark Side" 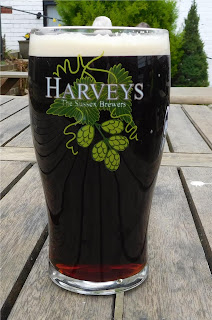 I’ve written before about the difficulty of finding a seasonal dark ale, particularly in an outlet operated along standard pub company lines. There is much more chance of coming across a welcoming, dark winter ale in a pub belonging to one of the smaller independent brewers, but when such outlets are few and far between, you’ve got yourself a problem

Unfortunately one of my all time favourite dark ales, Harvey’s XXXX Old Ale, is normally confined to the brewery’s own tied houses. Very rarely does any “escape” into the free trade. My nearest Harvey’s pubs are at Bells Yew Green, and Hook Green - both a few miles outside Tunbridge Wells, Hadlow (between Tonbridge and Maidstone), or Chipstead, a village to the west of Sevenoaks. None are on my doorstep, although the Brecknock Arms at Bells Yew Green, is just a short train ride away.


Harvey’s XXXX makes it annual appearance in early October. The calendar has just flipped over into December but, as in previous years, I’ve yet to enjoy any of this delectable and very drinkable, traditional winter ale. Imagine my delight then when I discovered that Tonbridge free-house, the Nelson Arms had a cask on tap. 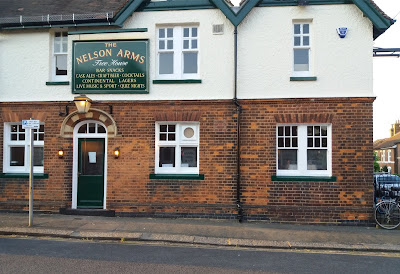 That was Friday evening, so I was fairly confident the beer would still be available on Saturday afternoon. I set off, full of expectation, but upon entering, and surveying the line of pump-clips, my heart sank. “Has the Harvey’s Old finished already?” I enquired, knowing what the answer would be. “I’m afraid so,” came the reply, “We were really busy yesterday, and the cask was soon emptied.”

Fortunately there were several alternative beers on tap by way of commiseration, the Ilkley Brewery Lotus and the Abbeydale Black Mass providing suitable solace. The latter is a strong dark ale, with a 6.6% abv and, whilst not the lush, mellow drink that is Harvey’s Old, still slipped down a treat. Had there been time, I would have given the Velvet Raven Kentish Stout from Tonbridge Brewery, a go as well. (A friend posted on WhatsApp, that the beer was excellent). 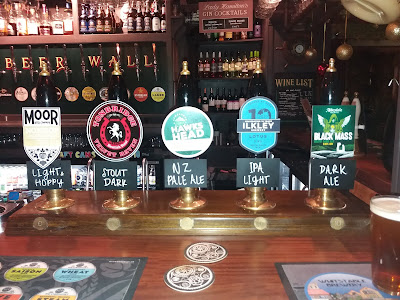 Going back a few weeks I did actually strike it lucky by stumbling upon another favourite dark beer of mine, this time Larkin’s Porter. I am not exaggerating when I say this beer is one of the finest porters around; rich, dark and  packed with the flavours of  roasted coffee and chocolate.

I was with a group of friends and we were on our way back from a CAMRA presentation at the Halfway House in Brenchley. I wrote about the event here, and I also promised I would write about the King William IV pub in Pembury; the place we called in at on the way home. 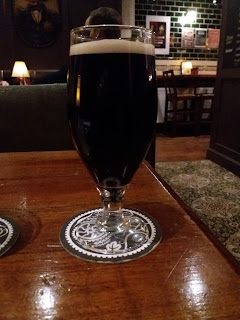 A member of the group, known as “Fast drinking Dave,” lives in Pembury, a large village situated just the north-east of Tunbridge Wells.  For those who care about such things, Pembury is the birthplace of Pogues lead-singer, Shane Mac Gowan – he of the perfect dentition! The King William IV is Dave’s local, and a very fine local it is too.

It wasn’t always so, as its position as a prominent cask ale outlet used to be held by another of Pembury’s three pubs. I first knew the King Will when it was owned by Allied Breweries, and traded as a Friary Meux house. It later passed to Greene King, before becoming a free house in 2018.  It is now under the stewardship of a locally born landlady and a landlord-cum-chef, who hails from Cornwall.  This has led to the King Will stocking a range of beers predominantly from both Kent and Cornwall. A choice of good wholesome pub food, is also available including the chef’s legendary, home-made Cornish pasties. 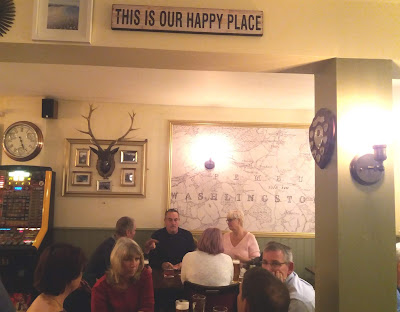 It was early evening when we arrived, and the pub was really packed. It was standing room only, but we managed to find a few stools, and perched ourselves around a large pillar, which had a convenient ledge for us to rest our drinks. With people crowded round the bar, I couldn’t see which beers were on, but by the time I’d grabbed a perch, Dave had come back from the bar with the news that as well as St Austell Proper Job, Larkin’s Porter was on tap.

It was a no-brainer as far as most of us were concerned, so with pints of porter all round, it proved a good 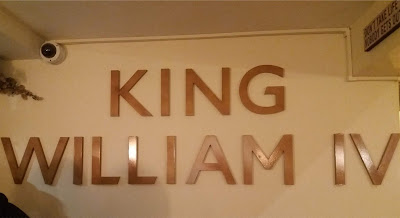 way to end the evening. For most of us, this was the first Larkin’s Porter of the season. The brewery keeps stock back until after Bonfire Night, which is regarded as the official release date. 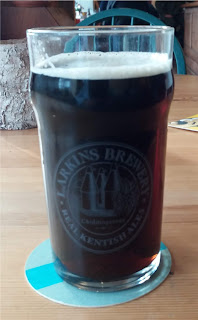 I have occasionally seen it available a week or so earlier, but Larkin’s claim the beer is all the better after undergoing a six week maturation period in cask. It is certainly well-conditioned, and pours with a really thick, creamy head. We all thought it was excellent that night, so much so that most of us went for a further pint.

As I said earlier, the King Will was packed that night, primarily with locals, enjoying a get together for a chat, over a few drinks. Pubs like this are to be cherished and looked after, as they prove that, in the right hands, even the most dull and soulless of pubs can be brought back to life and given a bright future.


I’m still keeping an eye out for dark beers. Fortunately two Tonbridge pubs, the Beer Seller and Fuggles are both running promotions for dark ales during December, so my cravings for something from the dark-side may soon be satisfied.
Posted by Paul Bailey at 22:56

Those dark seasonal beers look so appealing, don't they?

Mrs RM was born at Pembury Hospital, wonder if she and Shane know each other?

Dark beers certainly do look appealing, Martin. I imagine it has something to do with the sharp contrast between the darkness of the main body of the beer and the white of the head.

I don't know about Mrs RM and Shane MacGowan, but our son Matthew was also born at Pembury Hospital. It was the old Victorian former work-house back then, rather than the shiny new, PPI financed building we see today. The only part of the old hospital still standing, is the chapel standing lost and forlorn, over-looking the top car park.