A few odds and ends 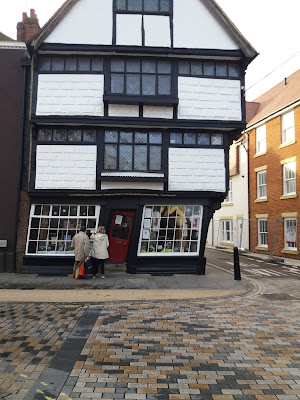 There’s a few odds and ends I missed out from the previous post, but as it was already quite lengthy, here’s what I neglected to say.

To begin with, I didn’t take a wrong turn out of Chartham Hatch,  although I did still manage to miss the Chapter Arms. With my hood up and my head down against the wind, I obviously walked straight passed it, but it made no odds as the pub has been closed since the beginning of the year.

There are mixed reports as to what is going on with the place, and these range from the pub being converted to a private dwelling, to the site being developed to provide holiday accommodation, along with a micro-pub.

I haven’t seen the plans or the pub itself for that matter, so I can’t really comment, but having said that the reviews on Trip Advisor, prior to its closure, were generally favourable. Given its isolated position, food was a prominent feature, so I’m not sure whether a  wet-led micro-pub is going to attract much custom.

The other snippet I can’t resist from including is me taking a crafty leak – ala BRAPA, on Chartham station. Unlike Simon, I got away with it, as I checked for CCTV beforehand. Also, there were no other passengers present when I made my way to the far end of the platform, and took advantage of the luxuriant weed growth, next to the rusting cast-iron fence. When you’ve got to go, you’ve got to go; especially when you’re a gentlemen of a certain age!

Next time, a tale about an unusual Canterbury micro-pub where key-keg outsells cask by four to one.
Posted by Paul Bailey at 22:18

Best use of "luxuriant weed growth" in a blog this week.