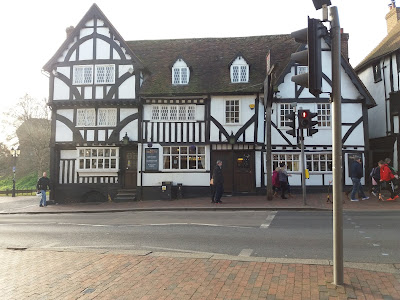 With parts dating back to the 14th Century Ye Olde Chequers Inn is one of the oldest buildings in Tonbridge and almost certainly the town’s oldest pub. It is a handsome, and quite imposing, half-timbered building, decorated in a classic black and white “Tudor Style”, even though it predates that period by a century or two.
It is situated in the shadow of Tonbridge Castle, slightly uphill from the bridge over the River Medway, which is referred to by the town as the “Big Bridge.” With its attractive exterior and an interior which is full of character (particularly if you’re a fan of exposed beams), the Chequers ought to be one of the best pubs in Tonbridge, but unfortunately fails to deliver on several counts. 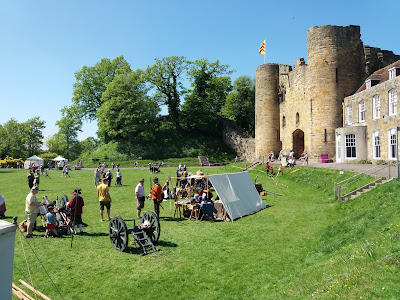 I might be somewhat biased in my opinions of the pub, as the truth is I have never been a fan. When I first came to Tonbridge, initially for work in 1979 and then, five year later to live as well, I regarded the Chequers as a real “old man” pub, and looking back I suppose it was. I was in my mid-twenties back then, and would have considered anyone 40 as old, but the pub did have a real old person feel to it.
I remember one lunchtime, going for a drink in the Chequers with a colleague who was much older than me. Jim was a regular drinker in the Chequers, as he was in many of the town's pubs, and on that occasion we got into conversation with someone he knew who worked as a printer, in Fleet Street. It wasn’t long before this character confided he was supposed to have been at work, but one of his mates had clocked him in. 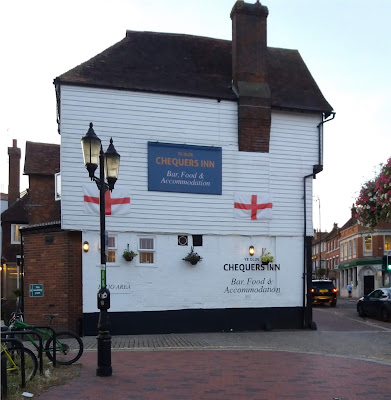 This practice was apparently commonplace, and I want to come back to this later, because back in the early 1980’s Tonbridge was regarded as a “print town.” There were still a couple of large printing firms in the town, along with a major magazine publisher, and a well-paid workforce, meant plenty of customers for local pubs.
The Chequers was no exception and trade flourished at lunchtime, with a selection of hot food always available. It was popular with office workers for the same reason; this being at a time when lunchtime drinking was far more commonplace than it is today.
Courage owned the pub back then, but as I was not a huge fan of Courage beer, I tended to  give the place a miss. The Courage connection came about following a series of takeovers and mergers, as evidenced by some of the many photos taken over the years. I have seen some  showing it as belonging to Maidstone-based Style & Winch, and prior to that it was a Dartford Brewery house. I'm pretty certain the pub had two bars, during my first few years in Tonbridge, but whilst the partitions are long gone, the lengthy, L-shaped bar, does help create a sense of division into different areas. 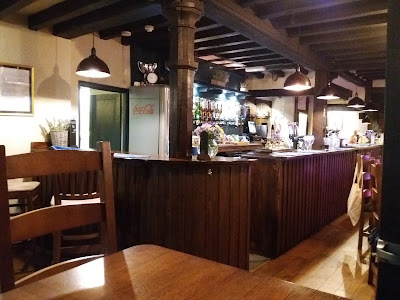 I called in at the Chequers, last Wednesday evening, in order to attend a social gathering of the Tonbridge-Heusenstamm Friendship Circle - the twin town association I wrote about earlier in the year. I was a little late in arriving, and I could see the group sat at a couple of tables at the far end of the bar. I ordered myself a beer and that's when something odd happened.
There were two cask ales on that evening, Harvey's Best and St Austell Tribute. I opted for the Harvey's and was a little bemused when having taken my order, the barmaid marched to the far corner of the bar, at the opposite end of the pub, where there was a another set of hand-pulls.
I could see she was having difficulty pulling my pint, so this did not bode well. She then disappeared for several minutes, leaving me both high and dry and frustrated at the same time. Eventually another member of staff appeared (possibly the landlady), and informed me the barrel was being changed.
I'd realised as much, and was pleased to be getting a nice fresh pint. From my vantage point at the opposite end, I watched as a plastic jug's worth of beer was pulled through, but then watched in horror, as the barmaid reached under the counter and retrieved the three quarters full pint she'd pulled through earlier and topped it up. 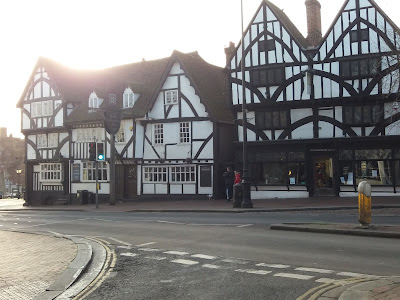 "Pint of Harvey's, that will be £3.90 please."  I was rather shell-shocked so without saying a word I handed over the money, picked up my pint and went and joined the people from the Friendship Circle. The more I thought about it though, the more I realised I'd been short-changed. Instead of a nice cool fresh pint of Harvey's, I'd received three-quarters of a pint of "cask-bottoms,"  topped up with a small amount of fresh beer.
I sat it out; the beer was drinkable, but it certainly wasn't the best pint of Harvey's. I scored it originally at 3.0 NBSS, but knocked it down to 2.5 in view of what I'd just witnessed. I shan't be going back to the Chequers anytime soon. I only stayed for the one, as most of the friendship-circle people had started to drift off by 9.45 pm. Instead, I walked along to Fuggles, where I had  much more acceptable and enjoyable pint of Session IPA from 360 Degrees.
So once again theChequers failed to provide me with an enjoyable drinking experience. I know times are hard in the licensed trade, but serving up a new customer with an obviously sub-standard pint is totally unacceptable. 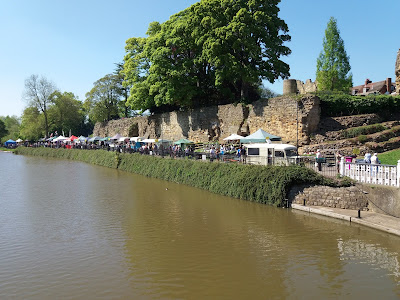 As for the Friendship Circle meeting, well as with the previous get together, at 63 years off age,  I was the youngest person there. My presence mean the attendance just scraped into double figures; a similar situation to my local CAMRA branch socials. I expressed an interest in going across to Heusentamm to help assist the group with their stall at the town's Christmas Market, and this tentative offer, was eagerly seized upon by the organisation's chairman.
That was the sum total of the meeting, but before finishing I want to get back to the story of the printers.  As mentioned earlier, the print trade was once an important feature of Tonbridge's commercial life. Printing though was very much a “closed shop,” and in order to obtain a job “on the print” you had either to be related to someone already in the trade, or had to come with a personal recommendation. 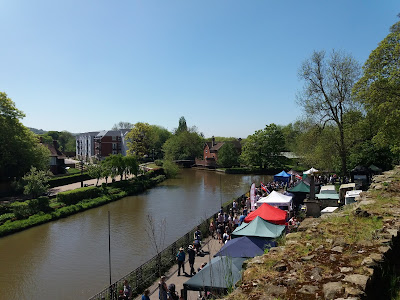 The whole industry was highly unionised, with each branch of the different print unions involved in the trade, presided over by an all-powerful “father of the chapel.” These individuals had the power to make or break a company, so they tended to be treated like royalty by both workers and management alike. That tale of the absentee print worker, still getting paid, was commonplace, as were stories of  fictitious workers (M. Mouse and S. Claus?) clocking on, and getting paid.
Much as I detest Rupert Murdoch, he was the person who finally broke the power of these corrupt and restrictive unions and dragged the whole printing industry kicking and screaming into the modern world. Murdoch had deep pockets and could afford to sit out the many shut-downs and walkouts which resulted from his attempts to modernise the trade. The introduction of digital printing was probably the final straw.
Housing developments now occupy the sites of the three former large printing and publishing companies in the town. Whilst I have some sympathy for the workers who lost their jobs as a result of these "sharp practices." I have nothing but contempt for the corrupt and manipulative shop-stewards and their shady print union bosses,  who allowed power and greed to sow the seeds of their own demise.
Posted by Paul Bailey at 23:56

"as the barmaid reached under the counter and retrieved the three quarters full pint she'd pulled through earlier and topped it up."

I do believe I've been in there, way back in the mid 70's. Can't remember much about it though so obviously it didn't stand out. :)

"I expressed an interest in going across to Heusentamm to help assist the group with their stall at the town's Christmas Market, "

So that would be another trip to Germany? Good on ya. :)

Also, are you thinking of retiring there? I seem to recall that from earlier posts.

"The introduction of digital printing was probably the final straw."

And it's ironic how the tighter their grip becomes (no matter the trade) the more that tends to slip through the fingers.

Hi Russ, sorry for the late reply but I’ve been busy packing and sorting out a host of last minute things for my North American trip.

Did you mean you’ve been in the Chequers in Tonbridge, or were you referring to having experinced a similar incident to mine with regard to the beer?

A visit to the Christmas market at Heusentamm would indeed count as another trip to Germany, but it’s early days yet, and with the run-up to Christmas being such a busy time, there’s a possibility it could clash with something else.

I may have mentioned retiring to Germany, some time ago, but unfortunately a rather foolhardy referendum has got in the way. At the moment, UK pensions are paid direct to UK citizens living elsewhere within the EU, and there are also reciprocal health care arrangements. This could all change thanks to the gaggle of “Little Englanders” who are intent on dumping us out of the world’s largest trading bloc, just to suit their own rather narrow-minded agenda, so who knows at the moment.

And finally to restrictive practices; they have a habit of being counter-productive and often end up hurting the very people whose interests they are supposed to serve. People involved in the print trade found that out the hard way, but there are plenty of other examples.

No worries on late replies Paul at any time mate. :)

I thought that I'd been in the Chequers back in the mid 70s, but it turns out it was the Chequers in Sevenoaks. :)

I've been in the Bullfinch in Riverhead as well. Had lots of family who lived in Sevenoaks back then. Came over to visit in '75 as well as '80/'81.

Good luck with the upcoming trip.

I like the Chequers in Sevenoaks. It has a similar outward appearance to its Tonbridge namesake, but isn't quite as old. The beer rang is definitely better though, and there are several nooks and crannies where it's possible to hide yourself away.

The Bullfinch is interesting, as it's one of the few pubs south of the Thames to be owned by Hertfordshire brewers, Mc'Mullens. Not many people rate their beer though; but the same applies to Donnington.