Amtrak across the USA. Part One - Richmond V.A. - Washington D.C.

In one of my previous posts I wrote of my plans to undertake a "railroad trip" whilst over in the United States for the Beer Blogger's Conference, and as I write I'm on the final leg of my long haul train ride from Washington to Chicago.

It's been quite a journey, but all things considered a favourable one. As many people know, long-distance rail travel in the US is run by Amtrak, and despite the fairly drastic pruning of passenger services within America, the organisation still operates quite an extensive network.  There is a catch though, as most of the long-distance routes only operate one train a day. 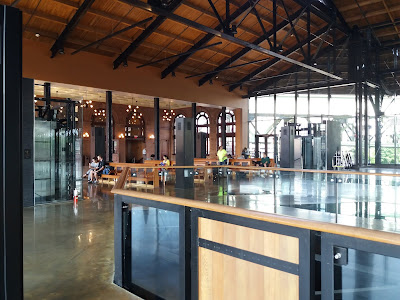 My journey started in Richmond Virginia, where I'd spent a very enjoyable, but rather hectic day in the company of my fellow bloggers, visiting some of some of the city's many breweries, and sampling a few of their wares. The following morning I took the courtesy bus from my hotel, along to Richmond's recently restored Main Street Station.

I arrived early, so wasn't particularly surprised to find only a handful of fellow passengers sitting in the waiting area. The train pulled in more or less on time and I boarded the rear Business Class coach, where I had a pre-booked seat. Quite a few more passengers boarded at the next stop - Richmond Staple Mill Road Station, but it wasn't until the next station that the train started to pick up speed. With a journey time of just over three hours, this was  more of a commuter service than a long distance one, which was probably why Wi-Fi was available  on the train. 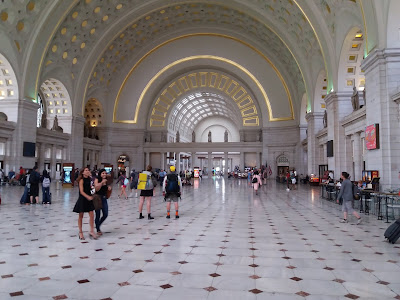 We had a pleasant ride into Washington Union Station and before the train disappeared underground, there was a view across to the Capitol Building and other associated landmark government structures. I disembarked, and with two and a half hours before my connecting train to Chicago was due to depart, I had a bit of time to kill.

As I was travelling all the way to the "Windy City," I discovered it was possible to check my baggage in - rather like on an airline. This was a relief as I was travelling  with a bulky and quite heavy suitcase. Free of my burden, I had time to look around  the magnificent station concourse, now fully restored to its former glory. 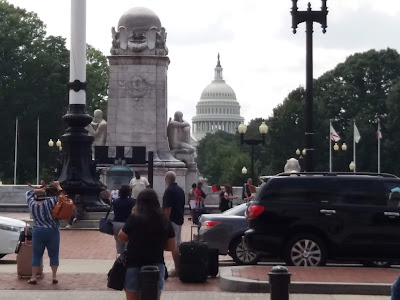 I took a look outside too, where I had another  view of the Capitol Building,  but as it was rather hot and humid out, and also looked a lengthy walk away, I decided to stay put. I bought some water and nibbles for the journey and waited for my train to be called.

The Amtrak service between Washington D.C. and Chicago is called the "Capitol Limited" and given the length of the queue which  emerged when the gate and platform were announced, I was glad I'd decided to stay put. There was a 15 minute delay in boarding, which was frustrating, but once the gate was opened I found my way to the right car and waited to climb onto the train.

Amtrak have it all organised, with staff  stationed at the entrance to each coach. Your bar-coded ticket is scanned and your name is ticked off the list. I had booked a "roomette" in the sleeper section of the train, so found my compact little room, which had two facing seats, which when the time came could be converted into a bed for the night. There were pillows and bed-linen, stowed away in an upper fold-down section, which can be used if there are two persons travelling together. 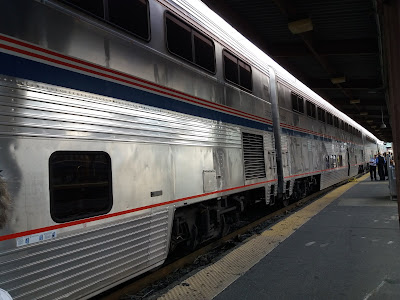 Personally I think that would be pushing it, as whilst everything in the compartment was ergonomically laid out, it was still quite a squeeze accommodating one person. Each roomette is well-equipped with a folding table, power socket and adjustable lighting and heating/air conditioning controls, and I have to take my hat off to the designers for their ingenuity.

So with the train pulling out of Union Station, on a very hot and humid Monday evening, and passing the commuters waiting for their homeward bound Metro trains, it's time to take a break from my Amtrak journey for a short while, and reconvene next time.

Was your accommodation seriously called a "roomette", Paul? How delightfully American. I love it.

There's a perfectly good English diminutive suffix, which would have given "roomlet", but hey, that perhaps doesn't have the graceful connotations of La Belle Epoch's French "-ette", does it?

Did it live up to them?

Yes E, that was seriously the name of the sleeping compartment. Ergonomically designed to make optimum use of available space, but I managed to sleep surprisingly well.

"Compact and bijou," if we want to continue with the French metaphors, but the correct name surely should be a couchette.

"but as it was rather hot and humid out, "

Myth has it DC is apparently literally built on a swamp. But even if not, it's bloody hot and humid there every summer.

"Each roomette is well-equipped with a folding table, power socket and adjustable lighting and heating/air conditioning controls"

Thank goodness for the A/C!

Missing a 'd' at the end there.

"We had a pleasant into Washington Union Station"

Need something after pleasant.

"it was still a quite squeeze "

I think quite should be tight (you were typing this on the train, weren't you?). :)

I was typing the piece on the train Russ, but posted it the night before last - after several beers .

Am back in England now on my way home from the airport.

Or, from my point of view, welcome back over there. :)

It was a bit of a shock getting up for work this morning, as my body is still operating on East-Coast American time. In case you hadn't guessed, I’m not quite with it. However, I’ve managed to correct all the typo's which Russ pointed out, and also one that he missed, so I must be doing something right.

I’ll be aiming to get another post up this evening; once I’ve sorted out my on-line banking and gone over the shock of how much I spent – but hey, spoiling yourself is part of the fun of going away!

"and also one that he missed"

I gave up after finding four (just kidding!). :)


"but hey, spoiling yourself is part of the fun of going away!"