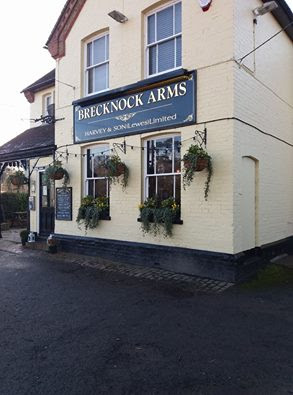 Yesterday lunchtime (Sunday), Eileen and I joined a dozen or so other local CAMRA members and friends for the West Kent Branch annual Christmas meal. Following last year’s successful event we returned to the atmospheric Brecknock Arms at Bells Yew Green, which is just five minutes walk from Frant station.

Travelling by train allowed all those who wished to, the opportunity to enjoy some of the excellent Harvey’s beers which are on sale at the Brecknock without having to get behind the wheel of a car. At the risk of not sounding too self-righteous, this also fitted in well with the branch ethos of making full use of public transport wherever possible.

I have known the Brecknock for the past twenty-five years. It is a small and comfortable Harvey’s pub, just one stop down the line from Tunbridge Wells. It has been altered a few times over the years, principally to make better use of the available space, and whilst this involved combining the former public and salon bars, the layout is such that there are still a number of distinct drinking areas. 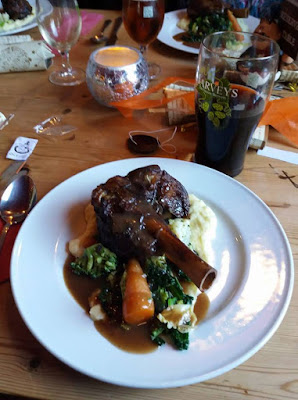 Bells Yew Green itself is a tiny village on the B2169 road which runs between Tunbridge Wells and Lamberhurst. The pub is the focal point of the village and as well as providing a place for the local cricket team to meet, is popular with both villagers and people from further afield. Given its location on the main London - Hastings rail line, Bells Yew Green has become increasingly popular location for commuters, and in recent years a number of new houses have been built, along with a village shop.

The Brecknock therefore provided the perfect location for our lunch, combining the relaxed informal atmosphere of a village local with good food and equally good drink. Like last year, the weather was again unseasonably mild, so there was no need for the landlord to stoke up the fire much beyond the level of “just smouldering”. An open log fire though does add to the atmosphere, and with the Christmas tree and a few other tasteful decorations, the pub was looking suitably festive. 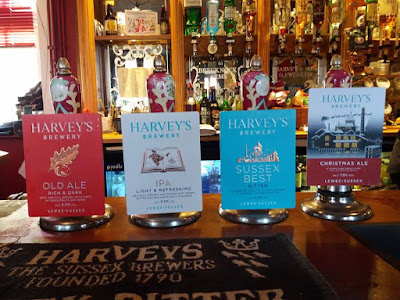 I decided to be a bit different this year, so opted for the braised lamb shank, whereas Eileen stuck with the traditional roast turkey. Both were very good. The beers were also in fine form, with the IPA and Sussex Best being joined on the bar by XXXX Old Ale and draught Christmas Ale. We have the licensee to thank for the latter as he drove down to Lewes specifically to collect a cask from the brewery, as apparently Harvey’s have been a bit late this year in getting the Christmas Ale out to their pubs.

I sampled three of the four beers on sale; ignoring the IPA which I have never been particularly keen on. The Old went well with my main course, and after the dessert I gave the Christmas Ale a try. This excellent 7.5% ABV seasonal never fails to disappoint, and you have to admire Harvey’s for managing to squeeze so much hop character into a beer of this strength. 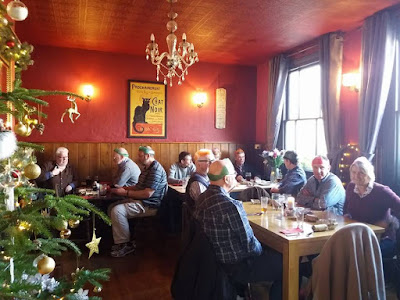 There was a lively crowd hanging around by the bar, along with a family group who were eating in the former saloon bar area. It was good to see the Brecknock comfortably busy, as it really is everything a village pub should be.

We left the pub, shortly before 4.30pm, to catch the train back to Tonbridge, after what had been a most excellent afternoon and, for me, my second Christmas meal in three days!
Posted by Paul Bailey at 20:28

That's sounds a proper Christmas lunch Paul.
At about the same time Mrs Blenkinsop and I were sat in 25C glorious sunshine in the Tenerife capital of Santa Cruz sipping Leffe Tripel and eating a bowl of prawns in garlic oil with crusty bread rolls.
It was our first time in the capital - over the years like most tourists with kids we've headed south.
But what a gorgeous place it was with interesting restaurants and bars,wonderful food and friendly locals who - always a good sign - didn't speak much English.
Although not a great beer destination - you really had to search to find anything interesting bottles - the price of wine and food in the restaurants more than made up for this.
Still,your selection of Harvey's ales does sound interesting.
I hope you have a good Christmas and thanks once again for your walking tips earlier this year when I had a fantastic couple of days exploring Kent.

It was definitely a proper Christmas lunch, Stanley. Mind you, yours sounds pretty decent too, especially the 25° C sunshine.

I agree that getting off the beaten track, and finding a place where the locals hang out, always pays dividends. Even if they don’t speak much, or even any, English you can always get by, and there is normally someone who will help you with the menu.

Glad you enjoyed the Kentish walks, earlier in the year. I am planning a few rambles myself over the Christmas-New Year period, and will probably end up writing about them.

Have a great Christmas.