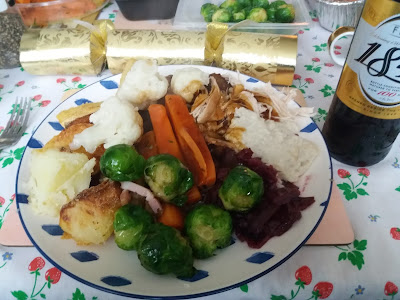 Well that’s Christmas over for another year, and I can’t say I’m sad to see the back of it. It’s the same every year, with Christmas becoming more and more commercialised, but on the plus side I was at least able to spend some time with the family which, when you’re all working, isn’t always easy. There hasn’t been much happening on the beer front either, which is another reason why I haven’t posted on the blog for the best part of a week, although there’s enough beer indoors to float a battleship. However, as I’ve said before, I never seem to drink anywhere near the amount of beer at home as I would do in a pub. 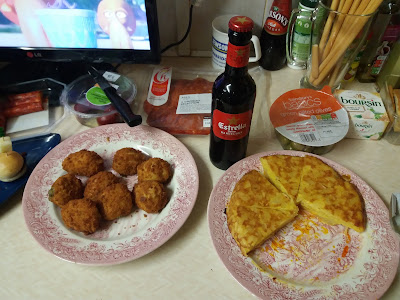 Christmas Eve kicked off with a Spanish-themed evening meal – tapas and tortillas, so to go with the food it seemed only right to have some Spanish beer. Strictly speaking Estrella Dam is Catalan rather than Spanish, but it brought back memories of two pleasant trips to Barcelona, and as the beer was on offer at Waitrose when I picked the turkey up the night before, that was the decision made. It’s difficult to miss the forest of conical fermenters and maturation vats, which form part of the massive Estrella Dam brewery, on the drive into town from the airport, and the ubiquitous brand can be found all over the Catalan capital. However, it’s pleasant enough for an industrial lager, and it went well with the food. 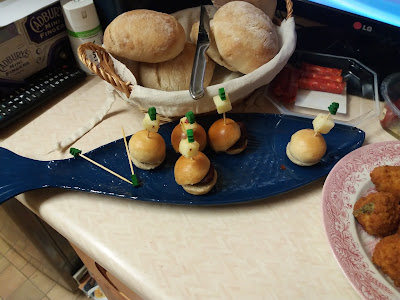 Later on in the evening, I switched to a bottle of Harvey’s Old Ale. A couple of work colleagues had combined together to buy me a crate of Harvey’s beers as a Christmas present, so I thought I’d give one of them a try. It’s always puzzled me as to why Harvey’s go against the grain and brew their bottled beers at a lower strength than the draught versions, but even though the bottled Old came out at just 3.6% ABV, as opposed to 4.3% for the cask version, it still tasted good, with the lush sweetness from the dark brewing sugars used in the beer coming through.

We all overslept the following morning, so much so that my wife and I didn’t surface until 10 o’clock. The turkey was late going into the oven, so Christmas dinner wasn’t served until 2.30 pm. No matter, none of us were in a hurry, and there were presents to unwrap and other preparations to be carried out first. It was getting on for two o’clock before I cracked open my first bottle, which was Worthington White Shield; a nicely balanced beer with a slight “nuttiness” from the residual malt sugars. The beer was a good aperitif and went well with our traditional roast turkey dinner. Not long after I stepped up a gear and switched to a bottle of Fuller’s 1845; a long-standing favourite of mine, and a beer I have enjoyed on several previous occasions with my Christmas meal. 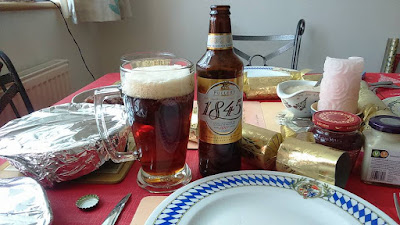 We were all feeling rather full from our meal, so we passed on the Christmas pudding; we enjoyed it on Boxing Day instead, and it was a while before I was ready for another beer. Our son had disappeared to call round on a friend, so come the evening we started on the cheese and biscuits. We decided against opening the blue cheese, so stuck with the cheddar. The only problem was which beer would go with it? I’d left a few bottles of beer out on the back step to chill, and amongst them was a bottle of Westerham Audit Ale. At 6.5% the beer wasn’t too strong, and as I thought it went well with the mature cheddar we’d bought. After that it was a cuppa tea. Finally I finished the day with something light and refreshing – a bottle of Estrella Dam, left over from our tapas evening the night before. 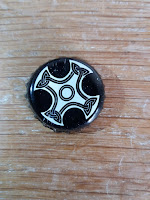 Boxing Day saw my son and I disappearing over to Tunbridge Wells for a quick look round the shops. I wasn’t keen to go, but Matt had a voucher to spend. I ended up buying a CD, which is still in its wrapper, but when we arrived back home, my wife had prepared what for her, and me as well, is one of the best meals of the Christmas break; bubble and squeak (the previous day’s left-over vegetables), cold meats (primarily turkey), with a selection of pickles. 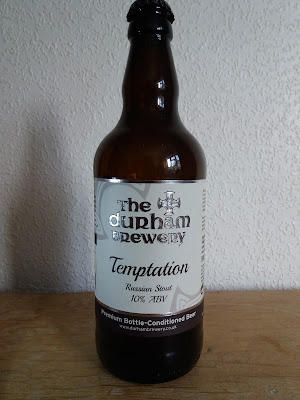 A bottle of Harvey’s excellent Tom Paine Ale 5.5% ABV, went down well with the meal and was sufficient until the evening. Some time around 9pm it was time to serve up the Christmas pudding which we had missed the day before. I had a special beer to accompany this, in the form of Temptation, a 10.0% Russian Imperial Stout from the Durham Brewery. This thick, oily and jet-black bottle-conditioned beer is described as being a good match for dark chocolate. I surmised that it would also go well with Christmas pudding, and I was right. The rich coffee, liquorice and chocolate flavours in the beer, balanced by generous amounts of Golding hops, blended well with the preserved fruits in the pudding, but at 10%, and a 500 ml bottle at that, one was enough!

Compliments of the season to everyone, and please bear with me whilst I catch up on my writing.

As each year goes by my attitude towards Christmas has gone from disinterest after the kids became adults to outright loathing of the whole false mince piety and forced jolliness of the so-called " festive " season.
I hate every moment of it,from the first sighting of Christmas retail themes in late summer to the predictable " what to do with the turkey leftovers " in every post-Christmas Day newspaper,magazine and TV cookery show.Yeah,I know.Curry the bloody stuff.
I begged my wife to let us hop on a plane and go somewhere hot and non-Christian but as usual she won out.
On the plus side I beat my own record for the cheapest Christmas meal for a family of four - bringing it in at a miserly £12.50.
A nice piece of pork on the bone with thick crackling being I negotiated down to £6 by a butcher keen to close up shop at my local market on Christmas Eve.Vegetables from Lidl cost a couple of quid,cream another couple more to go with the Christmas pudding I won in a raffle last year and never used and the wine was donated by grateful customers of our business.
And £2.50 on a nice block of Brie from Aldi.
This was the only thing that really cheered me up this Christmas.
Fortunately I always have January to look forward to when the pubs are quiet with everyone on the dry and no sign of once-a-year idiots in Christmas jumpers.
Still,mustn't grumble ...

My wife and I have often expressed the desire to jet off somewhere and escape Christmas. The trouble is our twenty-something son, who still lives with us, works in retail and is unable to take any annual leave over the Christmas period. It would be mighty mean of us to leave him on his own at Christmas, of all times, so we endure the whole ghastly ritual.

I don’t actually mind Christmas Day itself, and enjoy the feasting along with spending time with my immediate family. It’s the build-up to it all which, as you rightly point out, begins at the end of September. If I never hear Slade and/or Wizard belting out their 40 year old Christmas “hits”, it will be too soon.