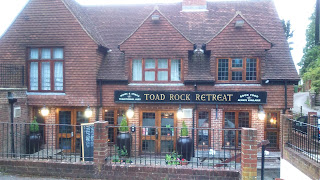 It was a disappointing turnout for last Thursday night’s CAMRA social, with just three of us making the trip over to the village of Rusthall, near Tunbridge Wells, for a visit to the recently refurbished Toad Rock Retreat. Later on we were joined by two other members, one of whom lives locally; but it was still a poor show for a branch which can boast over 500 members!  However, the bulk of West Kent CAMRA members who, for whatever reason, couldn’t be bothered to turn out missed a really good evening, in a nice pub whose appeal is added to by its unique setting.

Rusthall is located approximately 2 miles to the west of Tunbridge Wells, in what is really a continuation of Tunbridge Wells Common. Much of the village is hidden among trees and is surrounded by some quite impressive sandstone outcrops. The latter became quite a tourist attraction in Victorian times, when visitors were brought up from the station in coaches or “charabancs” to see the rocky outcrops.

The most famous of these outcrops is the “Toad Rock”, a natural rock formation which looks like a sitting toad, resting on an outcrop of sandstone, and what makes the “Toad Rock” appear even more impressive is its setting in the natural amphitheatre created by the surrounding rocks. The rock formation is not man-made, but was eroded into its current shape by action of both wind and frost during the last Ice Age. The first known record of the rock's name is in a guide published in 1823; although the rock itself was first popularised in a local guide published a decade earlier. The fencing around the rock's base was first installed in 1882 and was renovated in 1993-94.

The Toad Rock Retreat is literally just a short hop from the famous rock formation which gives the pub its name, and whilst I have been there on several previous occasions, I hadn’t realised quite how close it is to the main A264 road out of Tunbridge Wells.  The 281bus provides a convenient half-hourly service into Rusthall from the centre of Tunbridge Wells, and just one stop along Rusthall Road is a footpath which leads down to the area known as Denny Bottom, where the Toad Rock is situated.

The Toad Rock Retreat was refurbished at the beginning of 2016, and has taken on a new lease of life under the stewardship of experienced licensees, Nick and Shelley, who were previously in charge of the Dovecote at Capel. I am unsure as to the age of the pub, as it was completely rebuilt, after being destroyed by a disastrous fire in 1998, but it is an attractive-looking building, nevertheless.

The pub was re-constructed in a style which matched the original, and consists of a brick structure, which is part tile-hung. Internally there is a double open-sided wood burning fireplace which separates the spacious main bar area, from a peaceful snug section containing comfy leather seating set around the fireside. There is a dining area to the left, which includes cosy tables lit by fairy lights intertwined around internal branches attached to the walls.

There were three cask beers on sale; Harvey’s Sussex Best, Taylor’s Landlord, plus a slightly unusual guest ale from Hartlepool-based Camerons. Sleeping Brew Tea is a 4.4% amber coloured pale ale, infused with “Sleeping Beauty Green Tea”. This, according to the pump-clip, gives the beer a gentle raspberry and rose taste and aroma. Two of our party tried it; I stuck with the Harvey’s which was in such excellent condition that it stood out as the pint you could drink all evening (NBBS 4).

We spent around two and a half hours at the Toad Rock Retreat, chatting and enjoying the beer. The pub had been quite busy when we arrived, but towards the end of our stay, people (mainly diners), began to drift off. The food on offer looked good, which is no surprise as Nick and Shelley were well-known for providing good fayre at the Dovecote. Nick was genuinely pleased to see us, but it was a shame there were so few in our party. Still, the couple are happy with the way the pub is developing; as are I’m sure the locals, after the period of uncertainty under its previous tenants.

We departed just before 10.30pm, this time walking up the aptly named, Harmony Street to the bus stop. We had around half an hour to wait in Tunbridge Wells for our connection back to Tonbridge, so we nipped in the Bedford for a “quick one”. My drink of choice was Pig & Porter, Slow Black Stout, which turned out to be a cracking beer and just right for ending an excellent evening’s supping!

Footnote: There is another part to Rusthall which is distinct from the Victorian era tourist resort created around Toad Rock. The other section lies to the north-west, and is set around Lower Green; the oldest part of the village and said to date from around the 8th century. There are many attractive walks across Rusthall Common, towards either Speldhurst or Southborough; both walks completely avoiding the built-up areas of Tunbridge Wells.

It is quite easy to get lost around here though; even with the aid of a good map, as my friend Eric and I found out when we were walking the Weald Way, six years ago.

That's a new one to me Paul. Those rocks are really impressive as you say. I visited the Beacon here years ago, it may well have been where I remember having a great Harveys winter beer. I see on WhatPub it's reopening soon.

The Beacon re-opened a few months ago, Martin. I haven’t been there yet, but from the website it looks as though a fair bit of money has been spent on it. It’s in a lovely setting, and its location – at the end of Tea Garden Lane, always intrigues me.