The Plough at Leigh 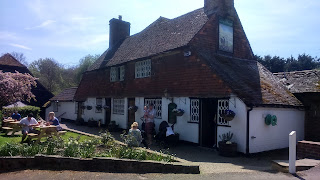 The Plough at Leigh Powder Mills is a pub which has been on my radar for a long time; in fact I have been visiting it on and off for the past 30 plus years. It is an attractive, part tile-hung, 16th Century building, set on a bend a mile or two from Leigh village. It has gone through several changes of ownership over the past three decades, but has always been a popular place to visit for the people of Tonbridge and the surrounding area.

I don’t know that much about the Plough’s history, but I do know that up until the mid-1970’s, it was a simple country ale house, of the type which was once very common in this part of Kent. My wife remembers it from that time, as her parents used to walk out there with her and her siblings for the occasional drink in summertime. I recall that when I moved back to Kent in 1979, the Plough was one of several pubs in the area stocking Samuel Smith’s Old Brewery Bitter, and it was worth a visit for that alone.

Sam’s pulled out of Kent a couple of decades ago, and now confine their sales in the South-East, to the area within the M25 motorway; but the Plough was always well known for its beer, and was a regular lunchtime haunt for my colleagues and I when I first worked in Tonbridge.

Getting to the pub is easy; especially for those who are walking or cycling. The initial stage of the route follows the path across Tonbridge Sportsground and on towards Haysden Lake (see previous post), but by turning off to the right, along a tarmac path, one eventually comes out in the area known as Leigh Powder Mills.

From the middle of the Napoleonic Wars until 1934 the Leigh Powder Mills site was used for the production of various types of gunpowder and other explosives. Production at what became known as the "Tunbridge Gunpowder Works", reached its maximum output during the First World War, and in the 1920’s the business was acquired by ICI. The following decade, the company moved all its explosive manufacturing to the west coast of Scotland, where there was far less danger to the local population, from explosions.

The mills used to ground the powder were powered by water, and it was by water-borne barges that raw materials were brought to the site and the finished product shipped out. Little remains today of the former workings, although until five years ago, pharmaceutical giant Glaxo SmithKline (GSK), had their research laboratories and pilot-scale production facility on the northern part of the site. The final stage of the path to the Plough passes the former GSK site, which is now being developed for housing. 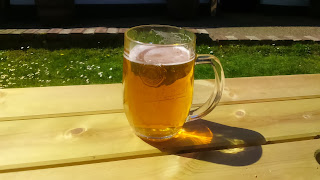 On this occasion though, I arrived at the pub by road; having cycled up through Tonbridge and then into Hildenborough. This was all part of my scheme to increase my fitness levels, and my original plan had been to cycle a fair way further, up to the Windmill at Sevenoaks Weald. I hadn’t bargained for temperatures in the mid-20’s though, and having left the house without any sun protection, I decided to divert to the Plough instead.

This was a smart move, as the lanes leading down to the Powder Mills are quite leafy, so there was ample shade, but even so I was quite parched by the time I reached the pub and looking forward to a beer. After locking my bike, I headed into the bar, eager for something cool and refreshing. The warm weather had obviously brought everyone out, and there was quite a queue to get served. I spotted Tonbridge Coppernob and Musket Trigger on cask, and was quite tempted to go for the latter until I saw the fount for draught Pilsner Urquell. I noticed several other people drinking it – easy to spot because of the distinctive barrel-shaped brewery-styled glass, so even at £4.90 a pint I opted for a beer which would really cool me down. 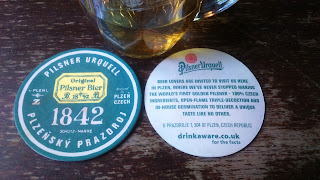 After being served I walked round to the substantial garden at the rear of the pub. Unsurprisingly, given the weather, all tables were taken; as were the tables at the front of the pub – or at least the ones with a bit of shade. I wandered back inside, and found a seat close to the massive, double-sided open fire place which divides one part of the pub from the other.

The Plough has the sort of low-beamed interior one would expect from a pub of this age, but I was just glad of the chance to sit inside, away from the heat of the sun. My beer was excellent, and just what I needed after my cycle ride. Being Sunday lunchtime, the pub was obviously busy with diners, and the food I saw being dished up, looked most appetising. 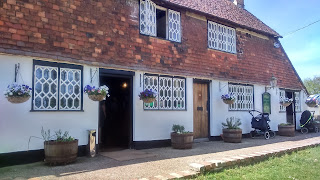 I decided to restrict myself to just the one pint, so after finishing my beer I paused to take a few photos, before retrieving my bike and heading for home. I followed the off-road route outlined earlier, which was not only much quicker than along the roads, but also much cooler. I’ve a feeling I’ll be calling back at the Plough this summer; now that my bike is back on the road.

Hello Everybody,
My name is Mrs Sharon Sim. I live in Singapore and i am a happy woman today? and i told my self that any lender that rescue my family from our poor situation, i will refer any person that is looking for loan to him, he gave me happiness to me and my family, i was in need of a loan of S$250,000.00 to start my life all over as i am a single mother with 3 kids I met this honest and GOD fearing man loan lender that help me with a loan of S$250,000.00 SG. Dollar, he is a GOD fearing man, if you are in need of loan and you will pay back the loan please contact him tell him that is Mrs Sharon, that refer you to him. contact Dr Purva Pius,via email:(urgentloan22@gmail.com) Thank you.