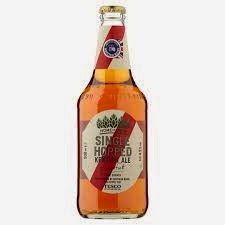 It’s rather ironic that just weeks after blogging, and moaning, about single-hopped beers, I should receive an email from Tesco’s PR people asking if I would like a bottle of their new Single Hopped Kentish Ale to try. Naturally I said yes, but then promptly forgot all about it, until Tuesday, when I arrived back at work after a short, pre-Christmas break in Barcelona; more on that later. Waiting on my desk was a package; oh no, not a customer complaint I thought. (Part of my job involves investigating consumer complaints, and whilst thankfully we don’t get that many, their appearance is never welcome, and certainly not when returning to a full desk load after being away.)

I didn’t have to open the package to realise that, fortunately, it wasn’t a complaint but the bottle of beer I had been promised a week or so previously. So what is Tesco’s Single Hopped Kentish Ale about, and what is the story behind it? Well being lazy, and to save having to type it all out, I will reproduce the press release which accompanied the bottle.

“Tesco has launched a new own-label beer supporting the British Hop Association (BHA). Tesco is the first supermarket to carry the BHA’s logo on its new own-label beer - Single Hopped Kentish Ale – which has been produced in collaboration with UK brewer Shepherd Neame. Following a surge in popularity for US styled craft beers; there has been an increasing reliance on imported hops to the detriment of British produced hops.  The decline has prompted the BHA to contact UK brewers and encourage them to support regional hop growers.”

Ali Capper of the British Hop Association, who is also a hop grower, commented: “The American trend that has led to a worldwide resurgence of interest in craft brewing has been a double-edged sword at home in the UK. The interest in brewing with high quality raw ingredients has helped create jobs in the industry but unfortunately brewers don’t always choose British grown hops. In copying the trend, many British brewers have sought to emulate not only the trend but also the exact beer style. Imports in New World hops have substantially increased in recent years.”


Danielle Jack, Product Development Manager for Beers at Tesco added “Tesco is very proud to be the first major retailer to use the BHA logo on one of our products, helping to raise awareness as well as show support for British hop growers.  It is important that we maintain our British heritage in beer and hop production, highlighting the quality and flavour attributes of home grown hops wherever possible.”

It is brewed using one of the UK’s most famous hops, East Kent Golding and has a “distinct smooth taste with malty undertones, enhanced by uplifting botanical hop notes, a touch of spice and delicate herbal aromas.”

Even before I received this beer I had it in the back of my head that Shepherd Neame were involved in its production. Opening the package and finding the distinctively shaped, clear-glass bottle confirmed my worst fears. Regular readers will be aware that Shep’s are not my favourite brewery, so this was not a good start. However, I was determined to be as objective as possible and give the beer a fair and un-biased review, so here goes.

Amber-red in colour the beer poured without any head. Further more I was unable to detect the “uplifting botanical hop notes, a touch of spice and delicate herbal aromas.” described in the PR release. With a reasonable strength of 4.5%and a pleasant bitter “bite”, I did perhaps feel the beer suffered from the known tendency of Shepherd Neame’s house-yeast to over-attenuate the beer, leaving it rather thin-tasting and lacking in body. Having been brewed by Shep’s the beer is packaged in the inevitable clear-glass bottle. Both Tesco and the British Hop Association need to take this faux-pas up with the brewery, as clear glass is renowned for creating the infamous “skunked” effect, by allowing the unimpeded passage of UV radiation. Shepherd Neame’s Heritage range of beers brewed to old recipes from the brewery archives IS packaged in traditional brown-glass bottles, so there is no reason why the same cannot apply with this new beer. The British Hop Association should also know better; after all the deleterious effects of UV light on hop flavours is well documented.

I don’t wish to sound churlish, but I think it a pity that the people behind this beer didn’t choose a more sympathetic brewer than Shep’s to produce it, but like Marstons, the company are well-known contract brewers, so perhaps the choice of brewers is not entirely surprising. Sorry Tesco, for me, at least, this beer disappoints and fails to deliver on all counts. It will be interesting to see how other beer drinkers react to it, so if you want to give it a try this Single Hopped Kentish Ale is available in Tesco stores priced at £1.89 a bottle.

Pretty much as expected, then, sadly. I guess they're one of few UK brewers that can physically brew on the scale needed to supply a giant supermarket chain.

Also, while the BHA probably mean well, they come across as the UKIP loons of the brewing world. Why should all brewers "always choose British grown hops"? How utterly boring would that be.

Ps. that "skunking" thing about light and clear glass is a complete myth. I don't know why the American bud/lite beer masses are obsessed with it, but I guess they think that any beer with any kind of flavour is faulty (similar to the way the CAMRA drones think that anything with a haze is faulty). Let's not persist that sort of nonsense over here.

Sorry for the late reply, Ashwin. Yes, I think you are right about Shep’s getting the Tesco contract because of their size; although the likes of Greene King or Marstons would have suited equally, and would probably have done a better job!

I’m not convinced by your argument about the “skunking” effect of light on hop flavours though. It’s not for nothing that brewers have traditionally used brown glass to package their beers. From what I have read this is hard scientific fact and not a myth. For example, have a read of what this author has to say. http://www.professorbeer.com/articles/skunked_beer.html