A Short Break in Barcelona 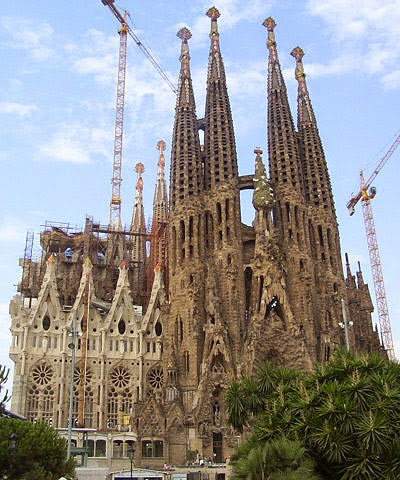 After a frenetic spell of blogging towards the end of last month, I’ve gone a bit quiet. There are several reasons for this; the first being I’ve been extremely busy at work, trying to recruit a replacement for a valued member of my staff who has moved on to pastures new. It’s amazing just how time-consuming this process is. The second, of course, is the start of the build up to Christmas; a process which seems to creep up and catch me out every year. Third, and undoubtedly the most important, has been the four day trip to Barcelona which the family and I made just over a week ago.

It was the first time that any of us have visited the Catalan capital, although I did change trains there, as a student late one evening, back in 1975 whilst Inter-Railing around Europe. Like last years pre-Christmas trip to Prague, our travel times were dictated by son Matthew’s work timetable, where the demands of the busiest period in the retailing calendar demand that no personal leave can be taken during December. Consequently a week ago last Thursday saw us boarding an Easy Jet flight from Gatwick in search of some rest and relaxation, and hopefully some sun, in Spain’s second largest city.

We were to be disappointed on the sun front; in fact we had two days of heavy rain, but at least the temperatures remained in the high teens, and on the tourist front we managed to see a fair bit of the city. We also enjoyed some good local food and were able to sample a bit of Catalan life. Being a family trip, beer not surprisingly didn’t figure too high on the agenda, but nevertheless I still managed to track down and sample some good examples of local beer.

Just over a year ago, Pencil and Spoon blogger, Mark Dredge, wrote an excellent piece on the craft beer scene in Barcelona, but during the rather hectic build-up to our departure, I forgot to print off a copy to take with me. Just a day before we left for Spain, whilst doing some online checking, I chanced upon a bar called Bier Cab, which is listed as Number 4 in the world of the top 100 beer bars in the world. The best part though was BierCab was in the same street as out hotel! Fortunately my wife didn’t realise at the time, the pure coincidence of this, otherwise I could have been accused of selecting the hotel purely on its proximity to this bar. After the subject came up earlier today, at our local CAMRA branch Christmas dinner, she has since changed her mind!

Since my return I’ve found that Mark Dredge had included BierCab in his Barcelona Craft Beer Guide, and having now visited the bar I can well understand why. My opportunity to spend a bit of time there came just over a week ago, on a very rainy Barcelona Saturday afternoon. We had spent much of the morning shopping, followed by a brief spot of lunch. We returned to the hotel to dump our respective purchases, and after several hours traipsing around the shops, both Eileen and Matthew were flagging. I informed them of my desire for a stroll up the road in order to pick up a few bottles of Spanish beer, and asked would they miss me dreadfully if I was to do so?  Of course they wouldn’t, so off I went through the steady, but not too heavy rain. There is something about a wet Saturday afternoon, and it doesn’t seem to matter where in the world one experiences it. I was thinking this as I strode the few blocks up to BierCab, a modern-looking bar housed in an equally modern block.
The place has only been open just over a year, but it has quickly established a reputation for itself which has spread far beyond Barcelona itself. Stepping inside, there was a long room with the bar to the left, and a series of tables opposite. These extended to the rear of the room. As I’d read, BierCab boast 30 taps, with an impressive electronic display on the wall behind to inform punters of the choices available, their strength, colour and cost. I joined the handful of other customers sitting at the bar in true Spanish style, and pondered which of the 30 or so beers to order first. Now, I’m a great believer in keeping things local, so whilst there were offerings from the United States, Belgium, Denmark and the UK I looked for the Spanish offerings amongst this impressive selection.

I started with La Pirata Viakrucis; a 5.6% American Pale Ale, which is contract-brewed at Ca l’Arenys - Cervezas Guineu Micro-brewery, in the mountains to the north-west of Barcelona.  This was followed by a glass of Farmer’s Choice; a 7.6% Strong Golden Ale from Naparbier of Pamplona. My final beer was another American-style pale Ale called Mango, which weighed in at 6.0%. This turned out to be the most local beer on sale at BierCab, coming from the Piris Brewery who are based in central Barcelona.

Whilst sitting at the bar, enjoying these beers, I indulged myself with a plate of nachos, covered in melted Mexican cheese, to help soak up the rather strong beer. One of the barmen at BierCab was from Nigeria; and hence spoke pretty good English. When he found out I was from England he asked me why I wasn’t drinking the beers from Buxton, Magic Rock and Siren which were on offer. I explained my preference for local beers whilst visiting new places, and I think he sort of got it. Sure, I would have liked to try some of the Mikkeller beers for example, but I know that one day I will visit Copenhagen and get to sample them on their home turf.

Adjoining the BierCab bar is the BierCab Shop. It wasn’t open when I arrived, but I expressed my interest to the manager, and was told it would be opening shortly. The shop looked so new, that I took his words as meaning "it would be opening in a few weeks’ time", but as I turned to leave the manager made a point of coming over and telling me that the shop was now open. It would therefore have been rude not to pop in and check out what was on offer. As in all such places I was spoilt for choice, but I ended up buying a couple of bottles, plus one of the coolest T-shirts I have seen for a long time. The latter was a Naparbier garment, and having now checked out the brewery’s website, I have to say their bottle labels also rank as some of the most stunning and coolest I have come across.

To have a top-rated beer bar at one end of the street, could be viewed as coincidence, but to have a brew-pub just five minutes walk in the other direction from our hotel should surely be seen as deliberate influencing our base for the weekend. Again I swear I picked the hotel purely for its central location, its price and its positive reviews and indeed knew nothing about the La Fabrica Moritz just around the corner. The “Moritz Factory” is a brew pub on the Ronda Sant Antoni that occupies the site of the original Moritz Brewery.

The Moritz Brewery was founded in 1856 when Louis Moritz Trautmann, who came from the Alsace region of France, brewed his first beer. Just eight years later, in 1864, Moritz constructed a large modern brewery, which became known as the La Fabrica Moritz. Despite winning numerous awards and surviving the Spanish Civil War, the company hit hard times, closing the factory in 1966 and moving production outside Barcelona to Parets del Vallès.  In 1978 Moritz closed completely, but the beer re-emerged in 2004 when descendants of the Moritz family resurrected the brand, which is now brewed under license in Zaragoza. By re-launching the beer they first brewed back in 1856, Moritz have succeeded in making a dent in Estrella's market dominance, and remain a very visible emblem of the "Catalan Cause".

The old factory building had remained in family hands, and in 2011 underwent a 30 million euro renovation by celebrated French architect Jean Nouvel. Today it houses the company offices, the Moritz Beer Museum, plus a hugely popular restaurant, complete with its own 20 hL micro-brewery. La Fabrica Moritz occupies three floors and covers 4500 m2 in total. In addition to the bar and restaurant there is an attractive Moritz merchandise shop plus a wine bar called "Bar à Vins", where guests have the chance to taste over 400 Calatan and French wines. A bakery has also been opened recently.


Two types of un-pasteurized, fresh Moritz beer are produced on site. The standard brew is a 5.4% pale lager; whilst the second, called Epidor, is a 7.2% amber-coloured lager and, of course, I just had to sample them both! Being un-pasteurised and straight from the tanks, both beers were fresh tasting and enjoyable. The Epidor in particular was full-bodied and very moreish. In what I thought an innovative and novel idea, the restaurant sells draught beer by the litre, but it comes to you table in a flip-top, re-sealable bottle, making it ideal for sharing. This is surely something that other brew-pubs and bars could follow.

With its location in the heart of the city’s university district La Fabrica Moritz is especially popular with students and young people. We visited it three times during the course of our stay; once, in the morning, for breakfast and also on two occasions in the evening. The second of these visits was on our final night in Barcelona, and we had to wait in a queue for a vacant table, such is the bars popularity!

So quite by chance I managed to visit two of Barcelona’s most memorable bars and enjoy some excellent beer and food in both. If you find yourselves in the city, then do give these establishments a try;  I promise you won’t be disappointed.