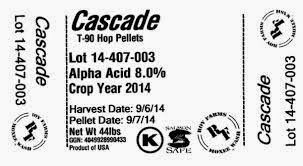 In a recent post I praised the virtues of “Green-hopped” beer, describing this relatively new phenomenon as one of the most exciting developments of recent years in brewing. Unfortunately green-hopping has been paralleled by a less welcome development, and one which to me seems more of a gimmick than anything else.

I am talking about “single-varietal” hop beers, i.e. beers that are bittered with just one variety of hops, rather than the more usual practice of balancing the flavours by using several. I was reminded of this yesterday, whilst browsing the bottled beers on sale in M&S. To my amazement there were five different single variety hop beers on the shelves; each beer being brewed using a different hop variety and by a different brewer.

The hops used are Sovereign, Citra, Brewers Gold (Hallertau), Cascade and Mosaic. The last named hop is a relative newcomer on the scene, following on from Citra and Cascade, which are citrus-flavoured varieties from North America. The brewers concerned are Elgoods, Oakham, Crouch Vale, Castle Rock and Adnams.

I remember M & S running a promotion on the first four of these beers some 18 months or so ago. My wife bought me a few to try, and with the exception of the Citra beer, I was singularly unimpressed. I would describe them as “one-dimensional”, which is hardly surprising. The established brewing practice has been, for many decades, to brew using a combination of hops; adding some for bitterness and some for aroma. There will also be several additions throughout the boil, with bittering hops added to the copper at the beginning, and aroma hops towards the end.

Single varietal hop beers fly in the face of decades of brewing wisdom, so bearing in mind that the varieties used will either be strong on bitterness or strong on aroma, is it any wonder the resultant beers lack complexity and appear very “one-dimensional”.

I am surprised that these five beers still form part of the M&S range. One of our larger local brewers, Westerham, had a rolling programme a few years ago of brewing a different single varietal hop beer every month. I have to say I was not overly impressed with the ones I tried, and the fact they have all been quietly dropped from the range suggests the drinking public thought the same way about them.

We only have to look to the wine industry in order to see similar parallels. A decade or so ago Chardonnay was all the range, with the chattering classes raving over wines produced from this particular grape variety. Several years later, attention shifted to Pinot Grigio. As I’m no longer involved in the of-licence trade, and I probably drink as much wine in a year than your average Frenchman drinks in a week, I have no idea as to which grape variety is the current “flavour of the month”.

What I do know is that whilst very good wines can be produced from a single grape variety (white Burgundies spring to mind here), such wines are usually at the top end of the market, where a whole host of other factors, such as climate, soil etc (the famous “terroir”), come into play. When bog standard plonk is produced from just one grape variety, the results are often less impressive, although much less so than with single varietal hop beers.

The question to ask then is “What future, if any, for single varietal hop beers?” Are they just a fad, or are they an important tool when it comes to educating the beer drinking public about the different varieties of hops that are now available, and the effects they have on both aroma and flavour?

They may not be the most complex beers but they do of course allow interested consumers to learn about the particular characteristics of different hop varieties. As a home brewer I've had good results single hopping with Amarillo, Critra and Golding.

Tring often do a single hop in their rolling monthly specials (this month its Aramis) and they are usually great.

Mind you they are cask and have well thought out malt bills and Tring's lovely house yeast strain.

These bottles are dull because they have no malt or yeast character and are filtered to buggery.

Definitely helps you to identify the hops.I use to think anyone could make a good beer with citra but now realise its the base beer that makes the hops work.Still think the single hop beers are here to stay they just needs tinkering with.just look at the range of flavours you can get from the green hopped beers with only a handful of different British hops. cheers john

The "established brewing practice" and "decades of brewing wisdom" brought us nothing but gallons and gallons of deathly dull 3.5% lifeless brown cask bilge, sorry "real ale".

Those M&S beers were poorly hopped. Try single hop beers from Kernel, Brewdog or Mikkeller or any number of frontline craft brewers. There are huge flavour differences between Nelson Sauvin, Citra, Mosaic, Polaris etc etx. You just need the right brewers to present them.

There is someone on the internet & they are wrong! It's not just hops that give depth of character; yeast & malt can give as much dimensionality as hops & more isn't always - well - more.

There's plenty of great single hopped stuff out there from breweries as diverse as Mallinsons, Crouch Vale and the Kernel. In my experience the more restrained ones - the golden ales as opposed to the double IPAs - often work better on cask than filtered in bottles, but I guess that's oftentrue of golden ales generally.

There's an oft mooted theory in the arts that restricting your palette in some respects can sometimes actually increase your creativity overall by forcing you to figure out ways of doing more with less - maybe there's a version of that at play in some of the better examples here?

Some general thoughts, along with a few replies to people who have taken the trouble to comment on this post.

Beer Nut – I specifically excluded the M&S Citra-hopped beer from the “lacking complexity” category. Also, I certainly wouldn’t say that Fyne Ales Jarla was lacking it but, as this is a beer we rarely come across, here in the “soft south” I would not have known it is a 100% Citra beer unless I first looked on the company website.

This is the main reason I restricted my article to writing about those beers which ARE named after the hop they are bittered with. I singled out the M&S range (with the notable exception of the Citra beer), along with those produced by local boys Westerham, for criticism precisely because they are one dimensional and “lacking in complexity”. These are the beers Joe public will see, and associate with single-varietal hops, and they are sufficiently lacking to make people wonder what all the fuss is about.

Whilst I agree with David’s comment about these beers allowing “interested consumers to learn about the particular characteristics of different hop varieties”, we have to face the fact that not everyone shares our fascination with beer, and that we are preaching here to a small and restricted audience. Much as we would like to think otherwise, most consumers couldn’t care less which particular hops are used in a beer, as long as they enjoy the end result.

Simon, although we will never know for certain what the beers of the time tasted like, it was common practice in late Victorian times to use a variety of hops. I would like to think that many pre-First World War beers were full of both flavour and character, and that the IPA’s, Pales Ales, Porters and Stouts of this period were light years removed from what you so disparagingly describe as “gallons and gallons of deathly dull 3.5% lifeless brown cask bilge”.

What is evident from this discussion is that certain hop varieties lend themselves much more than others in the production of single-hop beers. A hop which contributes both aroma and bitterness will definitely be a winner over those varieties which just posses one of these attributes.

Wines produced from a single variety of grapes are, of course, different because unlike beer, nothing extra is added to wine (apart from yeast, in some instances). Not only must the grape provide the necessary sugars, and in the case of red wines, the colour, it should also provide the right balance of acidity, aroma and mouth-feel.

Hops, on the other hand, are purely the spice for a beer, and as several commentators have pointed out, it is important to get the underlying “base beer” correct first. How the brewer chooses to present the hops is important; but the presentation is definitely dependent on the malts, water and yeast used as well.