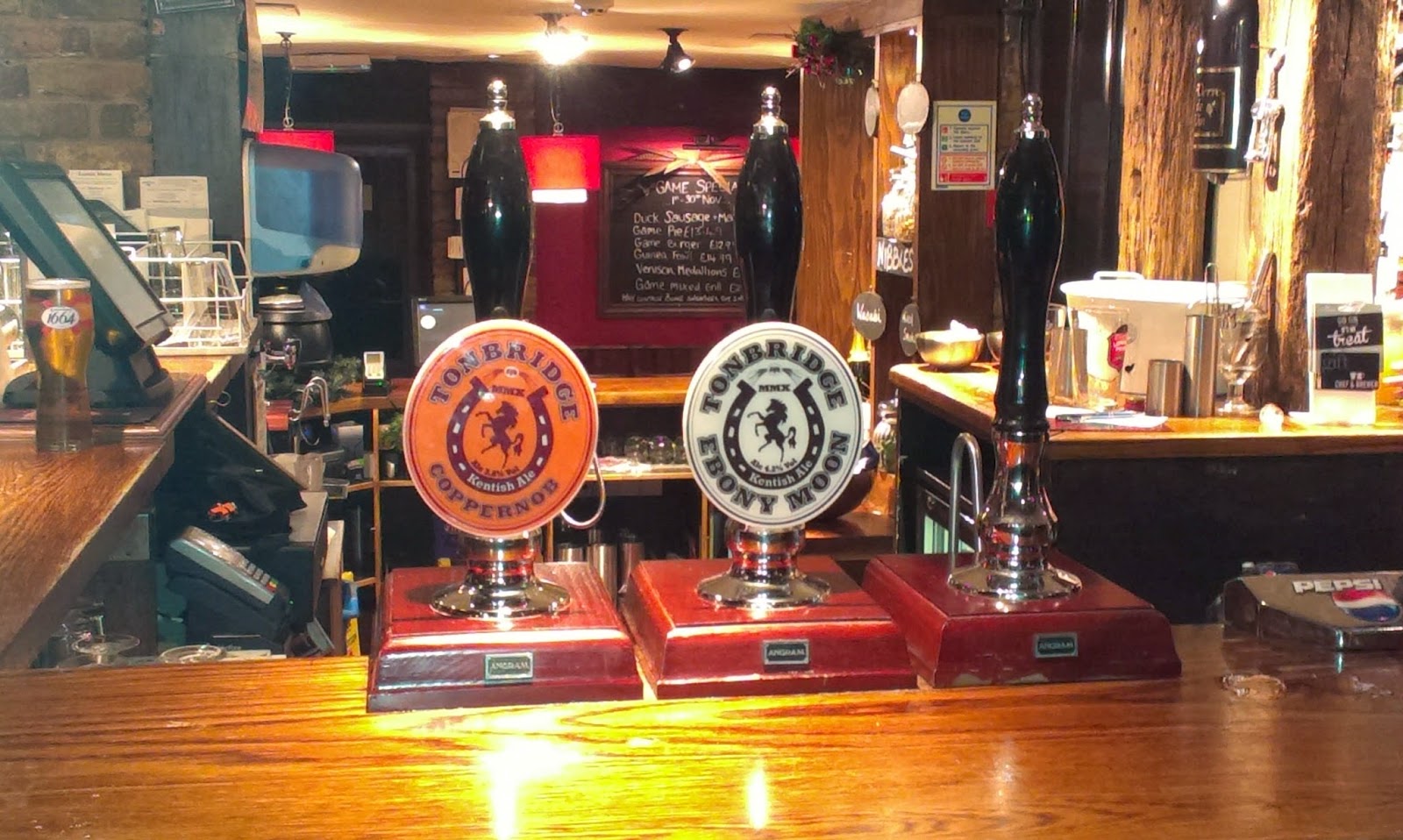 As it is only five minutes walk from where I live, I popped along to the Vauxhall Inn last night in order to attend a “Meet the Brewer” evening. The event was organised by local boys, Tonbridge Brewery in order to promote their beers and to help people learn a bit more about all the things which go into the brewing of a good pint.

Tonbridge Brewery was established in March 2010 by Paul Bournazian in an outbuilding adjacent to his home in Capel, just outside Tonbridge. Starting with a 4 BBl plant, the company rapidly expanded and by April 2013 had outgrown its original home. This precipitated a move to new premises in nearby East Peckham, where a 12 BBL plant was installed.

The company’s aim is to produce distinctive, high quality ales at competitive prices and provide a great service to its customers. The beers are predominantly brewed with Kent grown hops and a strain of live yeast that originated from the former Barclay Perkins Brewery in Southwark. Tonbridge Brewery believe that this yeast adds individual character and great condition to its beers, which have established an excellent reputation with Kentish drinker; with over 200 pubs and clubs now supplied. 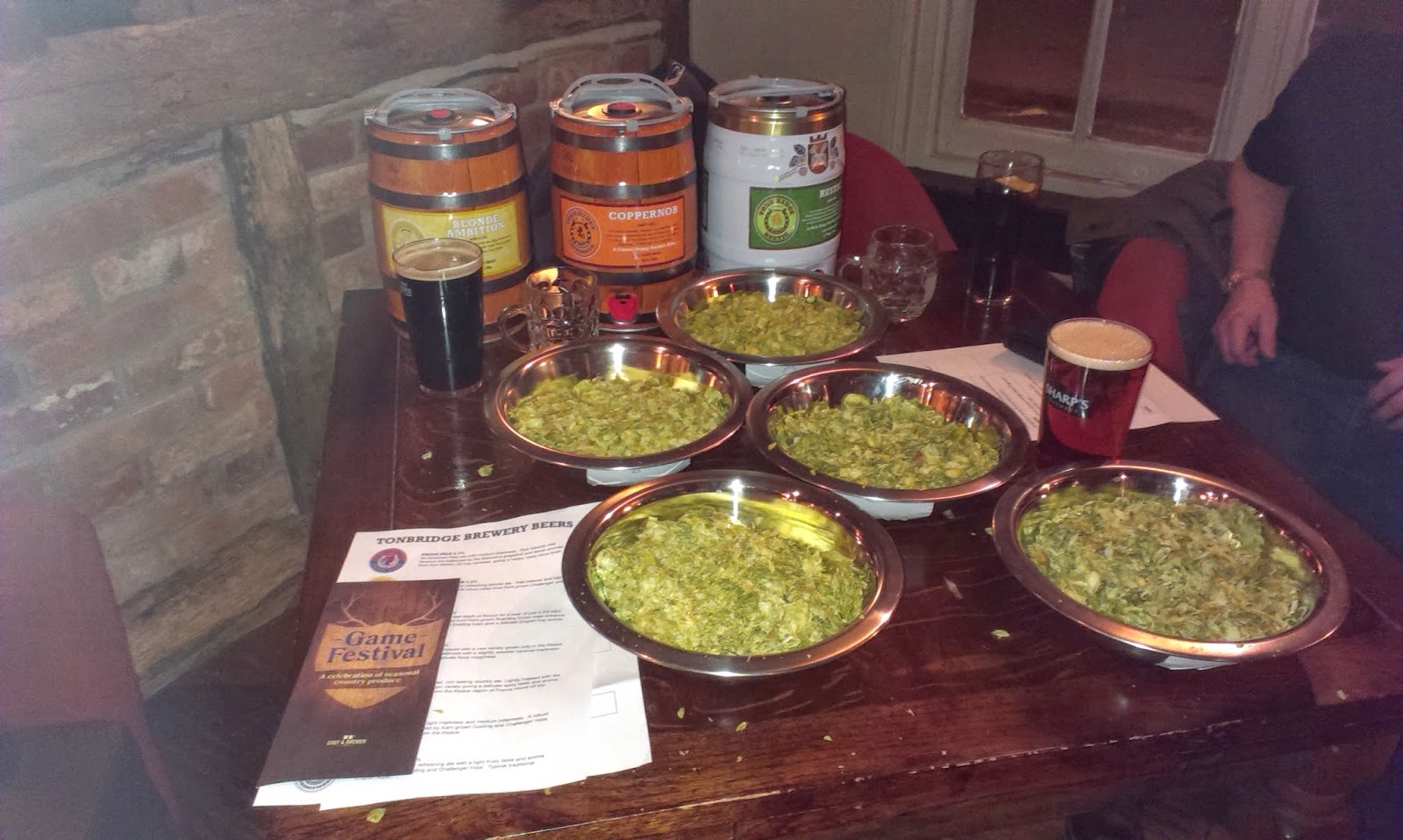 When I arrived at the Vauxhall, Paul and his new brewer Dave had their presentation set up on a couple of tables. All that was needed now were some interested customers. I said hello to Paul, who I have known since he first started out, and was introduced to new boy, Dave. Dave has joined from Old Dairy Brewery, where he was one of a team of brewers who helped create the Old Dairy taste and range. He is now getting stuck into Tonbridge’s range of seven cask beers, and will be working closely with Paul to come up with some new and innovative brews.

Laid out in dishes on the tables were examples of different malts and hops, for people to sample or, in the case of the hops, sniff. The only trouble was apart from me, there wasn't anyone else there to try the ingredients! There were obviously people in the pub, but most of them were either lager drinkers, diners or a combination of the two. Undeterred Paul and Dave decided to wait a while, hoping that a few more people would show up.

I later found out that there was a new pub opening in Tunbridge Wells that night and that most of my fellow CAMRA members were over there. I’ll find out this weekend whether or not the pub was offering free drink! That wasn’t the only factor though not working in Paul’s favour, as whilst the pub had advertised the event, they had neglected to display the start time.

Not a very auspicious start, but I nevertheless spent an interesting evening chatting to Paul and Dave, about brewing, different beers, other brewers plus local pubs and their landlords. There were two Tonbridge beers on sale at the bar; the ever popular 3.8% Copper Nob, plus seasonal dark beer, the 4.2% Ebony Moon. The latter is a rich, dark porter hopped with locally-grown Bramling Cross hops. These impart a blackcurrant taste which perfectly complements the roasted malts used in the beer. I stuck on this excellent dark beer all evening; such was its flavour and quality.

Eventually, just as Paul and Dave were thinking of calling it a night, a couple of drinkers who I’d noticed earlier, sharing a bottle of wine, wandered over to see what the table display was all about. Paul talked them through the different hops (five varieties in total), inviting them to “rub and sniff”. The hops ranged from traditional Fuggles and Goldings, through to aromatic newcomer, Citra. In between were newer varieties such as Challenger and First Gold. One fact which surprised me is that Paul sources his Fuggles from the Alsace region of France, as they are virtually impossible to obtain in this country, due to problems with disease.

He then moved on to malts which form both the body and the colour of the beer, with pale, crystal and chocolate malts for us to try, along with roasted barley. I think the two late-comers left suitably impressed and with their beer knowledge enhanced, but it was just a pity there weren’t a few more punters there to share Paul and Dave’s enthusiasm and passion for brewing.

The Vauxhall Inn, which was the venue for the evening, is an enlarged former coaching inn, right on the edge of Tonbridge, on the old London – Hastings road. Today it forms part of the Chef & Brewer chain, although when I first moved to Tonbridge it was a much smaller, and more basic Whitbread pub. I learned from Paul that the pub is allowed to stock quite a range of different ales, including Tonbridge beers, which are sourced through the SIBA scheme. It was pleasant and relaxing there last night, sitting in front of the log-burner in the surroundings of the heavily-beamed, centuries old bar, and at just under £3.60 a pint, it wasn’t too badly priced for the areas either. I shall be making a return visit; especially if there’s more Ebony Moon on tap!
Posted by Paul Bailey at 22:51

I was sorry not to be able to make it but was up to my neck in other matters. The Vauxhall has been a rather interesting place that has in the past gone up and down in its attitude and support to real ale. I recall that it even got into the GBG one year. Glad to hear it is on the up again

I know, KentishScot, there’s a lot going on at the moment, what with new pubs opening and others under threat of closure, and of course the event clashed with the opening of the new Pantiles pub.

Paul seemed quite philosophical about the low attendance, and is planning to do more of these evenings – he had done a presentation at Sankey’s, the previous week, to Tunbridge Wells’ home-brewers.

Yes, I was pleased with what I found at the Vauxhall; two contrasting Tonbridge beers on tap at prices quite reasonable for the area, and the glasses topped up – without my having to ask!