Pub of the Year and a Ramble

Yesterday being Good Friday was the date for Maidstone & Mid Kent CAMRA’s annual ramble, which this year took place in our local West Kent area. What’s more the walk was to the worthy winner of our branch Pub of the Year 2014, the Windmill at Sevenoaks Weald. For some of us, including myself, this meant two trips to this excellent example of a traditional village pub.

Last Sunday a number of us made the trip over to Weald by bus, in order to present landlord Matthew with his well deserved certificate; whilst today around 20 of us made the journey by foot. We set off from Penshurst station just after 10.30am, and after a very pleasant walk through the Kent countryside, which was at its spring finest, arrived at the Windmill shortly after opening time.

As on my earlier visit, there was a good selection of beers on, but I had no hesitation in opting for the Ranmore Ale from Surrey Hills; an excellent and well-hopped pale ale. Despite the sunny skies, most of us opted to sit inside the pub, especially as the majority of us had ordered lunch. I went for the Goan spicy seafood curry, which had just the right degree of heat, and was a good accompaniment to the beer.

I also tried a pint of former Champion Beer of Britain, Triple fff Pride of Alton which, although good, could not compete with the Ranmore Ale. One member of our party even decided to give a few of the Windmill’s bottled Belgian beers a go, including a bottle of Kwak, complete with its wooden retort stand for the glass! Shortly before leaving, I opted for a half of Goachers Imperial Stout, fetched from the cellar for me by Matthew. It was perhaps fitting to see this beer coming on sale, as amongst our walking party were none other than Phil Goacher and his wife Debbie, proprietors of Kent’s second oldest brewery after Shep’s. 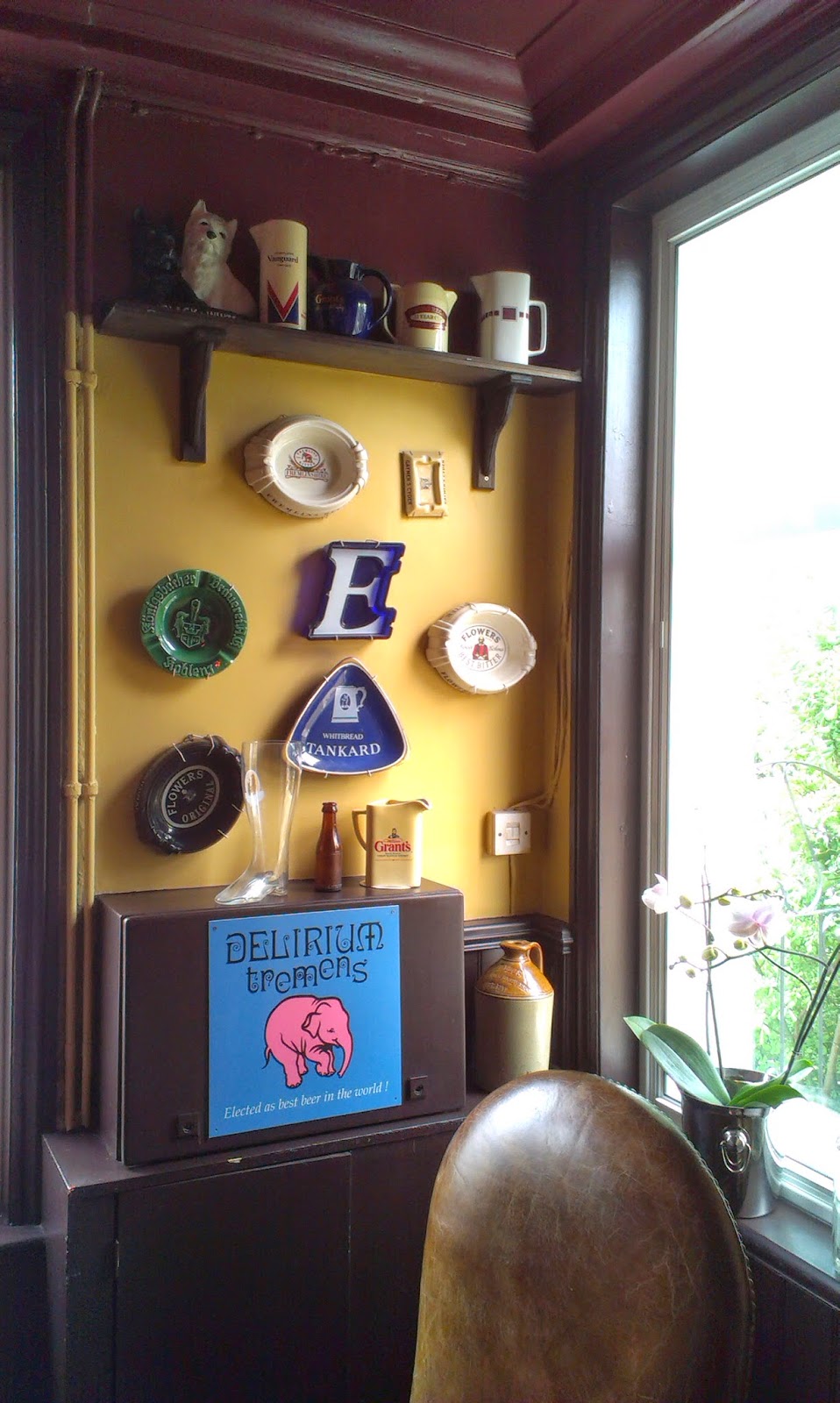 We left the Windmill shortly after 3pm, walking back to Penshurst station by a different and shorter route. Although I am familiar with many of the by-roads and lanes of this area, much of the surrounding countryside was new to me, and it was not until we approached the tiny hamlet of Charcott from the rear that I knew where we were.

Charcott is close to my place of work at Chiddingstone Causeway, and most lunchtimes I walk up towards this small settlement, before veering off across the old Penshurt airfield – the route which leads back towards Penshurst station. We just had time to call in for a swift one at the Little Brown Jug, opposite the station, before catching the train back to Tonbridge. The walk was around 8 miles in total, and unlike the previous year, when temperatures were close to freezing, this year they were in the mid to high teens. It was therefore much more enjoyable, especially as it afforded the opportunity of seeing the Kent countryside at its best. Our thanks, as always to Dick and Pam Wilkinson for organising what must now be getting on for the 40th such annual event!

So what exactly made the Windmill at Weald our branch Pub of the Year? Well, back in 2013 the pub won the award for “most improved pub” in the West Kent CAMRA area, and deservedly so, for the previous year, licensees Matthew and Emma had taken over what was a very run down and failing Greene King pub, and turned it into both a destination pub and somewhere the village could be proud of.

No strangers to the pub trade, the couple had previously run the Stile Bridge, a well-known and highly successful free house, close to the village of Marden. The Windmill caught their eye as they had been looking for somewhere a bit closer to their children’s schools, so when Greene King put the pub on the market, it seemed the ideal opportunity.

A lot of hard work followed before the pub was in a state where it could re-open for business. The interior was completely stripped out, and then re-fitted and decorated in a style which was sympathetic to the Victorian building. The walls are adorned with old brewery advertising plaques, many of them extolling the virtues of Belgian beers. The traditional feel is enhanced by dividing up the interior with various high-backed wooden settles and benches. A couple of fireplaces provide warmth during the winter months. The transformation was completed by painting the exterior in a two tone cream and dark-green colour scheme. The result is a cosy and comfortable pub which is a delight to visit, with much to offer the toper and gourmet alike.

On the drink front the Windmill has six hand pulls dispensing a range of well-chosen beers from independent brewers, sourced mainly, but not exclusively, from Kent or neighbouring Sussex. Local ciders and perries are also available, alongside a range of bottled Belgian beers. Even the lager drinker is catered for by offering them something rather better than the usual bog-standard pub fodder of Carling, Fosters or Stella. Instead the Windmill sells Cristal, a 4.8% pale lager from Belgium’s Alken-Maes Brewery.

The latter is served in its own attractive branded glass, and like a growing number of pubs these days, the Windmill has other branded glasses, including ones from Harvey’s, Longman and Sambrooks. On the glasses front, Matthew was so pleased at learning of the Windmill’s Pub of the Year achievement that he ordered a quantity of special “Windmill-branded” glasses, which proudly advertise the award, and what’s more the glasses are CAMRA-approved, oversize ones, so definitely no short measures here!

Last, but by no means least is the food. I have eaten at the Windmill on a number of occasions; most recently on Friday, and each time have thoroughly enjoyed the comestibles. Fish dishes features prominently on the menu, and the baked hake or the spicy Goan seafood curry are especially good. We held our CAMRA Christmas meal at the pub, an the attendance ran into double figures.

All in all then, a well-deserved winner of West Kent CAMRA Pub of the Year. Do call in if you are in the area; I promise you won’t be disappointed!

I paid a visit last month and was very impressed; this seemed a really good all-rounder with football watchers mixing with diners. My Burning Sky Aurora was superb, as it had been at Cask Pimlico the previous week. Friendly as well.

Pleased to learn you enjoyed your visit, Martin.