Back in the High Weald Again 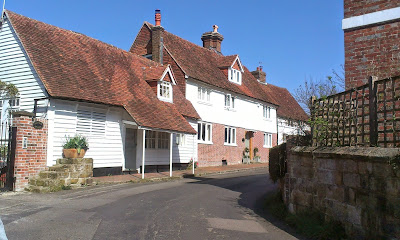 I was reminded of the classic Steve Winwood song, “Back in the High Life Again” on Saturday when a group of fellow West Kent CAMRA members and I made a return visit to the “High Weald” area of Kent. Our visit took place just over a year from one we made back in March 2013, and the contrast in the weather could not have been more dramatic.
Last year the temperatures were hovering just above freezing and there was snow blowing in on a biting north-easterly wind. This year, we had temperatures in the high teens and wall-to-wall sunshine! This combined with good company, good beer, some excellent food, a couple of classic village pubs and some pleasant rolling rural scenery, looking its very best in the warm spring sunshine, and it really was good to be “Back in the High Weald Again”.

A £7 Arriva Explorer Day Ticket allowed us to travel by bus from Tonbridge and, after changing buses in Tunbridge Wells, into the heart of the Kent countryside. Our first stop was the Fountain, in the incredibly photogenic village of Cowden. The pub was closed last year when we made our previous sojourn to the High Weald, as it was under-going renovation work, but I’m pleased to report the Fountain is once again open for business and looking better than ever. 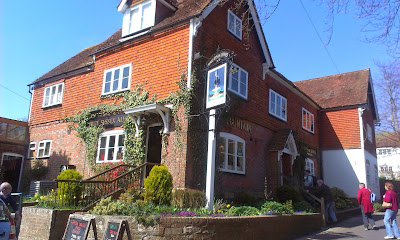 This was only my second visit to the pub; the previous one having been a fleeting one over ten years ago. Now, upon returning, I was impressed with what I saw. Still retaining its traditional public and saloon bar areas, the Fountain has been extended at the rear by the addition of a conservatory. This in turn looks out and leads onto the secluded sun-trap of a garden, and it was to the latter that we de-camped en masse, having first availed ourselves of a pint each of beer.

The Fountain is a Harvey’s tied house and had IPA, Sussex Best and Old Ale on sale. Most of us opted for the latter, with me being especially pleased to see this excellent dark ale on sale. For one reason or another, I have missed it completely this season, so seeing it on the bar was a real bonus, particularly as it is now right at the very end of its long period of availability (October to March). The landlord complemented us on our choice, remarking that Old was a personal favourite of his. He had one more cask remaining in the cellar after this one, and then that would be it until autumn. 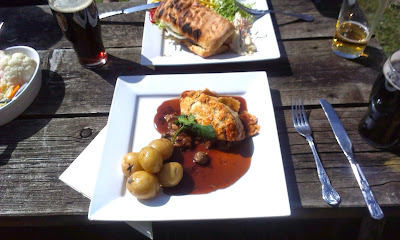 Well the beer was like the answer to a maiden’s prayer, cool, dark and malty, and with just the right hop bitterness to make it the perfect springtime pint. Pure class in a glass, and all the other clichés rolled into one. Sitting out in the garden and enjoying my beer in the company of friends, made me think life doesn’t get much better than this! Well, it did when the food I had ordered arrived. Home-made steak, kidney and mushroom pie, and a proper pie at that! By proper, I mean the meat was completely enclosed in pastry (short-crust no less!), rather than a glorified meat stew in an earthenware dish, topped with a layer of soggy puff-pastry. There was plenty of juicy, succulent meat filling the pie, with just the sufficient gravy to keep things moist. Combine this with new potatoes, and seasonal vegetables and it was heaven on a plate! 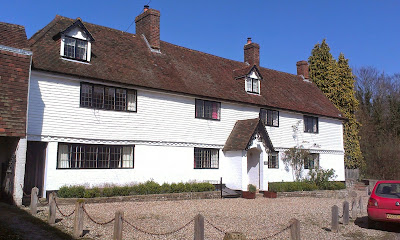 I was reluctant to leave the Fountain, which I have now designated as a destination eatery pub, but we had another pre-arranged port of call. The Kentish Horse, in the tiny village of Mark Beech, was our first stop on last year’s High Weald tour. We had heard the pub had changed hands recently, so were keen to check how it was faring under its new owners. The 234 bus which had bought us to Cowden continues on to Edenbridge, via Mark Beech, but being such a lovely spring day, several of us had come pre-equipped for a walk. The majority of us therefore set off to walk the three or so miles to Mark Beech leaving the less fit/still thirsty minority to spend a further hour in the Fountain, enjoying the excellent beer.

We set off through this picture-postcard village, pausing to reflect that the only people who can now afford to live in such an unspoilt haven are city workers (merchant bankers?), and others on hugely inflated salaries. The net result of this influx of new comers has been a decline in traditional rural life and the loss of village services. One of our party had grand parents who lived in Cowden and was telling us that the village once supported two shops, a garage and a school; all now closed. It also had two pubs. The Fountain is obviously still open, but on our way out of Cowden we passed the village’s other pub, now sadly closed. The attractive, white-painted, tile-hung Crown House still looks like a pub though, with its two entrances, gravel forecourt and clearly visible former pub garden at the side. It must have fetched a pretty penny when it was sold off at auction back in the 1980’s. 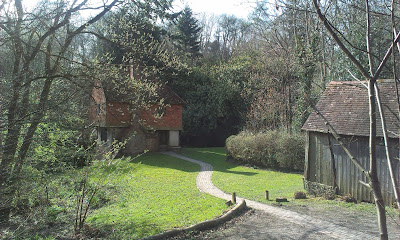 Our walk took us through some very attractive countryside; mainly grassland, with the odd wooded copse here and there for variety. The terrain was quite undulating, and we descended and then climbed again on several occasions before eventually reaching Mark Beech, which is one of the highest points in the High Weald. On the way we passed a really isolated, late Victorian cottage, alone in a clearing in the middle of a wood, looking like something out of a Grimm Brothers’ fairy tale. I have remarked on this place before, having encountered this slightly strange cottage on a previous walk in the High Weald, back in 2009.

We managed to beat the bus passengers to the Kentish Horse, and were sitting in the garden enjoying a well-earned pint when they arrived. I am pleased to report the pub is doing well under its new owners, with a good local crowd huddled around the bar, whilst visitors such as us were outside in the garden enjoying the sunshine and the far reaching views across to the summit of Ashdown Forest. The beer was excellent with Larkins Traditional and Harvey’s Sussex Best on offer. I stuck with the Sussex, having started earlier on the Old Ale.

Our bus arrived just after 4pm to carry us back to Tunbridge Wells. I must confess to dozing off on the homeward journey; the combination of warm temperatures, fresh air and exercise, to say nothing of the beer had a soporific effect on me. A shame really, as I missed some of the terrific scenery, and before I knew it we had arrived at our destination. All in all it was another excellent day out and, as my alternative version of Steve Winwood’s song goes, it certainly was good to be  “Back in the High Weald Again”.