There's Beer in Them Thar Hills! 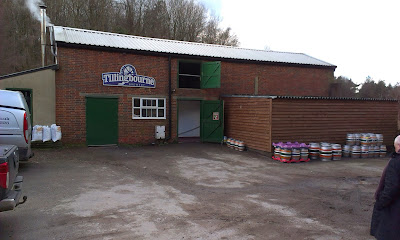 The Surrey Hills Area of Outstanding Natural Beauty is only an hour or so’s drive away from where I live in West Kent and yet, like so many things on one’s own doorstep, it is somewhere I am not at all familiar with. Granted I know a couple of towns which lie in the middle of the area (Dorking and Godalming), but it’s a part of the south-east which I haven’t really spent time getting to know.

My interest in this hitherto (for me) ignored area was re-kindled last Saturday by a coach trip to Tillingbourne Brewery, organised by West Kent CAMRA. The main purpose of our visit was to present Tillingbourne with a certificate which marked their 3.3 % brew, The Source being voted “Beer of the Festival” at last October’s Spa Valley Real Ale and Diesel Gala. The trip was also a way of thanking branch members who gave up their time to man the various bars and generally help out at what was an extremely busy and successful festival.

A party of 22 of us set off to make the relatively short journey to the brewery, which is housed in a converted barn on a farm, high in the hills of the Greensand Ridge, above the village of Shere. Our transport for the day was a comfortable 25-seat mini-coach, belonging to STS Travel of Marden.

We arrived at Tillingbourne at around midday, after our driver had negotiated the narrow and, in places, steep track leading down to the farm. The 1st of March is officially the first day of spring, and the sun was certainly shining as we disembarked from the coach. We were greeted by Lee, one of the two partners in the brewery, who took us inside and gave us a short tour of the plant. 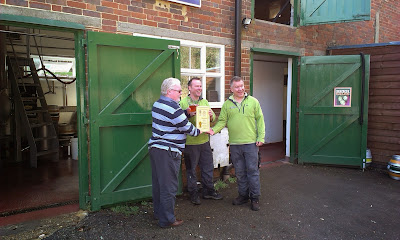 The Brewery has a 17 barrel capacity (68 firkins). The barn it is housed in belongs to Old Scotland Farm, which is part of the Duke of Northumberland's Albury Estate. The brewery takes its name from the short river (just 11 miles long) which starts as a spring on Leith Hill and meanders through the heart of the Surrey Hills towards the River Wey. The brewing equipment was formerly owned by Surrey Hills Brewery, who also had a lease on the farm premises, but when they upped sticks in July 2011 and moved to larger premises just north of Dorking, the Old Scotland Farm set-up was put up for sale, and was acquired by its current owners, Steve Dodd  and Lee Nicholls. Steve looks after the brewing side, whilst Lee handles the sales and marketing. He also makes all the deliveries!
The two were old school friends and once the purchase had been completed in September 2011, the pair started on the major task of cleaning, decorating and upgrading the Brewery. On the 19th November 2011, the first Tillingbourne brew was finally underway, with their first regular beer, the 4.2% Falls Gold, proving a winner right from the word go.

It was a refreshing glass of Falls Gold that we were offered, as we looked over the brewing plant. Steve was in the process of watching the copper come to the boil, having previously pumped over the sparged wort from the mash-tun. Tillingbourne relies on steam to heat it brewing vessels, and Lee explained that steam gives a much more even, and less fierce heat than that obtained from electric heating elements, or a direct fired gas burner beneath the copper.

I have to say, the Falls Gold was absolutely superb; well-conditioned, crystal clear and burnished gold in colour, with a thirst quenching hoppy bite, it really hit the spot after our journey over, and I had no hesitation in accepting a refill when it was offered. After our tour, we moved out to the yard to enjoy our ale in the sunshine, and chat to Lee whilst Steve got on with the brewing. We sampled two other beers that lunchtime; the darker Bouncing Bomb, named in honour of inventor Sir Barnes Wallis who lived nearby, and then to finish up on, the 4.8% Hop Troll, which is a mega-hopped India Pale Ale. Lee told us all sorts of statistics regarding the number of outlets supplies, amounts brewed etc, but I wasn’t paying enough attention to recall exactly what he said. What I do remember though, is with just the two of them involved, and Steve working on a part-time basis at present (he still has a regular day job), they are trying to keep distribution as local as possible. They do have plans though to extend the barn, to house some additional fermenters, which should keep the pressure off and allow for some controlled expansion.

We left the brewery just after 2pm, but not before our branch chairman Iain had presented Steve and Lee with their well-deserved certificate. Ironically I still haven’t tasted The Source, as the cask ran out on the first night of our festival and there was none left in stock at the brewery. Before descending towards the A246 on our return journey, we were rewarded with a spectacular view right across the Surrey countryside, towards London. We could see the tower blocks of the city sparkling in the sunshine on the distant horizon, and could even see the arch of Wembley stadium! 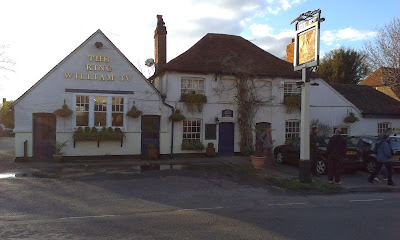 We stopped for a late, but pre-booked lunch at the King William IV at West Horsley. This rather upmarket pub is a former stomping ground of our chairman, and it proved a good place to stop for some more solid refreshment as well. We were ushered into the dining room at the rear of the pub, and sat down at two long tables, but not before partaking of some beer. Surrey Hills Shere Drop was my choice, although several others gave the Courage Directors a try. The beer went well with my steak and kidney pudding, so much so that I grabbed a further pint before we left.

There was one further stop before arriving back in Tonbridge; namely the Carpenters Arms at Limpsfield Chart. This large village pub is one of two outlets belonging to the nearby Westerham Brewery, and not surprisingly there were five Westerham beers on tap. I opted for the Hop Rocket IPA, which as its name suggests is a well-hopped,  mid-gravity IPA.

We only stayed for the one, as our driver was keen to get back, and several members also had evening engagements to attend. It was an excellent day out, with good beer, good pubs and the chance to appreciate some stunning scenery in a part of the country many of us don’t often get the chance to visit.