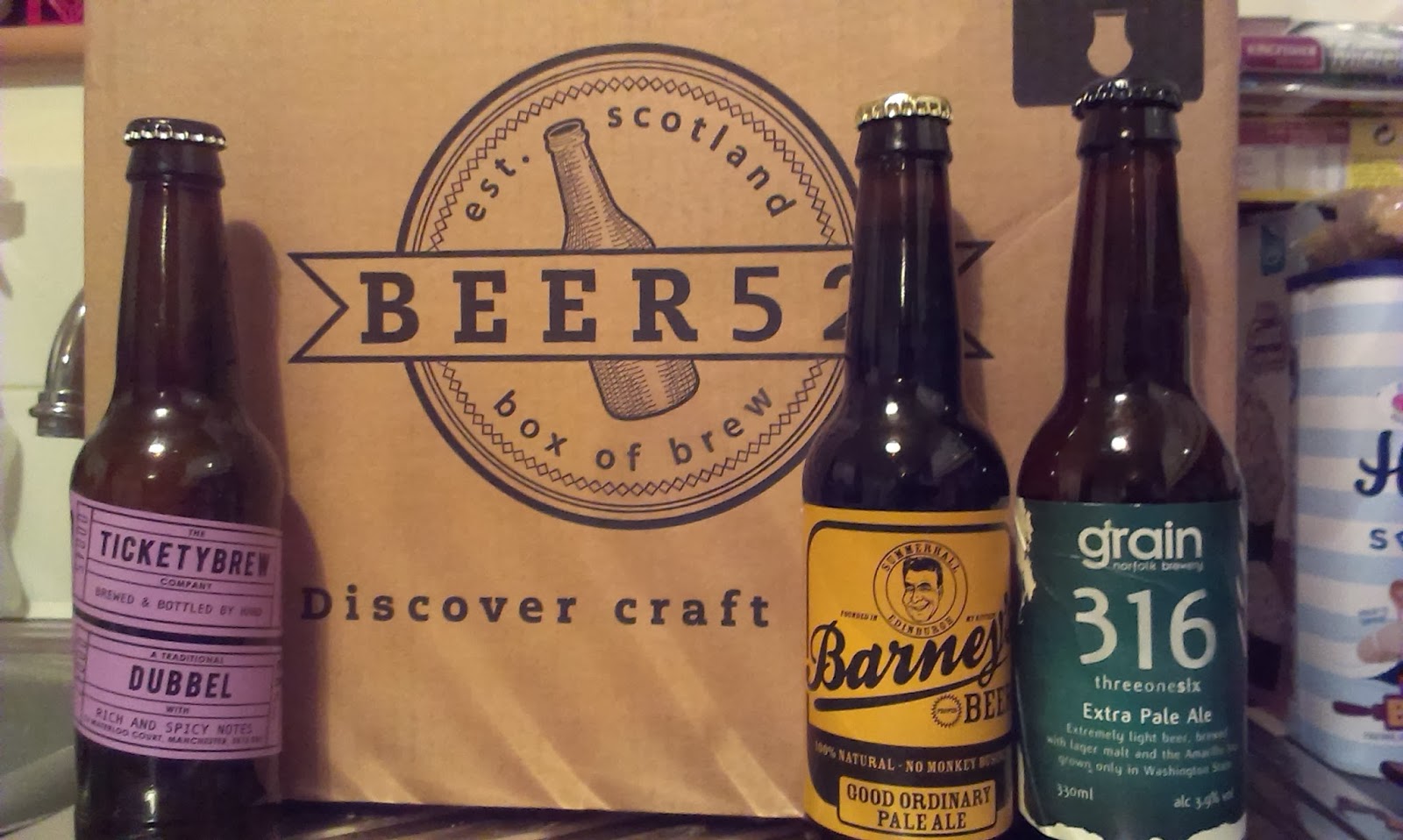 It’s not often that I get sent free stuff, but when I do it’s always gratefully received. Several years ago I received a mixed case of beers from Woodforde's for me to review, and just recently I received a mixed case of “craft beers” from the good folks at BEER52. The latter are a newly established beer agency  who are based in Scotland. Each month they offer a case of eight different  hand-picked craft doors, which  they will deliver to your door. The beers work out at around £3.00 a bottle, and each case is accompanied by detailed, and well laid-out, tasting notes. There is no delivery charge. 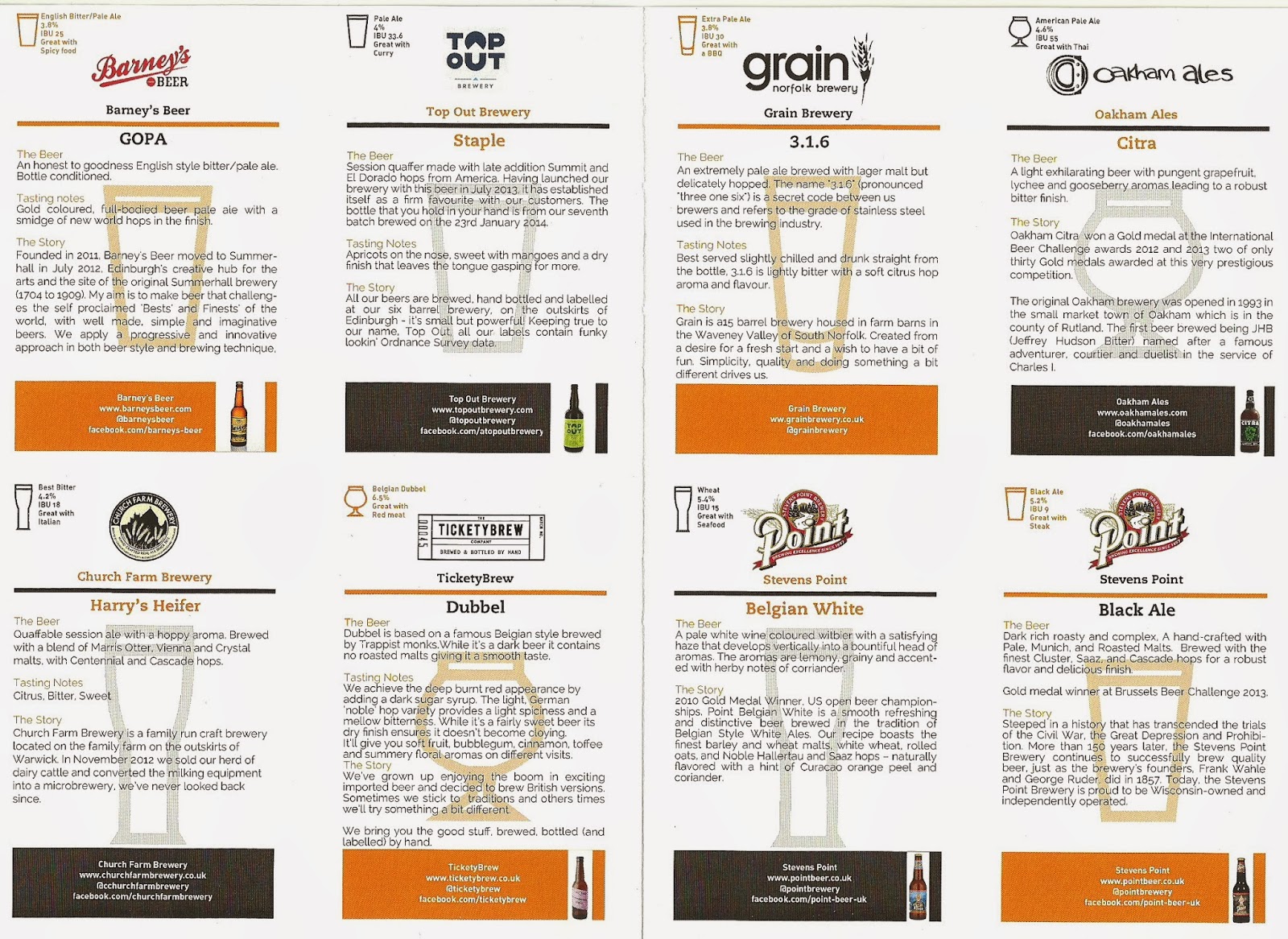 In exchange for these beers I offered to review them on behalf of BEER52, and like other bloggers in similar situations, I wish to record that my thoughts, opinions and comments on the beers will be as honest and objective as possible, and will not be influenced by the fact I received these items foc.


There are eight beers in total, six of which are from breweries I have never heard of. The two breweries I am familiar with are Grain and Oakham; both of which are quite well known, having been established for some time now. Anyway, here’s the beers listed in the order I drank them, together with what I thought of them:


Oakham Ales Citra 4.6% - Pale gold in colour and topped with a thick foamy head, this classic new wave beer has a stunning citrus-like, grapefruit aroma, from the renowned Citra hop. Oakham claim they were the first UK brewery to use Citra, back in 2009, and such were its unique qualities it quickly became a permanent fixture. The brewery also claims lychee and gooseberry aromas in the beer, and they are certainly correct about the dry bitter finish. A really good and very drinkable, all round beer.

Church Farm Brewery Harry’s Heifer 4.2% - A pale amber best bitter. Poured without a head, but still with a reasonable amount of condition. A slight floral nose, but not much else in the way of aroma. Quite sweet tasting, with some citrus flavours present in the background. Not a huge amount of bitterness, (certainly not a hop monster!), but still a pleasant and refreshing drink. Half-way through the bottle now, and I’m of the opinion the beer is too sweet, and too floral for my taste. Perhaps more suited to a summer afternoon, than a damp, cold, evening in mid-February.


Top Out Brewery Staple Pale Ale 4.0% – Pale amber in colour, this bottle-conditioned beer pours well giving an inviting head of loose white foam. With a lovely zesty aroma from the American hops, the citrus theme extends through into the taste, enhanced by a touch of wheat in the grist. Top Out are based on the outskirts of Edinburgh, and have only been brewing since July 2013. If they can keep coming out with brews like this then they are on to a winner!


Grain 316 Extra Pale Ale 3.9% - I visited Grain Brewery’s central Norwich pub, the Plough, last April, whilst in the city for the CAMRA National AGM. Being fairly late on a Saturday night the place was heaving, but heaving in a good way with mainly young people, all enjoying the extensive range of Grain beers on sale in the pub. The bar maids were young and attractive too and, more importantly, they were very knowledgeable about the beers as well!.


What I am trying to say is that Grain seem a young and go-ahead brewery, and this is reflected in this bottled beer. Brewed using lager malt, which gives an extremely pale colour to the beer, 316 has a delicate malt body with a pronounced citrus hop aroma and flavour. The tasting notes from the brewery suggest necking it straight from the bottle, but to me that would be sacrilege, as it would with any bottled beer. Perhaps I’m not so young and go-ahead after all?


Stevens Point Brewery Belgian White 5.4% - A confession, I’ve never been much of a fan of what beers, so how did I fare with this craft wheat beer from Wisconsin? Surprisingly well, the beer poured pale with a colour approaching that of white wine. There was surprisingly little of the fruity, bubble-gum ester flavours associated with Bavarian Weiss Biers; instead there was a pleasant graininess, with a hint of coriander.

It is interesting to see from the tasting notes that as well as wheat, the beer contains rolled oats and is flavoured with a touch of Curacao orange peel and coriander, alongside the Hallertau and Saaz hops.


Stevens Point Brewery Black Ale 5.2% - Like its name suggests, jet black in colour. Poured completely flat, with no head present at all. A smooth tasting dark beer, with plenty of roast and caramel notes Bittered with choice Cluster, Saaz and Cascade hops for a smooth, bitter finish.I’m not really certain which style“black ale” fits into, although stout might be the most appropriate.


The Tickety Brew Company Dubbel 6.5% - Black in colour with just a hint of red when held to the light. Inspired by the famous Belgian Abbey/Trappist style the tasting notes state that the beer contains no roasted malts. Instead the “deep burnt red appearance” is achieved by adding dark sugar syrup. There is certainly a background taste from this syrup which reminds me of molasses; something I am not a huge fan of. However, this taste is not over-powering and the overall impression is that of a sweet beer, with a touch of spice and gentle bitterness. Definitely a beer which grows on you and a good take on a Belgian classic by an up and coming British brewery.


Summerhall Brewery Barney’s Beer 3.8% - This bottle-conditioned beer describes itself as a “Good Ordinary Pale Ale”, so does it live up to expectations? Well it pours nice and clear, is amber in colour and has a thick, but fairly loose head. There’s some hop, citrus and peppery notes in the aroma, but to me the beer is a little thin, but although it lacks somewhat in body, the hoppiness compensates with its thirst quenching properties.


Like the Church Farm Brewery beer, this pale ale is far more suited to a warm summer’s day, than a damp, cold, evening in late February. It would be interesting to see what some of the brewery’s other beers are like.


If you fancy trying some of these beers yourself, then why not place a trial order from BEER52?  The company are kindly offering a £10 per case discount to readers of this blog. To qualify for this, all you need do is type in Coupon: BAILEYS10 when placing your order. Happy drinking!


Footnote: this post originally attracted a small number of negative comments relating to the service provided by Beer52.com and, more importantly, to difficulties experienced by some people when attempting to cancel their subscriptions.

Following assurances received from Beer52.com’s founder, James Brown and his team, that the situation has now been improved, and that issues associated with cancellation have been resolved, I have decided to take down the comments.

This is not a decision I have taken lightly, but having run my own business in the past I know how hard it is getting everything right, especially first time around. As Beer52.com have introduced “super easy online cancellation”, I have given them the benefit of the doubt.

Final point; there has been no financial inducement, or “goods in kind” received on my part, as a result of this action, and I remain, as always, an impartial observer.

I am currently trying to cancel my subscription to Beer 52 but with no joy. So, I fear that nothing has changed - despite assurances from the company's owner.

Well its not over a year after the previous comment and guess what. Its still a nightmare to cancel. By Nightmare I mean not possible.

Nothing Changed at all. I would strongly advise any recommendation for this company.

Just posting to second this, beer52 does nice beer boxes but the difficulty in cancelling definitely cancels that out!
Do not recommend!!!

Every year a new post, every year they don't allow online cancellation. Avoid.