How to Taste Beer

Here, as promised, is the follow-up to last week’s post about the “tutored beer tasting” organised by West Kent CAMRA, at the Crown Inn in Groombridge.

So what exactly takes place at a “tutored beer tasting”? Well, the first and most surprising thing is not a lot of beer gets drunk. More on this later, but those of us who attended last Saturday’s session, at the Crown in Groombridge, were more than a little surprised by this. 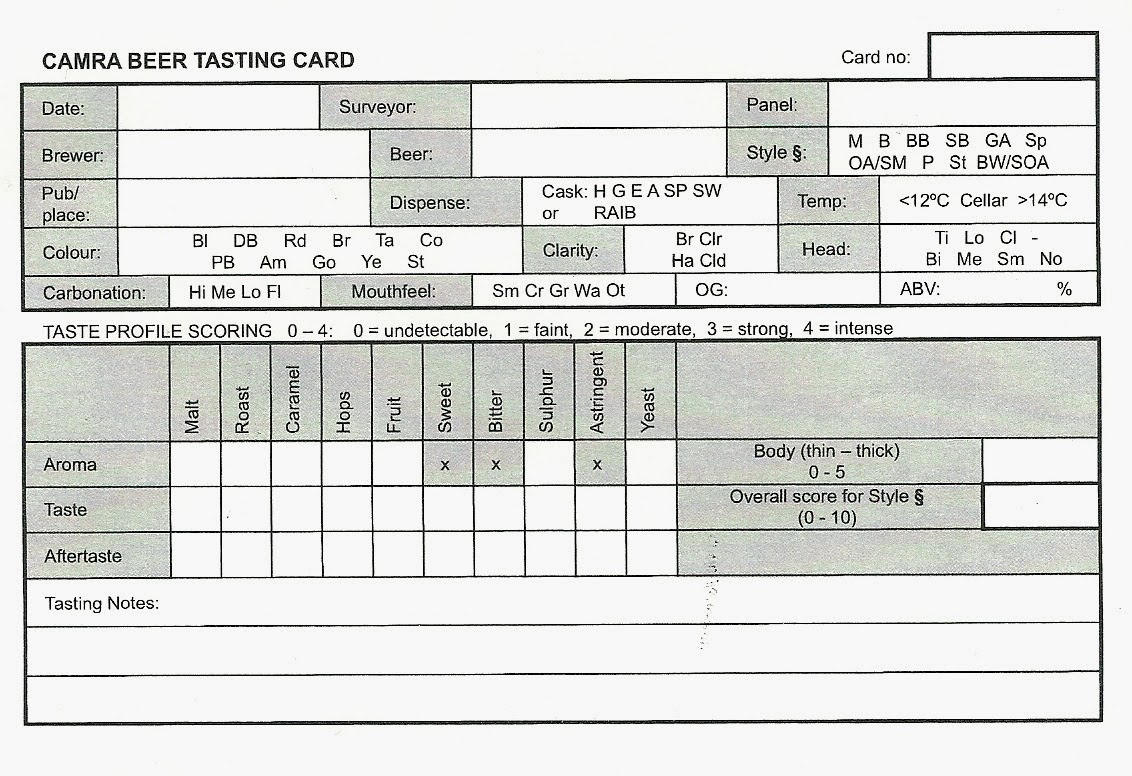 On entering a pub, the normal behaviour is to quickly scan along the bar to establish what beers are on offer, and then to order a pint of whichever one takes your fancy. Most of us were about to do this last Saturday, when we were stopped in our tracks by branch chairman, Iain, and told if we bought a pint first, we would not be able to take part in the tasting. All a little harsh, you might think, but the reason is tasting needs to be conducted with a fresh palate, so not only were we deprived of beer to start with, we were also not allowed to eat until after the session had ended.

The pub knew we were coming, and had reserved their snug bar area for us. What Iain did next was to order a couple of four pint jugs of the first beer to be tasted (Black Cat Original), along with 12 pint glasses. He also ordered a couple of jugs of water, for palate cleansing purposes, and produced a packet of cream crackers, for the same end (so much for not eating!). After we were all seated, Iain talked us through the whole tasting procedure, whilst we sat there looking longingly at the jugs of beer, like parched travellers in the desert!

There are three parts to properly tasting a glass of beer: appearance, aroma and taste. There are also sub-categories and steps to each of these processes, and a whole host of different things to look for. CAMRA has usefully produced guideline cards on which the various stages are outlined, along with which criteria to look for, and how to score each one. Individual results are then recorded on the cards, and the overall results pooled at the end of the session. An example of this card is shown above.

First the beer style which the beer to be tasted falls into is selected. There are 10 styles in total, ranging from mild to barley wine/strong ale, with a host of others in between. The O.G. and abv of the beer in question is also noted and then, after the beer has been dispensed, the tasting can begin. I mentioned pint glasses earlier, but we were only given an approximate half pint each of beer. The reason for this is the beer needs to be swirled around the glass to release some of the aromas, and this would not be possible with a full glass.

Aroma is next on the list, and to release the various aromas, the glass containing the beer is swirled and then sniffed. The following aromas are looked for: malt, roast, caramel, hops, fruit, sulphur and yeast. Obviously roast and caramel aromas will be more prevalent in darker beers, whilst fruit and hops are more indicative of bitters and pale ales.

Now comes the part everyone will have been waiting for, namely you actually get to taste the beer. Take a mouthful and allow it to swirl around your mouth and over your tongue. Then swallow; no poncy spitting here! Note the taste whilst drinking and record accordingly: malt, roast, caramel, hops, fruit, sweet, bitter, sulphur, astringent and yeast. Twenty seconds or so after swallowing, note the aftertaste, using the same criteria as for taste.

Whilst tasting, Mouthfeel (smooth, creamy, grainy, watery or other) and Carbonation (high, medium, low or flat) should also be determined; although the latter can also be partly ascertained whilst swirling the beer around the glass, prior to the aroma stage.

Finally the Body of the beer is scored on a scale of 0-5, with 0 being thin and 5 being thick, followed by the Overall score for the style (0-10), based on one’s impressions of the beer during the tasting. And that in a nutshell is it!

We tasted the two Black Cat Brewery beers on sale in the pub; the Original (a 3.8% Best Bitter) followed by the Black Cat (a 4.9% Old Ale). Obviously as with any beer tasting, the weakest one is tasted first, but both were first class brews which were served in peak condition.

Afterwards we got down to some serious supping of the two beers, and got some food  inside us as well. All those who attended found the session very interesting and extremely useful, and there are now a dozen or so of us who can say we are trained CAMRA beer tasters, which means we can officially taste other local beers  in order to provide tasting notes for the Good Beer Guide. Our thanks to the Crown at Groombridge for hosting the event, and to our branch chairman, Iain for guiding us through it.
Posted by Paul Bailey at 20:14

I have to say some CAMRA members when assessing beer on pub crawls can be spectacularly subjective and perverse - maybe more formal training would come in handy.

It's important to distinguish how well a beer is kept from whether you like that particular beer.

As Richard Boston said on the subject, "Raise glass to mouth, part lips and swallow."

Curmudgeon - "It's important to distinguish how well a beer is kept from whether you like that particular beer." Agreed, and that was a point emphasised during the session. Whether one likes a beer or not is, to a certain extent, dependent on the overall balance and combination of the different tastes, but the best tasting beer in the world will suffer if it's not looked after properly.

Matt - "Raise glass to mouth, part lips and swallow." Exactly what most of us did as soon as the formal tasting session was over!