Getting in the Christmas Spirit

We don’t do Christmas Ales properly in this country. I was prompted to write this post, after reading similar sentiments on the “One More Won’t Kill You – Beer Blog”. It really is the case that with one or two notable exceptions, we just can’t turn out anything decent for the festive season.


I have posted on this subject on at least two previous occasions, and I have to say that over the years my feelings on this matter haven’t improved; in fact if anything they’ve got worse! I haven’t seen this year’s selection from JDW yet, and have been unable to find it online either, but normally it acts as a good yardstick to the type of Christmas Ales the breweries are putting out. 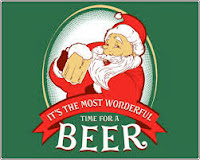 More often than not many Christmas Ales turn out to be bog standard, uninspiring, malt-led, brownish bitters in the 4.0 – 5.0% strength bracket, with a daft Christmas sounding name. Name wise, there have been some awful puns in previous years, check out the Pump Clip Parade website for details of some of the worse ones, but I can also recall some pale beers in the past, masquerading under the Christmas banner. 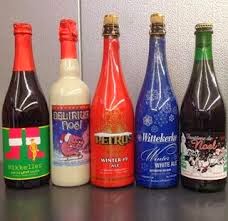 So what do I look for in a Christmas beer? Well, a decent strength to start with; ideally something around 6.0% and certainly nothing below 5.0%! I also like my Christmas ale to be dark in colour (preferably darker than ruby), full-bodied and well-hopped. Other countries manage to deliver on this front, in particular Belgium with many breweries putting out seasonal stunners, whilst over in Bavaria many brewers produce strong, seasonal Weihnachtsbier, named after "Weihnachten" the German word for Christmas. These normally run in at anywhere between 6 and 8% abv, not quite as strong as the Belgian offerings, many of which get into double figures, but they are all good, full-bodied beers designed to keep out the cold.
Perhaps that’s the problem here in the UK, as we don’t get really cold winters, or if we do then the cold snap normally doesn’t last that long. Consequently, few beers come near the sorts of strengths common on the Continent, although Harvey’s Christmas Ale hits the spot for me at 7.5%. (It used to be 8.1%, but the brewery reduced its strength to bring it in just under the, high strength bracket, recently introduced as a knee-jerk reaction in response to super-strength lagers such as Carlsberg Special Brew, or Tennents Super.)

Harvey’s Christmas Ale was on sale at the Windmill last Sunday, and I enjoyed a glass of it at the end of my Christmas meal. It’s a perfectly balanced strong dark bitter-sweet ale, satisfying and warming, but obviously a beer to be treated with respect but, as I alluded to earlier, it’s rare to find a beer this strong in Britain, especially on draught.

I will of course be keeping an eye out to see what Wetherspoons come up with, but I’m not going to hold my breath. So far as my own selection of beers for Christmas is concerned, at the moment I haven’t actually got anything with the word “Christmas” in the name, but I have got quite a few strong bottles tucked away. Most are Belgian, including a whole case of St Bernardus Abt 12 (10%), but I’ve also got one or two surprises from the UK, including a bottle of Sharps Quadrapel (10%), left over from last Christmas and the Ampleforth Abbey Dubbel I mentioned in a previous post.

There is still time of course, for me to acquire the odd bottle or three of genuine Christmas ales, so if anyone would care to recommend some of the more readily available brands, then please let me know.
Posted by Paul Bailey at 22:40

I agree with you regarding Harveys. The exception that proves the rule. I was working behind the bar at Essen Kerstbier festival over the weekend serving those Belgian Xmas beers in your photo.

The Sharps Quadrupel is excellent, and dare I say Old Dairy's Snow Top fits your bill.

Oh the whole, though, I agree, not enough proper seasonal beers available from UK brewers. Another boring brown job with a crappy pun name just doesn't cut it.

Birkonian - the Kerstbier Festival sounds excellent, and the photo's I have seen on various websites confirm this. I will make every effort to go there next year, especially as I am becoming rather disillusioned with many UK beer festivals.

Ed - thanks for the tip. I had thought about Old Dairy Snow Top, having enjoyed it last year. I noticed that Odd Bins in Tunbridge Wells are stocking your beers, and I've bought Old Dairy bottles before in Noble Wines. A trip over to the Wells, this coming weekend is therefore in order.

ChrisM - the O'Hanlons Brewer's Reserve sounds really good. Do they sell it in bottles? I have always enjoyed O'Hanlons beers, but we never see them in this part of the country any more.

Ed - good news for Old Dairy, but not so good for me. Called in at Tunbridge Wells Odd Bins Friday evening, on my way to the CAMRA social. They'd had a delivery of Snow Top earlier in the week, (it may even have been that same day), but it had all sold out!

They did have Blue, Red, Copper and Milk Top though, as compensation.