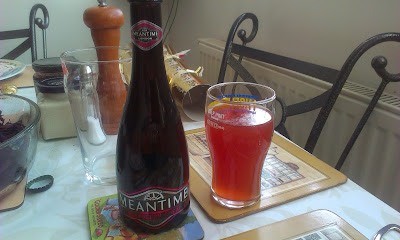 I went for quality this Christmas rather than quantity; a conscious decision prompted by stocking up a month or two in advance with a variety of different bottles, as opposed to picking up a polypin from one of our many local breweries. My Christmas stash has been added to with various Christmas gifts from friends and family, (how well people seem to know me), so there’s no danger of running out of beer until well into the New Year.

Christmas Eve was quite subdued with just the one Pilsner Urquell, followed by a bottle of London Porter from Fullers. I didn’t start on the beer until fairly late in the day, as I was half expecting to have to drive to Sevenoaks to collect No. 1 son from work. Like the rest of the South East we’ve had some appalling weather in the run up to Christmas with storm force winds and torrential rain in the early hours of Christmas Eve morning. Fortunately there were no tiles missing off the roof the next morning and the fence panels all seemed intact as well, but I still ended up having to drive Matthew over to Sevenoaks as there were no trains running (a landslip, I believe). 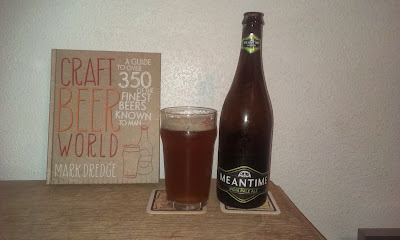 Weaving my way around a number of fallen trees, I deposited him close to his workplace in Sevenoaks and then set off to drive into work myself. The roads were barely passable in places, with several inches of water running off across the carriage-way from the adjacent fields. In nearly eight years of working out at Chiddingstone Causeway I have never witnessed such bad conditions on the roads, or so much water!

Fortunately we finished at midday, so giving the offer of drinks at the local pub a miss, I set off for home. Luckily some of the waters had subsided, but driving conditions were still quite tricky and I was glad to reach home in one piece. It was then I received a phone call from my wife who had gone down to our local Sainsbury’s for some last minute shopping, only to find the waters starting to rise and flood the car park. I drove down and found her cursing at having ruined a pair of boots, but apart from that there was no real harm done. 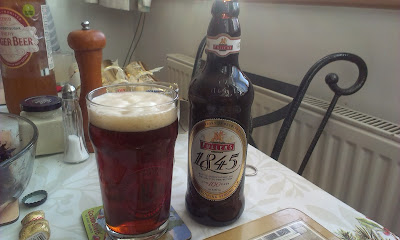 Which is more than I can say for central Tonbridge, as throughout the afternoon and evening of Christmas Eve the waters in the Medway kept rising until the river burst its banks. Quite a few shops and businesses were flooded, including the Humphrey Bean, our local Wetherspoons. It could have been a lot worse, had it not been for the Flood Barrier an extensive earth embankment and set of sluice gates, downstream at Leigh, which is designed to hold back thousands of gallons of floodwater and then release it at a controlled rate. We live on a hill, so were unaffected, but my heart goes out to all those poor souls whose Christmas was ruined by the worst storm in over a decade.

The above events meant a fairly subdued Christmas Eve, but none of us minded as we were all quite tired, and  glad of the opportunity to take it easy and put our feet up. Christmas day was different of course, but even so it wasn’t until sitting down to Christmas dinner, just after 2pm, that I cracked open my first beer. Meantime Raspberry Wheat Beer, 5.0%, did what it said on the bottle and acted as the perfect aperitif, the slight tartness from the raspberries, and the wheat, serving to stimulate the palate, if that all doesn’t sound too pretentious.

Fuller’s 1845 was the perfect accompaniment to our roast turkey dinner, the combination of full-bodied malt and peppery, earthy hops complimented the meat and vegetables perfectly, as this 6.3% abv beer has done in previous years. When you know something works as well as this, why change it?  There may well be beers which will equally compliment the Christmas pudding, mince pies and brandy sauce that followed, but if there are I am not aware of them. Some decent coffee did the trick instead, and that was it for a while as we decided to leave the cheese and biscuits until later. 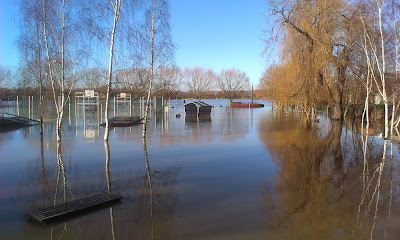 I wanted a palate cleanser after that little lot, and whilst a Pilsner Urquell would have fitted the bill, I wanted to keep a bottle or two back of this beer. Instead I opted for Brakspear’s Bitter 3.4%.  I can’t think of another beer which packs in so much flavour at such a modest strength. The beer formed the perfect late afternoon pick-me-up, after a large Christmas dinner and a surfeit of Christmas pudding and mince pies.

When we eventually felt like tackling the cheeses, much later in the evening, I again found the perfect beer to go with them in the form of Sharp’s Quadrapel Ale 10%.  This bottle from the brewery’s “Connoisseurs Choice” range was a 2011 vintage, being left over from last year’s Christmas stash. The extended maturation hadn’t harmed the beer, and it poured clear and well-conditioned, with a deep ruby colour, an alcoholic fruity aroma and a full, rich bitter-sweet taste. It was definitely a beer to savour, and it went really well with some strong, well-matured cheddar, plus a bit of Stilton. Full marks to head brewer, Stuart Howe for coming up with this one.

Boxing Day dawned clear and bright, so after breakfast I decided to don my coat and hat and head down into Tonbridge to see how the town had coped with the effects of the flooding. After a day and a half indoors, it was nice to get out in the fresh air. It was doubly nice to see the sun and to feel its welcoming warmth which, even at this time of year, was still discernible. The town hadn’t fared as badly as I thought, although certain car parks were still under water, and there were plenty of people about. Like me, I suspect they were taking the opportunity of walking off a little of the previous day’s excesses and just generally blowing a few cobwebs away.

Later in the day, around mid-afternoon, we sat down to some cold meats (turkey and ham), bubble and squeak plus a selection of pickles. I wasn’t quite sure which beer to choose to go with the food, so I plumped again for a bottle of 1845. Like on the previous day, this proved to be a wise choice; the strength and body of the beer standing up well against some extremely hot pickled onions and some pretty strong piccalilli.

I only had one further beer on Boxing Day, but it was large one and a strong one too. Meantime India Pale Ale 7.4% in a 750ml champagne-style bottle was just right for an evening’s leisurely drinking, being full-bodied with lots of chewy malt, expertly balanced with oodles of Fuggles and Golding hops. A tremendous beer which, despite its high strength, doesn’t taste at all cloying or too sweet.

So that’s the first three days of Christmas over, but I don’t return to work until the 2nd January, which means that, including today, there are still six more days to go. I do need to get out of the house though, apart from just going shopping (like we did today); otherwise I’ll end up suffering from “cabin fever”! I did have some plans for the garden, but in view of the weather, and the absolutely saturated nature of the ground, they will have to be put on hold. The extreme damp conditions underfoot also rule out a walk to a nice country pub, although a trip by bus could be on the cards. It would be good to check up on some of our local pubs to find out what sort of Christmas they’ve been having, and what, if any, interesting beers they’ve got on.

Whatever the weather though, may I take this opportunity of saying that I hope everyone reading this has had a good Christmas, and to wish people all the best for the coming year.