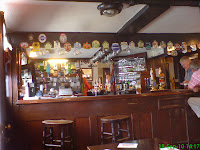 On more than one occasion in the past I’ve complained about just how “conservative” many pub landlords are when it comes to choosing which beers to stock. I’m often amazed whilst visiting pubs up and down the country at just what a narrow range of beers many of them stock, with tried and trusted, well-known brands more often than not the order of the day. 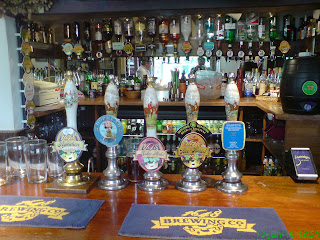 This uniformity, and lack of choice, has been a particular bug-bear of mine for some time, but just recently I’ve started to wonder whether the blame for this curse of “sameness” is as much, if not more, the fault of the nation’s drinkers, rather than hard-pressed licensees. The thing which really got me wondering about this was my experience in Norfolk, last weekend, where I found the guest ale in the pub I was visiting to be past its best, whilst the regular (and well-known) local beers were in excellent nick.

This is not the first time I have experienced such a thing, and I have to say that if in a well-run, and often Good Beer Guide-listed pub the better known, familiar brands are all in first class condition, whilst the unusual “guest ale” is not, then the fault lies more with the pub’s drinkers, who are reluctant to try something a little different, than it does with the unfortunate landlord. I say unfortunate, because in this kind of situation we have someone who is clearly trying his or her best to provide something a bit different for the customers, and they are just turning their noses up at it, sometimes literally!

This point was brought home to me back in the summer, when a well-known local pub, (I won’t say which one), was holding one of several beer festivals it puts on throughout the year. This particular festival had a London theme, with all the beers coming from the new wave of independent breweries which have sprung up in the capital during the last few years. Despite an average of eight different and, it must be said, very good beers on sale at any one time, a significant number of the pub’s regulars were unhappy that their favourite tipple (Harvey’s Sussex Best), had been taken off to make way for the festival beers. In order to placate them, one member of the bar staff was making trips down to the cellar to draw off pints of Harvey’s for them, direct from the cask!

Of course it could be argued that the sensible thing here would be to have had the Harvey’s on alongside the festival beers, thereby keeping both the stick-in-the-mud locals, and the more adventurous festival goers happy. However, it seems that a substantial number of people are either afraid to try something a little different, or are so stuck in their comfort zones that any attempts by pub landlords to tempt them with something new are doomed to failure. Small wonder then that many publicans don’t bother trying at all or, having tried a couple of times, give up and stick with the likes of Bombardier, Doom Bar, Old Speckled Hen et al.

Although we all know pubs where this situation does not apply, they tend to be places which major on offering a wide and varied selection of different beers, as well as other drinks such as ciders and perry. Your average back street local, or your traditional village pub, is still likely to stick with “safe” brands, rather than something a little more adventurous, purely so as not to offend, or even alienate, the regulars. Most pubs do not have the luxury (if that’s the right word?) of having significant numbers of beer geeks or CAMRA members amongst their regular clientele to be able to stick their necks out, for a long enough period, to make these changes, wean the customers off their regular beer and cajole them into trying something different.

The daft thing is though that given a little encouragement, coupled with a bit of subtle education, people can quite often be persuaded to step out of their comfort zone and try something new, whether it’s the latest offering from the micro-brewery down the road, or a beer from the new craft brewery in the next town. Unfortunately, whilst this is happening in some of our major towns and cities, it is not occurring elsewhere and the end result is more of the same, “safe” boring beers. This in turn leads to less outlets being available to stock the new and exciting beers, thereby restricting their access to the market place.

So are heading towards a two-tier system in Britain, where trendy craft-beer bars and “exhibition-type” real ale pubs cater for beer geeks and the ticking fraternity, whilst the remainder of the nation’s rapidly dwindling pub-stock cater for people who just want a place they can go to socialise, and where the drink on sale is secondary, and in some cases almost immaterial? OR should there be some attempt to bring these diametrically opposed groups (and drinking establishments) together?

It can be done through things like education, increased travel, (both at home and abroad), but it may prove a lengthy process. To a certain extent the process is already occurring (witness the vastly increased range of beers available at your local supermarket, and contrast it to the situation 10-20 years ago, and you will see what I mean). However, if we travel too far along this road we risk the same sort of homogenisation I was referring to earlier, and what I was trying to avoid. Many people though are happy as they are (and there’s nothing wrong with that, of course!), and are content to carry on drinking their favourite, often boring beers, whether they be Doom Bar or Fosters. After all, diversity and variety is what makes the appreciation and enjoyment of beer the experience it is today.

A couple of final thoughts on the subject; there have been suggestions recently that CAMRA’s Good Beer Guide has morphed into something of a “guest beer guide”. This has come about because local branches, keen to demonstrate the diversity of different beers within their particular branch areas will, all things being equal, tend to select pubs which offer a greater choice of ales over those that just offer a single boring “brown” beer. Forty years ago, when the guide was first published, real ale was hard to find and pubs which sold any cask beer at all, irrespective of quality, were likely to be included. I certainly believe the GBG no longer fulfils its original purpose, and has long outlived its usefulness.

Last, whilst I obviously appreciate the availability of a good variety of beer in a pub; given the right occasion, the right people, the right pub and the right set of circumstances, an excellent time can be had in a place which just offers a “safe” beer, but obviously the whole experience would be even better if the beer selection was that little bit more exciting.

I don't think you can really blame drinkers for preferring to stick to the tried and trusted. After all, lager, stout and smooth drinkers do, so why shouldn't cask drinkers too?

The novelty of guest beers has worn off, and a lot of drinkers understandably prefer something they know will be OK to an endless lucky dip. So I think you're right to say that a two-tier beer market will develop.

There's also the "vicious circle" factor. I regularly go in my local Holts pub, which also offers guest beers. But I never try them, because I fear I will get the first one out of the pump that day.

On the other hand, some of the more long-lasting micro breweries have succeeded by getting their beer accepted as the regular cooking bitter in local pubs - Dunham Massey near me being a good example.

I know what you mean, Curmudgeon, and I too am often wary about trying the guest ale in an unfamiliar pub. There's nothing worse than the first pint out of the pump, especially when it's been sitting in the lines since the night before!

Take up of the guest beer is not helped by a particular bugbear of mine. Pumpclips which put quirky eye-catching graphics and daft names above any idea of what style the beer might be. I used to be a beer tourist, scanning the bar for something new, choosing for preference the guest beer(s), but too many years of disappointment mean I now look for something I know I'll enjoy, even if this is a Guinness when the only cask choice is Doom Bar.

Mark, I am also sometimes a bit wary of totally unfamiliar beers. (Fear of the unknown?). Asking the bar staff will sometimes shed light as to what the beer is, style-wise, but more often than not will elicit the response "I dunno!"

In these situations a half is probably the best bet, and one can sometimes be pleasantly surprised. If not, then as long as the beer is not unspeakably foul, nothing too much has been wasted.

I do agree though that some indication of style would be useful. Our local JDW in Tonbridge, has some small, sealed glass jars which contain a sample of each guest ale. These are kept adjacent to the relevant handpull. These at least show the colour of each particular beer.