A Pint Amongst Friends 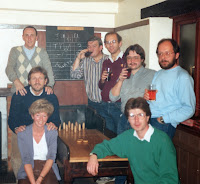 In what will be the final part of this series of four posts, I want to pull together the separate strands of the previous three postings and come up with what to me is THE most important thing about the enjoyment of beer. Several respondents have already come close to mentioning it, and I myself have also hinted at it in my previous ramblings.

Basically what it all boils down to is, it doesn’t matter how good the beer is, if the setting/context/company/lack of company/ general ambience, or combination of any, or all of these factors isn’t right, then one’s enjoyment of the beer will not be as good as it would be if this were not the case. I could even throw in a few other factors, such as the beer not being served in the correct, or appropriate glass; the beer being served at the wrong temperature, or not poured correctly; the glass being dirty, in fact there is a host of different things which could ultimately spoil ones drinking experience.

If all this sounds a bit too OCD, then please accept my apologies. Given a first class beer, in tip-top condition, I wouldn’t let any individual one of these factors totally ruin my enjoyment of the beer, but when several combine at the same time, then it becomes a different story.

Many years ago, I was in a pub with a group of friends and as friends do, particularly when the beer is flowing freely, we were discussing a number of what at the time seemed quite deeply meaningful issues. One member of the group asked the question, “What, in your opinion, is the most satisfying and enjoyable experience in the world?”  He went round the table, and we all answered in turn. I don’t remember many of the answers, and I believe my own was rather facile, but one reply stuck in my mind. It seemed too simple a thing at the time, but the more I thought about it, not just immediately afterwards, but on and off over the passing years, the more it made sense, and the more I thought what a brilliant answer this particular friend had come up with.

My friend's answer to the question was, “A pint amongst friends.” Astonishingly simple, but oh so true, and as my drinking and general life experiences have increased, and become more enriched over the years, I often hark back to that night in the Plough & Harrow, at Oad Street near Sittingbourne, and my friend’s pertinent response. The only rider I might add to that answer would be, “In a decent pub, or otherwise pleasant and enjoyable surroundings.”

As I said in my last post, beer is the best long drink in the world, and a sociable drink at that. Sure we might enjoy a decent glass or two of beer at home, either stuck in front of the television, or else sitting in front of the computer. I quite often relax in this manner, in fact I’m enjoying a glass of beer now (Budvar Dark), as I write this post.  Even better though than enjoying that glass of beer alone, is enjoying it whilst sat down to dinner with ones family or with friends. The enjoyment of the beer, and the way it compliments the food, coupled with the  conversation which might be occurring, plus the general ambience of the whole situation, all combine to create a far more enjoyable experience than just sitting their alone, supping at the beer.

In a pub or bar environment the same rules apply. Having a good time, over a pint or three, whilst in the company of friends, really takes a lot of beating. Combine this with a decent, friendly pub (or bar), full of atmosphere and good vibes, and the whole experience shifts up a gear or two to a different level. In summer, the same could equally apply to sitting in a pub garden here in the UK, or enjoying a barbecue at home, or at a friend’s house. Further a field, enjoying the open air experience of a litre or two of bier in a traditional Bavarian Bier Garten, or on the terrace of a West Coast American brew-pub. Obviously a decent beer adds to the experience, but even a relatively common one can be almost as enjoyable under the right circumstances.

Many beer writers and beer hunters get a bit too carried away at times, in the constant pursuit of something different or new. Sometimes it pays to take a step or two back, enjoy the moment, or the occasion for what it is, and be thankful for what is in front of one. As another friend of mine used to say, as we chinked our glasses together at the start of an eagerly anticipated drinking session, “May these be the worst of your days!”.

Footnote: the photo at the top of a group of friends enjoying an evening in the pub, was taken nearly 30 years ago. See if you can spot yours truly?

The people in that photo look like contestants. Have you or your friends been on Bullseye?

If so, can I have your Bullseye tankard?

It must have been taken in Movember.

Taken in front of the Vigo Inn Daddlums Table for sure.

Grey shirt, immediately behind the fellow in the green pullover. Not much I'd dispute in this post, Paul.

Yes, at times some beer enthusiasts seem to forget the context in which beer is enjoyed.

No Cookie, as far as I know, none of the people in the photo have appeared on Bulls-Eye. Mind you I reckon those 80's jumpers will be making a comeback soon.

Mark, you are correct. The photo was taken at the Vigo Inn, after a game of Daddlums. I haven't been in, since the pub re-opened. Must rectify that soon!

Nev, also correct, and brewingman, I can't remember which month the photo was taken, but moustaches were very much in vogue back in the 80's.

Third from the front right. You haven't changes that much. Ahem.