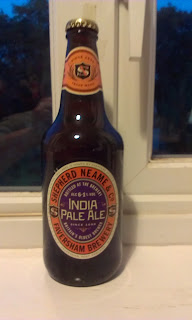 Regular readers of this blog will know I am no fan of Shepherd Neame, despite them being by far and away the largest brewery in Kent, and owning some iconic pubs. Ironic considering I was once a huge devotee of the company's beers; particularly their bitter, but this was back in the day when it was just plain "bitter" and not  a beer with a fancy title such as "Master Brew".

Sometime between the late 1980's and early 1990's, Shepherd Neame beers underwent a dramatic change in both taste and character. Gone was the well-balanced traditional Kentish ale with a lovely flowery hoppiness, which generations of local drinkers had cut their teeth on, and in its place was a beer with a harsh, stewed bitterness and a nasty metallic taste . This was combined with a change in character of the beers, which became thin-tasting, lacking in body, with an unpleasant and very dry aftertaste. Rumour has it the changes were due to the brewery "cleaning-up" its yeast, changing from a multi-strain variety to a single-strain one, thereby losing a lot of individuality and character along the way.

I don't know how true this story is, but try as I might I just can't get used to what Shepherd Neame beers taste like these days, and therefore tend to avoid them. However, towards the end of last year I was intrigued by a post on Mark Dredge's Pencil & Spoon site in which he reviewed two limited edition beers from Shep's, both of which were based on historical recipes from the company's archives. One of these beers was a Double Stout, whilst the other was an India Pale Ale. Being brews from a bygone era, both beers were on the strong side, but intrigued as I was,and despite my best efforts, I never managed to track these rarities down.

Until last weekend that is. Whilst browsing the shelves of Tesco's huge superstore in Sevenoaks, I came across a single bottle of  Shepherd Neame India Pale Ale.. There was no price or descriptive label on the shelf, so this must definitely have been an end of line. I eagerly snapped it up and am now enjoying a lightly chilled glass of it.

I have to day it's rather good. In fact I'd go further and say it's excellent and if the bog-standard Shepherd Neame beers tasted anything remotely like this one, then I would have no hesitation of drinking in their pubs.The only slight drawback with this particular offering is that because it's based on an historic recipe, it's a rather strong 6.1% abv beer that, whilst good for a beer to enjoy and savour, definitely isn't one to have a session on. However, I'm very glad I managed to find it, and am pleased to report that despite its strength it really reminds me of how good Shepherd Neame beers used to taste back in the day when I first started drinking. Now all I need to do is to track down that Double Stout!

The blurb on the back label reads as follows: "An historic brew which conjures up images of high seas and faraway places. An IPA encapsulates centuries of brewing tradition, a quintessentially strong and hoppy beer with a bold, stirring character. Our India Pale Ale delivers this magnificently; pale in colour and generously bittered with locally grown Fuggles hops.
The high hop rate in this brew originally protected the beer during its arduous journey across the continents. The same Kentish hop notes can now be enjoyed for their own sake in this original recipe from Britain's oldest brewer."

The Brilliant Ale in the same series is also supposed to be very good, but I haven't come across any so far.

I entirely agree about the IPA - and I remember the days in the early 80s when Sheps' beers had, as you say, that very distinctive floral hoppiness.

I don't know why the brewery restricted their availability and made them so difficult to obtain.

Both these are available at Lidl at a very reasonable £1.49 a bottle. The IPA is a cracking beer.

Both these are available at Lidl at a very reasonable £1.49 a bottle. The IPA is a cracking beer.

"Rumour has it the changes were due to the brewery "cleaning-up" its yeast, changing from a multi-strain variety to a single-strain one, thereby losing a lot of individuality and character along the way."

Just came across your posting, I can tell you for a fact that Sheps ditched their yeast and replaced it with Whitbread yeast, the yeast came from across the road from the Fremlins Brewery. Before this happened I'd been the Brewery Chemist at Sheps and had actually isolated the two strains that made up Sheps yeast. We banked it so that in an emergency it could be regenerated. Shortly after that and not long before I left, Sheps bought in a ex Whitbread Director and one of his first suggestions was that the yeast be ditched and replaced with Whitbread yeast. Despite lots of warnings how this could have a drastic impact on the beers Sheps went ahead. It did impact hugely on the beer and many Sheps drinkers noticed!