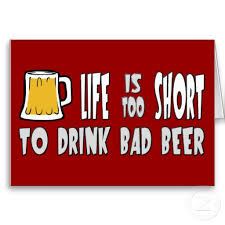 Does anyone know who brews the Firestone Walker American Independence Pale Ale, currently on sale in Wetherspoons outlets? Actually, what I probably should ask is which UK brewery is brewing this 5% beer under licence, as I doubt very much that it's all being imported from across the pond.

Anyway, it was by far the best beer I had last night in our local JDW in Tonbridge, unlike the much vaunted Robinsons Trooper which distinctly underwhelmed. I enjoyed Robinsons ales during my time in Greater Manchester, back in th mid 1970's, but every time I've tried a pint of their beer down here, it's always disappointed. Perhaps Robinson's beers just don't travel, although going back to the Iron Maiden inspired Trooper, Curmudgeon also found it underwhelming, and that was on its home patch in Stockport!

Also disappointing were the two  bottled IPA's from Traditional Scottish Ales which I picked up cheap in Lidl's a week ago. Both Rok and Ben Nevis are just 4.0%, and both fail totally to deliver. Weak and insipid with that nasty "woody" after-taste which to me is normally a sign of yeast infection. There is a brewery not a million miles from here which seems to suffer from the same problem, yet amazingly keeps going. Perhaps some people actually like this in a beer, but I'm not one of them, and I'm glad now that I didn't return to the store, as I was threatening to, and buy some more. I've still got a bottle of Wild Stout, from the same company, to try, but I'm not going to hold my breath.

I also came across some beers with this "woodiness" back in April, whilst in Norwich for the CAMRA Members Weekend. I won't name and shame, as this was three months ago, and the brewery concerned might well have cleaned up its act, but selling beers in this sort of condition, doesn't do anyone any favours, and tarnishes the micro-brewing industry with a largely unwarranted name for producing beers that are hit and miss.

I've got a few more beers to try over the weekend, which I hope will be somewhat better. In the meantime, who is brewing Firestone Walker American Independence Pale Ale?
Posted by Paul Bailey at 22:22

Paul-I haven't come across this yet, but I think it's Adnams of blessed memory.Their seasonal "Fat Sprat" in spite of the silly name, is a cracking beer.

I know exactly what you mean by "woodiness" - it's something that over the years quite a few micro-breweries have seemed to suffer from. Some people probably see it as a sign of an authentic natural flavour, though.

I think a lot of people had rather unrealistic expectations of Trooper - you need to approach it as a rather traditional balanced English ale rather than thinking you'll get a headbanging hop monster. IME it's better on cask than in bottle. For some reason, Robinson's beers seem to manage the transition to bottle less well than many others.

Thanks for the update on Firestone Walker American Independence Pale Ale, David. It is brewed by Adnams, as a Google search has just revealed, and is a collaboration between the company and the multi-award winning Firestone Walker of California. Of course, if I'd looked at the pump-clip more closely I would have seen that. Anyway, there's an excellent piece on the beer on Adnams Head brewer, Fergus Fitzgerald's blog http://adnams.co.uk/about/news/beer-news/exclusive-beer-for-wetherspoon-available-for-american-independence-day/.

You'd better be quick if you want to try this excellent beer though, as distribution is restricted to just one cask per Wetherspoons outlet. (Come to think of it, I'd better get down their myself later, to see if there's any left).

Curmudgeon, I think the pint of Trooper I had the other night was getting past its best anyway, so it may not have been a true reflection on the beer. I still feel though that Robinsons just doesn't travel well. When we had our off-licence, I had their beers a few times on draught, but to me, at least, they always disappointed. Perhaps, being northern ales they dc actually benefit from being pulled through a sparkler, although it pains me to say so!!

I thought the Firestone beer was excellent too. It spoilt my palate for the evening because everything else tasted insipid afterwards.

“This is informative blog”
tunbrigde cabs