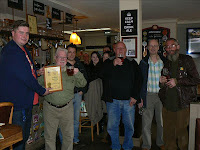 In common with most, if not all, local branches, West Kent CAMRA run a Pub of the Year competition, usually abbreviated to POTY – an acronym I cringe at every time I hear it, even if it does save a bit of typing!  I don’t know whether this competition is obligatory for branches, or quite how it even came about, but our branch has been awarding this honour for as long as I can remember. 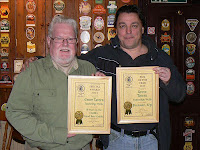 When we first started running the competition, pubs were selected purely on the basis of numbers of votes received, after the membership had been asked to vote for their favourite pub by means of a form printed inside our then branch magazine, “Inn View News”, (now sadly defunct). Unfortunately this system was found to be open to abuse, as well as not making it entirely clear as to what the criteria for election were. I think that it was around this tine that CAMRA nationally set out the areas which pubs were not only to be selected on, but scored on as well. I can’t remember all of them, although I’m certain they’re buried somewhere on the national website, but obviously beer quality is the most important, followed by other criteria, such as the welcome received from bar staff, involvement of the pub with the local community, whether the pub was involved in, or actively supported CAMRA’s aims and campaigns.


Following these guidelines, the branch strategy changed, and we began organising trips, by mini-bus, around a maximum of six short-listed pubs, which had been chosen by members at our annual Good Beer Guide selection meeting. The Pub of the Year was then selected from the scores awarded for each pub by all members participating in the trip, following the guideline criteria set out by CAMRA. In an attempt to present a more level playing field, there was a “weighting formula” applied to certain criteria, but don’t ask me how it worked, as I used to leave the working out to those more experienced in this sort of thing.

These trips were highly enjoyable, but took quite a bit of organising, especially with the hire of a mini-bus and finding a suitable “designated driver” willing to sit there drinking soft drinks all day whilst the rest of us were knocking back the beer. Because of their lengthy nature, the trips invariably had to take place on a Saturday, and finding a mutually agreeable date could also sometimes pose a problem.

Even this system was far from perfect, as concerns were raised, that by the time members had reached the last couple of pubs on the tour, their judgement could well be affected by the amount of beer they had drunk! There was also the charge that voting for Pub of the Year was only open to those taking part in the POTY Trip, so for the last two years the branch has tried a somewhat more encompassing approach. This involves members visiting all six pubs on the short list, in their own time and under their own steam, and scoring then appropriately. Funnily enough, the end results have not been a lot different, but that’s a different story.

So far I haven’t made my contribution to this enhanced selection process; last year I was recovering from illness, whilst this year I have just been too busy. However, I wasn’t too busy to make it along to the award presentations that have taken place recently.

The first took place three weeks ago, and was the award of Pub of the Year 2013,  to the Halfway House, at Brenchley. This, I believe, is the third year running that this unspoilt rural free house has received this accolade, and deservedly so. For anyone not in the know, the Halfway House offers a range of up to10 cask beers, many of them locally sourced, with a mild always included amongst the line-up. All beers are served direct from casks which are kept in a temperature-controlled room, immediately behind the bar. The pub also serves good food and is a delight to visit at any time of year. During the winter months, a cosy log fire keeps the place warm and, aside from the main bar, there is a warren of inter-linked rooms, on two different levels, for those wanting some space of their own, or just some peace and quiet. In summer, there is an extensive garden to the rear, and side of the pub, with play equipment for energetic youngsters, and a separate “adults only” beer garden for those not wanting children running around under their feet. The latter is the venue for the pub’s twice yearly beer festivals, held over the late May and August bank Holiday Weekends.

We called, to present landlord Richard Allen with his award, following our visit to the Hopbine at Petteridge, after having walked across the fields, through the rain. I was nice to be able to warm ourselves by the fire, whilst enjoying the excellent beers from the wide range that Richard stocks.

We have had two other presentations following our visit to Brenchley; both of which took place on the Saturday just gone. This year two pubs ended up as joint runners up, and both were in Tunbridge Wells. The first was the Bedford, handily located next to the town’s railway station. Since owner, Simon Lewis took on the lease from Greene King and negotiated a deal allowing him to sell a range of independently-brewed beers alongside their own, the pub has gone from strength to strength and has become the premier ale-house in Tunbridge Wells.

Because of Simon’s commitments elsewhere in the brewing industry, the Bedford is now run by general manager Mark Nicholson and his team. Mark has continued Simon’s policy of stocking a range of different beers, and different styles, sourced mainly from small breweries based in either Kent or Sussex, often showcasing the products of a brewery whose beers we don’t often see in this part of the world. Last Saturday was no exception, with three different beers from Goody Ales of Herne, near Canterbury, in tap including a porter, plus two beers from the ever reliable Gadds of Ramsgate. There was also an “enigma ale” from the Canterbury Brewery; more about that in a separate post. Apart from locally produced pies, the Bedford doesn’t currently serve much in the way of food, but that is about to change, with the re-fitting of the upstairs kitchen and the appointment of a chef who is known to many local drinkers  and CAMRA members.

After a couple of hours in the Bedford, it was time to leave and walk the short distance up the hill to the other runner-up pub; the GroveTavern. Tucked away in the maze of small winding streets that lead down to the High Street, the Grove is almost certainly the smallest,  and possibly the oldest in pub in Tunbridge Wells. So far as friendly and welcoming locals are concerned, it is also one of the best. The beer range is perhaps slightly more mainstream than the Bedford’s, but it still features interesting guests from time to time, alongside the mainstays of Harvey’s Best and Taylor’s Landlord. When we called in St Austell Trelawney and Harvey’s Olympia were on sale, alongside the aforementioned.

Being so small, and with no room for a kitchen, and precious little space for dining tables, the Grove is a beer only house, but is none the worse for that. Landlord Steve Baxter has held the license on the pub since 2003, but leaves the day to day running to manager Sam and bar staff Sally and Tony, whilst he concentrates on his other passion, and business interest - computers. Being both a drinker’s pub as well as a locals’ one, it is safe to say the Grove attracts the cream of Tunbridge Wells's “thinkers”, and there is often some interesting and, at times lively, debate taking place at the bar.

There was another certificate to present to Steve, alongside that for runner up in the Pub of the Year competition, 2013, sees the Grove Tavern’s 10th consecutive appearance in the Good Beer Guide, so the pub was presented with a special certificate commemorating this fact.

All in all, both Saturdays were good days out, and all three pubs worthy recipients of their respective awards.
Posted by Paul Bailey at 22:33

Agreed, even though he looks like a refugee from the cast of "The Hobbit"!