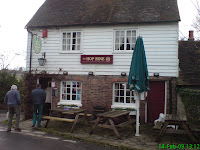 When I first started drinking, back in the early 1970's, the pub trade was much more of a calling that it is today. There was far more stability in the world of pubs, and a degree of certainty that is sadly missing today. One of many constants that existed then was the way that pubs tended to remain in families, being passed down from father to son, or from mother to daughter. It was not uncommon  for licensees to remain at the helm of their pub for a substantial number of years; often notching up several decades worth of service. Contrast this to today's pub world where things are much more transient, and licensees tend to come and go with all too familiar regularity, often to the detriment of the pub itself.

One local pub which goes against the grain of this modern trend, and continues the ideal of long service, is the Hopbine, situated in the tiny hamlet of Petteridge, between Brenchley and Lamberhurst. It was to here that a small contingent of West Kent CAMRA members headed on an increasingly dull and overcast Saturday, in order to catch up with the goings on at the pub, and also to treat ourselves to a spot of lunch.

Travelling by bus from Tunbridge Wells, we alighted on the edge of Brenchley village and then made the short walk down Petteridge Lane, before climbing back up to the hamlet itself and to the Hopbine,  poised before us on the brow of a hill. The Hopbine is a former King & Barnes pub, and the signs outside give the impression this is still the case. However, as many people remember K & B were taken over by the Dorset brewers, Hall & Woodhouse, back in 2000, and all brewing operations at the firm's Horsham site ceased soon afterwards. Today the Hopbine offers Badger First Gold and Tanglefoot alongside Dorset-brewed King& Barnes Sussex Bitter.

We all opted for the First Gold, which was in excellent condition, golden-coloured, well-hopped and served at just the right temperature to make the first beer of the day, and a birthday one for me, absolutely spot on. There were a small crowd of regulars in the pub, several of whom I recognised from previous visits, but landlord Mike Winser was pleased to see us and was able to spend a bit of time chatting. This article is about long service and Mike and his wife "B" have certainly achieved that, clocking up 25 years behind the bar. They are planning to retire later this year, as Mike will have reached 65 and, as he was telling us, his sciatica was playing him up something rotten - one of the hazards of being a landlord I suppose, with all those barrels to move around down in a cramped cellar.

I say cramped, but for all I know the Hopbime's cellar could be quite spacious, as the pub is built into the side of a hill. Its exact age is uncertain, but it has only been a pub since 1949, when it was converted from two former adjoining cottages. Evidence of this can be seen internally, by the fireplace which partially separates one part of the pub from the other. When King & Barnes acquired it in 1984, it was their most easterly outpost, and the same applied to current owners, Hall & Woodhouse, although the company have since constructed a large motel complex, at Wrotham Heath. The latter though is far easier for the Badger drays to service, as it is close to the junctions of the M20, A20 and A25. Mike believes the company will sell the pub when he  retires, although they have promised to keep it on for as long as him and "B" want to keep on running it.

As I said, a quarter of a century is pretty impressive in the pub trade these days, even if it was once quite common. Mike pointed out a presentation plate, from the brewery, displayed on the wall which proudly announces this achievement. The couple had recently been guests of  Hall & Woodhouse, spending a few days at the company's premier hotel in Blandford Forum. They had been shown round the firm's brand new £5 million brewery, which replaces its Victorian predecessor on an adjoining site, and Mike was keen to emphasise the company's commitment to brewing, stating that Chairman, Mark Woodhouse is a brewer, rather than an accountant.

As mentioned earlier, it was our intention to have lunch at the pub, and as it was filling up quite quickly, we placed our orders and grabbed a table to wait for our food to arrive. All the food at the Hopbine is genuinely "home cooked" by "B", and my steak and kidney pie was a generous slice of proper pie, (meat encased between a shortcrust pastry base and a lid, rather than a meat stew in an earthenware dish, topped with a loose lid of puff pastry!). It was accompanied with chips, vegetables and a small jug of gravy - nice touch there. I washed it down with a further pint of First Gold, although one member of our party did try the Tanglefoot after Mike had described how the brewery had tweaked the recipe, making the beer less sweet. The new version had proved a hit with his regulars, most of whom live within walking distance and therefore don't have to worry about driving home. We agreed with his assessment that the change in recipe had disguised the 4.9% strength of the beer.

We left shortly before the pub closed for the afternoon. Being a country pub, with mainly regular rather than passing trade, the Hopbine still keeps old-fashioned opening hours. As always, it had been a most enjoyable visit, and it was good to see such a tucked-away pub so busy. Before finishing this article though, special mention should be made of another old-fashioned tradition maintained there; namely the outside gents! The Hopbine is one of only two pubs I know, in this area at least, that still possesses such facilities - the other being the Golding Hop at Plaxtol. Long may this continue!

Last year the Davenport Arms at Woodford near Stockport celebrated eighty years under the stewardship of four generations of the Hallworth family.