The Taste of Things to Come

Apart from an enforced day off from work last Tuesday, due to heavy snow, there’s not been much for me to blog about just recently. It’s a strange time of year, with winter continuing to drag on despite an all too brief hint of spring the other week. On the local CAMRA front there’s not been a lot happening either, apart from a bit of a spat over one of the choices for next year’s (2014) Good Beer Guide. In a nutshell, if people can’t be bothered to turn up to the selection meeting, then they can’t really expect to be taken notice of after the pub’s been chosen. Even more to the point, all branch members were contacted, either by e-mail or snail mail, prior to our AGM, which took place back in November, and were asked to nominate pubs for possible selection, and also for feedback on current entries. No excuses there then, although two somewhat self-opinionated people, one of whom is no longer a member, did manage to stir up an awful lot of trouble which, quite frankly, my colleagues on the committee could have done without. 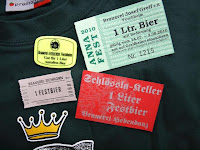 This withstanding, we’ve got a bus trip scheduled for next Saturday, see here, and then the following Friday I will be joining friends and colleagues from Maidstone & Mid-Kent CAMRA for their annual Good Friday Ramble. This will start from a convenient railway station, and then take in a rural watering hole along the way. (I understand this year's choice is a pub which majors on Goacher’s beers, served straight from the cask). In between these two events, I’ve got a trip planned to the wilds of Norfolk, in order to visit my parents. Mum and dad are both in their early 80’s, and I’ve not seen them since the autumn, so it will be good to spend some time together catching up on things. Doubtless there will be the chance of visiting a local pub or two and sampling a few of Norfolk’s impressive selection of locally-brewed ales.

The following month will see me returning to Norfolk, this time for the CAMRA Member’s Weekend and National AGM, which takes place from 19th to 21st April, in Norwich at St Andrew’s and Blackfriars’ Halls. I attended the Member's Weekend three years ago, when it was held on the Isle of Man, and thoroughly enjoyed it. Despite numerous visits to Norfolk over the past 20 years or so, Norwich is a city I have never really had the chance to drink in. My parents live some 20 miles from the city, and on the occasions I have visited, I have always been driving. It will therefore be a pleasure to explore a few of the city’s many fine alehouses, including such gems as the King’s Head, the Gardeners Arms (Murderers), Kett’s Tavern and the legendary Fat Cat. It will also be good to meet up with friends from other CAMRA branches, and to spend some time in the member’s beer exhibition which is being held in Blackfriars Hall.

Later in the year, the third week in July to be precise, I will be attending the legendary Annafest, which takes place every year around this time in the small Franconian town of Forchheim, between Bamberg and Nuremberg. Although billed as a folk festival, beer is one of the main features of Annafest, where around 20 Kellers (beer gardens) offer beer from Forchheim’s four breweries, alongside others from the surrounding area. Most of the breweries brew a special festival beer at around 5.5 to 6.5%. The Kellers are situated in a wooded area just outside the town; some are open all year (within season), whilst others open just for the ten day duration of Annafest. As well as various live music acts, there are fairground attractions, including a large Ferris wheel, plus plenty of stalls selling food to help soak up all that beer!

Annafest is an event I’ve wanted to attend for some time, but for a number of reasons I’ve never quite managed it. This year though I’ve booked the flights and have also secured a holiday apartment for son Matthew and myself, right in the centre of Forchheim.  As well as attending the festivities at the Kellers, we’re planning to explore the local area, which is home to a number of small, local breweries, most of which produce beers that are both flavourful and full of character. A return visit to Bamberg will also be on the cards.

So, as March drifts along and Easter fast approaches, there is plenty to look forward to on the beer and pubs front.
Posted by Paul Bailey at 21:44

What was the spat about Paul? Let me know and I'll tell you if they were right or not - haha!
Matt

The spat was over comments received by a couple of people who took no part in the selection process for next year's Good Beer Guide, but then went on to criticise a particular pub.

It wouldn't be fair to name the pub, Matt, but there was a strong difference of opinion between the branch, and the two gentlemen concerned, over the issue of beer quality. (The crazy thing is this pair drink regularly in the pub, so one wonders how they reconcile this with their disparaging comments about the beer served there?).

Just glad I'm no longer on the committee, and relieved that I've distanced myself from GBG surveying and selection process.

Hmm...Can think of a few that meet that criteria... The Dovecote at Capel; Golding Hop at Plaxtol; Halfway House at Brenchley and surprisingly Westerham's brewery tap - The Royal Oak.
Matt

You're way off track, Matt, although there are a couple in your list, I agree, serve poor quality beer.