A Night in the Bedford

There was a great selection of local ales on sale in the Bedford last Wednesday evening. Around a dozen West Kent CAMRA members had pitched up for a social, and to take advantage of the pub's weekly Cask Ale Club, when all cask beers are sold for just £2.50 a pint. 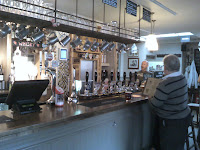 Since drinks consultant and  brewery owner Simon Lewis, took over this Tunbridge Wells pub a couple of years ago, the Bedford has gone from strength to strength, and is now rightly regarded as one of the town's premier alehouses. When we arrived, fresh off the train, we were greeted with a packed pub, and a choice of eight different beers, from three different Kentish breweries. Two of these breweries are not often seen in this part of the county, so close to the border with neighbouring Sussex. Goacher's of Maidstone are the oldest micro-brewery in Kent, having been established in 1983.  Hopdaemon of  Newnham near Faversham, whilst not quite so old, have still been around since 2000.

Three Goacher's beers were on: Real Mild,  Fine Light and Best Dark Ale, and there were also three from Hopdaemon: Golden Braid, Incubus and Skrimshander IPA. Complementing the above were a couple of beers from relative newcomer, Kent Brewery, who pitched in with Black Gold and Porter. I started with Goacher's Mild, a traditional dark mild with a pronounced grainy taste, before moving on to the Kent Brewery  Black Gold, a well-hopped "Black IPA". Light-coloured, session beer, Hopdaemon Golden Braid followed, and I was going to finish with the Kent Brewery Porter, but unfortunately this, together with the other Kent beer, ran out. Hopdaemon Skrimshander was therefore my final pint of the evening, a clean-tasting, aromatic copper-coloured pale ale.

It was good to see a pub so busy mid-week. The Cask Ale Club undoubtedly helped, but the Bedford has become a welcome addition to the drinking scene in Tunbridge Wells and is popular with a wide range of people. It is also good to see a pub putting so much weight behind local breweries, and long may this continue.
Posted by Paul Bailey at 20:05

Good to hear the Bedford's doing well, the brewery is currently closed.

Ed, the official news on RTWB is that "brewing operations are suspended at present, but may re-start in the future". Make what you will of that statement!

It's no secret though that Simon is currently working with Purity Brewery in Warwickshire.

Hmm, good job!
I like your post,visit my homepage here: