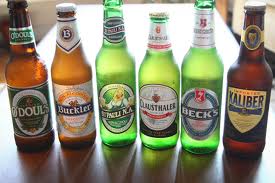 As I mentioned in my previous post I have drunk very little beer over the last 10 months. This is hopefully a temporary state of affairs, but during this time I have obviously missed the taste, so to compensate  have tried various alcohol free and low alcohol beers. I have to admit none have been particularly enjoyable, but some have still been better than nothing! In the pub trade Becks Blue appears to be the best most widely available  alcohol free beer, having pushed the likes of Kaliber and Clausthaler to one side. However, as I haven't been feeling particularly sociable for the best part of a year, visits to the pub have been few and far between, and the majority of the alcohol free and low alcohol beers I've sampled have been consumed at home.

My thoughts on  three alcohol free/low alcohol beers are given at the end of this post, but after months of struggling with them  I've recently come across an excellent website for the Alcohol Free Shop. Based in Greater Manchester I was surprised to see that the shop stocks 24 different types of alcohol-free beer, including some interesting offerings from Erdinger, Krombacher, Maisels, Schneider, Veltins and most surprising of all Bernard from the Czech Republic. The shop also stocks a wide range of alcohol free wines (I hope they taste better than the one from Sainsbury's my wife and I tried the other weekend!), plus alcohol free ciders.

With the exception of the Bernard beer, which is an amber coloured Czech lager, all the others listed above are pilsner style beers. For ale drinkers there's virtually nothing available (I don't know whether the former Whitbread-brew, White Label is still around, but from memory it was pretty awful). Harveys  however, stock two low-alcohol beers in their pubs. Both are produced from regular Harveys beers, before some of the alcohol is removed. John Hop is produced from the company's Best Bitter, whilst their Old Ale is used to produce the dark beer, Bill Brewer.  Both have an abv of 1.0%.  I haven't tried either in many a long year, but from memory the Bill Brewer was slightly more drinkable than the John Hop.

Before ending I want to stress that the sole reason for my avoiding alcohol has been that whilst I enjoy it at the time, it seems to make my anxiety symptoms worse, particularly the following day. It is difficult to know the reasons for this; they may be purely psychological, or alternatively the alcohol may be interacting with my medication. On the other hand it could just be down to the simple fact that alcohol is a central nervous system depressant, and can enhance any feelings of depression. Whatever the reason. I don't want to turn into some rabid anti-alcohol crusader, and as I start to gradually feel better, and slowly cut back on the medication. I will start to gradually re-introduce my system to some proper beers!

Becks Blue -  Probably the widest available alcohol free beer, but in my opinion the worst of the lot. Thin and metallic with a nasty aftertaste to match, this beer to my mind isn't even a distress purchase. In fact when faced with this beer or no beer in a pub I would  go for a mineral water instead!


Bavaria Holland 0.0% alc Premium Original. - It has always puzzled me as to why a company in the Netherlands should adopt the name "Bavaria" for its brands, but nevertheless this alcohol; free beer is  a huge improvement on the Becks version, and quite drinkable, However, it still lacks that certain something.  Most alcohol-free beers can contain up to 0.5% alcohol-by-volume, but Bavaria claim their version is different in that it's specially brewed to contain no alcohol and is a genuine 0.00% beer.


Sainsbury's Low Alcohol Czech Lager. -  Brewed at the Staropramen Brewery in Prague which I know is more of a beer factory than a traditional Czech brewery, but this 0.5% low alcohol beer is the best of the bunch, and at least tastes like a lager.

Hello Paul, it's great to hear you are feeling much better. You have been missed by us local CAMRA members, and we hope you continue to recover. It was very interesting to read your comments on alcohol free and low alcohol beer. My father was diagnosed over a year ago and although still an active CAMRA member can no longer drink normal beer. I will pass on your opinions and details of the Manchester shop (he lives there til March when he moves to Kent!). Thanks, take care and see you soon - Simon

I left out that my Dad has migraine, which unsurprisingly can be exacerbated by alcohol in any form.

Thank-you for your kind words, Simon. Hopefully it won't be too long before I can catch up with you all once again at CAMRA socials.

Sorry to hear about your dad. I wasn't aware that alcohol can exacerbate the symptoms of migraine, but I know how frustrating it is to not be able to enjoy one's favourite tipple! The Manchester shop looks a good bet compared to what the supermarkets stock, so hopefully your dad will be able to find something enjoyable amongst their selection.
Best wishes - Paul

Brew Dog do a low alcohol real ale called Nanny State. It's 0.5%. One can purchase it to drink-in or take-away from any of their bars. I love it. I'm staying off alcohol for some of the same reasons as yourself. So far I'm feeling happier, I'm not missing it and I'm enjoying beer more than ever, albeit the low alcohol variety.

You have done a great job on this article. It’s very readable and highly intelligent. You have even managed to make it understandable and easy to read. You have some real writing talent. Thank you. Alcohol Rehab Scarborough