Frustration at the Bar 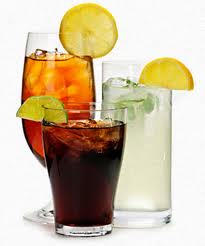 Without wishing to become a bore on the subject I want to continue with the theme of my last post and look further at the options available to non-drinkers in  pubs.When reasons such  as work restraints, potential adverse reactions with medication or perhaps when one has to drive to the pub, whether as "named driver" or  just because there is no other way of getting there, not drinking alcohol in a pub can be a really frustrating experience.

Often when you're in this position Sod's law will apply and not only will the beer selection be something to die for, but the quality of said selection will also be second to none. You can just imagine your friends telling you how good the beers are, and "isn't it a shame you're unable to sample them yourself!". Small matter, we all have our crosses to bear from time to time, and hopefully on another occasion the tables will be reversed and you can get your own back. When you are in this position though the question of  "what to drink?" once again arises.

Normally I would have a pint of an average strength beer (say around 4.0%), before switching to something non-alcoholic. This is always a difficult decision as, ever since my mid-teens, when I began to acquire a taste for beer, I've not been a huge fan of  soft drinks. Drinks such as lemonade, Colas etc not only just don't do it for me taste-wise, but because they're so packed full of sugar I tend to avoid them for health reasons as well. Colas are even worse than lemonade as they're highly acidic in nature and likely to quite rapidly lead to the rotting of one's teeth. So-called "diet" versions are little better, being packed full of artificial sweeteners and additives, and still with the tooth-decay risk, especially in the case of "Diet Colas". Fruit juices provide a better option, but they once again are full of sugar, albeit in a more natural form. I once drank a  pint of pure orange juice and ended up feeling thirstier than when I started!

Often it's down to good old mineral water, but again there's only so much one can drink of this and also bottled water is expensive, particularly in pubs. I appreciate pubs have to make a living, but the mark up on soft-drinks in licensed premises is nothing sort of scandalous and does nothing to encourage non-drinkers to venture along to their local hostelry. For people in my current position, visits to the pub can therefore be not only a frustrating experience, but also an expensive one as well!

Try that J20 one with the Glitter in. Top stuff.

Think I'll give that one a miss thanks Cookie!

Whilst not usually a cider fan, I often ending up drinking Westons Low Alcohol Cider (~0.5%) when designated driver. Certainly had a better flavour than the low alcohol lagers on offer.

Anonymous, a few weeks ago I tried an alcohol-free "pear cider" . It was made by Swedish producer, Kopparberg. I have to say it tasted cloyingly sweet and had an almost over-powering pear aroma that just had to be artificial, although there was no mention of aroma-enhancing additives on the label!

Having never tried any "pear cider" before (with or without alcohol), I can't really comment further. I would be grateful though if someone could explain the difference between perry and "pear cider", as the latter term always seems to be a misnomer in my book!

I'm with you, Paul. I'm not a fan of sweet drinks and so it's always difficult to find something non-alcoholic if I'm the driver. I recently started drinking lime and soda - dirt cheap in most places and not sweet. Give that a go next time you're in need of a non-alcohlic beverage.

Perhaps also in fear of sounding a bore, a normal strength pint of 4% will possibly put you over the drink drive limit so best to avoid having one first if driving.

In response to the question about the difference between Perry and Pear Cider, technically there shouldn't be much in that Perry Cider should only contain Perry pears and Pear cider would use other Pears.

However, in the popular way of doing things nowadays, Perry is a cider made with Pears, and Pear cider is made with apples but has a pear flavouring, hence the chemical and fake taste also noticed in the alcohol free versions. It is similar with the mixed berry and strawberry ciders - Apple based with oversweet flavours added.

Once you try Perry, the fake taste of the alcopop aimed pear ciders becomes a lot more apparent and the real pear flavour of Perry comes through. I avoid any of those flavoured drinks now and drink proper cider or Perry. Perry isnt easy to find in supermarkets, although I picked a bottle up recently in Waitrose which was quite nice.

And back to to the main topic, drinking non alcoholic drinks in pubs is a real challenge if you dont like sweet and fake tasting juice drinks or coke, which is overpriced costing more than beer. Im with Bex - lime and soda is a great drink and cheap too as most places will only charge for the lime cordial so only about 40p for a pint. Blackcurrant and soda is quite good too but either are good with plenty of ice. I quite like tonic water and ginger ale too.