There's been a lot of exciting new developments on the West Kent  brewing scene over the last 18 months or so. I had other concerns during this time and unfortunately many of these developments passed me by, but as I begin to recover from my annus horriblis I'm taking note of what has occurred so that once I'm firmly back in the saddle I know which new beers to look out for. 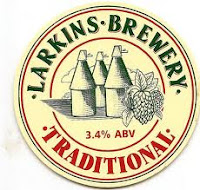 We now have seven breweries operating in the area, five of which have started up during the past couple of years. They join the long established Larkins Brewery, who have recently celebrated their 25th anniversary, plus Westerham Brewery, who started operations back in 2004.  Apart from the addition of a blonde summer ale, Larkins beer range has changed little over the years. The beers are full bodied, with plenty of crystal malt used in the grist. They are also well-hopped, as one would expect from a Kentish beer. Westerham, on the other hand, brew a wide range of seasonal beers in addition to their distinctive core brands, some of which are based on recipes from the original Westerham Brewery which ceased brewing in 1965. New last year were a range of continental style beers, including examples from Germany, Belgium and the Czech Republic.

I've yet to try the beers from  the Black Cat Brewery, based in Groombridge right on the Kent-Sussex border, and Kent Brewery, based at Birling, a short hop from West Malling, both of which are new on the scene, but I have tried some of the beers brewed by  Moodleys, Royal Tunbridge Wells and Tonbridge breweries, all of whom started operations a couple of years ago. All of these new breweries offer a wide range of interesting beers, but rather than me attempt to describe them , why not click on the links and check out the brewery websites concerned. Unfortunately, Larkins  don't have a website, but all the other breweries  listed do. 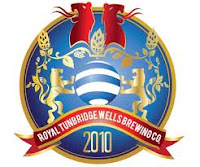 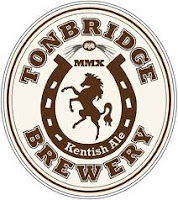 Local drinkers are therefore spoilt when it comes to a choice of cask beers. and I look forward to sampling the new brews that are available, as well as renewing my acquaintance with some old favourites.Indeed, just reading about all them  is a sufficient spur for me to get better as quickly as possible!

I like the pump clips for the German style beer. Good to see you back Paul. It really is.

Thank you Peter, I'm feeling good about being back blogging again, especially as there's so much going on in the "blogosphere" at the moment. I am finding writing very therapeutic, and am certain it's helping with my recovery.

I agree that the pump clips for Westerham's German style beers look very good, and look forward to trying, and reporting on them in the not too distant future!
Best wishes. Paul.

There's lots of new things happening in Kent and it's good to see!

Black Cat is a new one to me, so that's one to look out for. I really like the Kent beers and RTW.

Yes-interesting beers in West Kent now!Of the breweries you mention, I'm most intrigued by Tonbridge:we were selling plants at Sissinghurst Castle last summer,and Paul organised a Kent Beer Tent-Ebony Moon was (my) beer of the weekend.My one encounter with Kent gave me the impression that they are a bit... serious.Keep up the good work.

There is also Millis Brewing, who among their range have a Dark Mild http://www.millisbrewing.com and Larkins Brewery

Orpington Liberal Club www.orpingtonliberalclub.co.uk is having a beer and cider festival on 12 May. Beers from Millis, Larkins and Westerha, and cider from Big Tree Cider fro Big Tree http://www.bigtreecider.co.uk all local West Kent producers

Duncan, I didn't include Millis Brewing in my list purely because they are outside the area covered by CAMRA West Kent. I did however, include Larkins who by a long shot are our oldest established micro brewery.

Thanks for lettng people know about the Beer Festival at Orpington Liberal Club. Hope it goes well.

Long time since I commented on this. The beer festival went well thanks. We've got a lot of West kent beers on the bar over the next few weeks from Westerham, Royal Tunbridge Wells and Tonbridge (as well as Surrey Hills).
Take a look http://www.orpingtonliberalclub.co.uk/real_ale_9.html