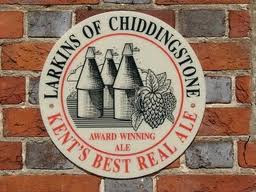 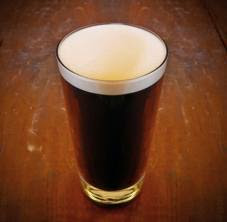 I finally got my hands on some Larkins Porter last night, and boy was it good! I attended a pre-AGM CAMRA Committee meeting, held at the excellent Royal Oak in Tunbridge Wells where, amongst some other interesting offerings, my friend and I spotted a hand pump with Larkins Porter on tap.

I ought to declare an interest here, as I am CAMRA Brewery Liaison Officer for Larkins, and am a fairly regular visitor to the brewery. Even so, whenever I call round to see owner Bob Dockerty, he never seems to have any Porter on tap. Bob brews this strong, dark, tasty beer twice a year, and then allows it to matures, in cask, for a minimum of six weeks before sending it out to trade. Traditionally the first batch is not released until Bonfire Night, meaning that the beer will have been brewed back in mid-September. This brew normally lasts through until Christmas, after which Bob normally brews a second batch. Very occasionally, he will produce a third batch, although this is quite a rare occurrence, as for some reason, strong dark ales sell well in the run-up to Christmas, but not so well afterwards.

So, just over a week from the beer's launch, it was good to enjoy a few glasses of it last night. Brewed from a grist that includes plenty of chocolate and crystal malts, Larkins Porter has a rich, full mouth feel, with plenty of bitterness to match the lush sweetness of the malts. At a strength of 5.2%, it is a beer for savouring, rather than swilling. Even so, I couldn't resist having three pints of it!

Larkins wasn't the only porter I enjoyed last night. Simon Lewis, owner of and brewer at the recently opened Royal Tunbridge Wells Brewery was also present at the meeting, and he brought along a bottle of his own new Porter for us to try. With an abv of 4.8%, it is similar in strength to Larkins, and also similar in colour. Tasted alongside Larkins, RTW is perhaps slightly more bitter. It was difficult to tell, as the latter was far livelier, being bottle-conditioned, but it did have an excellent aroma. It is a beer that I definitely look forward to sampling, when it appears on draught. I will also pick up a few bottles once they make an appearance in local shops.

Hello ...
My name is Ricardo, aui I live in Brazil and I really enjoyed of your posts, I'm adding your blog to my reading list ..
Pass on my blog and leave a comment, craft beer is growing in Brazil for a look of my blog .... link below ...
Ein Prosit !!!

Thanks, Ricardo. Glad to hear the craft beer movement is growing in Brazil; I will check out your blog to see for myself.

Hi Paul, great to read about Larkins, its my local brewery and always superb. Do you know if they ever bottle their beers, and if they do, where one could get their hands on them?

Hi Anonymous,
Unfortunately Larkins do not bottle their beers, which is a great shame for those of us who like to drink at home.

Thanks Paul, having never seen them, I feared that response. Back to the Spotted Dog then!