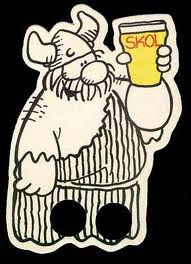 In a previous post about The Death of the English Pub, I described some of the problems facing the pub trade back in the early 1970's. These were highlighted in the book of the same title.

One subject that barely received a mention in the book, was that of British Lager. This is perhaps hardly surprising, as back then lager counted for about 2% of total beer sales. The only reference I recall was to Carlsberg and Tuborg Lagers, brewed under licence at the time by Watneys and Trumans respectively. Decrying their pitifully low strength, a reviewer from the Daily Mirror had made the comment "We think these two lagers more suitable for a maiden aunt of moderate habits than a man who uses his muscles." That comment sums up the main problem with British Lager 40 years ago; namely it was as weak as gnat's piss!

I can remember when lager as a drink first entered my consciousness. I was aged 17, and was with a group of school friends on a night out in Folkestone. With the exception of a friend of a friend, who had joined us for the evening, none of us was legally old enough to be drinking in a pub, but that didn't seem to really matter back then. I can't recall the name of the pub, and I don't think it was anything special, but it was in the centre of Folkestone, and I remember the aforementioned "friend of a friend" ordering a pint of "lager and lime". (By the way, I never got to know the real name of this character. He was referred to as "Dinky Dalton", and as he seemed a bit effeminate I didn't like to enquire further!).

At first I thought this was a soft drink, and I wondered why Mr Dalton, who was trying hard to project an image of sophistication, was drinking such a drink. I was vaguely aware from childhood of a concoction called Limeade and Lager, but this was something different). I have to say the drink looked appealing in the glass, even if it was only Harp Lager! For a start it came in its own stylized glass, and second being chilled, and with the beads of condensation running down the side of the glass, it was worth ordering one myself. Before doing so I asked Mr Dalton what the purpose of the lime was? His reply was it took the edge off the beer. I skipped on the lime, but found the beer itself totally unremarkable (perhaps it would have been better with a shot of lime in it!). This lack of any real endearing characteristics was hardly surprising as, apart from the might of the Guinness empire behind it, Harp never really had much going for it. (You could say a real triumph of style over substance!)

Harp was probably the most widely distributed British-brewed lager during the early 1970's, but it was closely followed by Heineken, which was stocked by Whitbread in most of their pubs. However, with an abv of only 3.4%, it was nothing like its continental namesake, which is brewed to a respectable strength of 5%. The story goes that when Colonel Whitbread approached Freddy Heineken when he was first looking for a continental-style beer to sell in his company's pubs. However, he was convinced that a five percent strength beer would be too strong for British drinkers, used to supping milds, bitters and light ales most of which were brewed to a strength about 3.5%. He managed to persuade Freddy and the rest of the Heineken management to allow Whitbread to brew a much weaker version of their famous beer under licence, which is how the ultra-weak Heineken came to be sold in the UK.

Like I said earlier, not only was this British-brewed lager as weak as gnat's piss, but it tasted pretty much like it as well! There is a good reason why classic European Pilsner-style lagers are brewed at around 5%; they need sufficient body not only to counter the high hopping rate, but also to allow the necessary maturation period to take place. As I write I am drinking a bottle of Pilsner Urquell; it may have lost some of it's character over the last couple of decades, but it's still a classic beer light years removed from such horrors as Harp, Whitbread-brewed Heineken, Skol etc.

Other lagers popular at this time were the aforementioned UK-brewed versions of Carlsberg and Tuborg, plus that old favourite Carling Black Label. Now I'm no fan of Carling, but it is one British lager that does seem to have stood the pace of time and is a rare survivor from 40 years or so ago. It's slightly higher strength of 4% may have helped it's longevity, as well as some clever advertising campaigns.

As the seventies unfolded, many of Britain's independent brewers decided to jump on the band waggon and started producing their own lagers. Most were instantly forgettable; I remember "lagers" such as Einhorn from Robinsons, Regal (a palindrome of lager) from Holts, Grunhalle Lager from Greenall Whitley and Brock Lager from Hall & Woodhouse to name but a few. All pretty dire, and all best forgotten! The story was that most of these ersatz lagers were brewed using an infusion mash, rather than the traditional continental decoction mash, were bittered using UK hops, and only received the minimum amount of maturation (lagering); nothing new there then, as many of today's international brands, also receive little or no proper lagering either!

Despite it's lack of taste, and total absence of any real pedigree, lager sales went through the roof during the later half of the 1970's and into the 80's. In the next part of "British Lager", I'll be looking at the rise of Premium Lagers, and the so-called international brands.
Posted by Paul Bailey at 20:44

The top-fermented "lagers" were referred to as "bastard lagers". Another was Hyde's Amboss (Amboss being the German for Anvil, Hydes' logo).

Grunhalle, I believe, was always bottom-fermented with some approximation to a proper lager brewing process. I used to like it when I was 17 :-)

I remember Amboss, Curmudgeon, although I don't think I ever tried it. Sam Smith's Ayingerbraeu was pretty good, from what I remember; have tried the real thing whilst out in Germany!

As a CAMRA member, though, you need to use the term "chemical fizz" a bit more.

I'm working on part 2 at the moment, Cookie. As for the term "chemical fizz", well that's a bit harsh. I prefer Curmudgeon's description "bastard lagers"!

im sure ayinger was imported from germany not brewed here.

No, it was brewed under licence by Sam Smith's. Eventually as an economy measure they decided to stop paying royalties to Ayingerbrau and rechristened it "Samuel Smith's Alpine Lager", although using the same font depicting a cheery Bavarian bloke. It's 4.5% ABV, so about the strongest "ordinary" lager around.

Cookie has been known to venture into Sam Smith's pubs so I wonder if he's tried it.