The Train Now Standing at Platform One 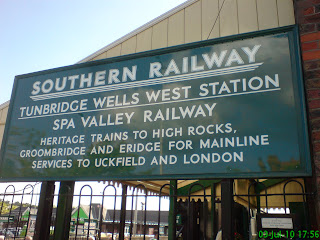 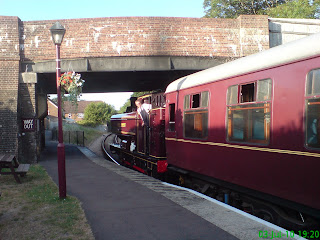 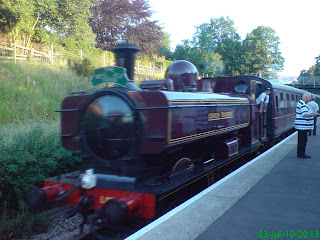 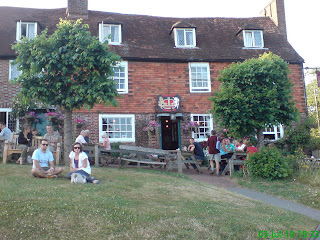 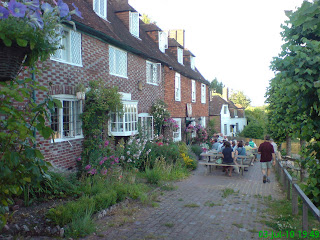 I wrote in a previous post that it is often easy to over-look attractions on ones own doorstep, in favour of those from further afield. After this point was confirmed, during my recent walk along part of the Wealdway, it was further reinforced during last night's CAMRA social.

Our Social Secretary had arranged a trip for us on one of the Spa Valley Railway's Real Ale and Fish & Chip Special trains. For the uninitiated, the Spa Valley Railway operates part of the former Tunbridge Wells West to Eridge route. The railway plans to open right through to Eridge later this year, but for the time being trains terminate and turn round at Groombridge, on the Kent-Sussex border. The line originally connected with Tunbridge Well's other (and now only station, Tunbridge Wells Central), and closed comparatively recently, back in 1985. The closure was forced on a British Rail management that had been starved of cash by the Thatcher administration. For the sake of a paltry couple of million, this useful diversionary line was axed and the large station site at Tunbridge Wells West sold for re-development. A massive Sainsbury's supermarket now occupies the site.

A group of rail enthusiasts saw things differently though and slowly, and it must be added with some assistance from Sainsbury's, raised sufficient funds to purchase the trackbed, along with a former engine shed at the West station, which now forms their headquarters. Twenty-five years on and the Spa Valley Railway is now a major tourist attraction, and if all goes to plan will soon be linking back up with mainline services at Eridge, on the Uckfield Line.

We were therefore glad to join the railway on their Fish & Chip Special last night, which also had the added bonus of serving a drop of the real thing. Sixteen of us boarded the 18:45 service and after being directed to our comfortable, ex-BR mainline carriage, made our way to the buffet car, Kate, to sample the liquid refreshment that was on offer. The two beers available were Larkins Traditional, plus Best Bitter from the newly opened Royal Tunbridge Wells Brewery. Both of course were racked bright, and were probably slightly on the warm side, but at £2.70 a pint, coupled with a comfortable seat to watch the Kent and Sussex countryside pass by whilst enjoying the beers, this represented excellent value for money.

As we slowly steamed out of the West station, the train staff brought round our pre-ordered fish and chips, safely stored in polystyrene enclosed trays to minimise heat loss. We had just sufficient time to finish our meal when the train pulled in to Groombridge. The package gave the option of remaining on the train and enjoying two return trips back to Tunbridge Wells, or alighting at Groombridge and then waiting for the final return train at 20:25. This was the option our party went for as it allowed time to walk up to one of the best, and least spoilt pubs, in our branch area, the 16th Century Crown, that overlooks the village green.

En route we passed Groombridge's other remaining pub, the Junction Inn, which also looked a welcoming prospect, but unfortunately our itinerary didn't allow sufficient time to call in. Groombridge is unusual in that it straddles the Kent-Sussex border. The older part of the village is on a steep hill on the Medway Valley, overlooking the Green, whilst the slightly newer part is just across the river, in Sussex. The Crown is part of a row of attractive brick and tile-hung cottages that overlook the Green, with a well-worn brick path passing in front. It has a timeless feel to it that continues when one steps inside.

On a beautiful June evening though, most people were sitting on benches and tables outside, and after ordering our beer, we joined them. Harveys Best and Hepworths Pullman were the beers on offer. I stuck to the latter, which was in excellent form. Unfortunately there was only time for a couple of pints before we had to make our way back to the station where the train was waiting to transport us back to Tunbridge Wells. It is quite a stiff climb back up to the railway's terminus, forcing the steam locomotive to work hard as it pulled our train up the steep gradient.

The night was still quite young, so we made our way to the Pantiles, which is the oldest, and best known area of Tunbridge Wells. I am pleased to report that this part of town was buzzing, with crowds of people sitting out at tables outside the numerous cafes and bars along the famous Colonnade walk. We headed for a bar called the Ragged Trousers; a pleasant, single roomed establishment that, like the pavement outside, was absolutely heaving. The only drawback was that the staff had run out of glasses, so we had to settle for plastic ones (ugh!). The Larkins Traditional and Ringwood Boon Doggle though were both very good.

Our final port of call was the Sussex Arms. I have written about the Sussex in a previous post, so I won't repeat myself here. Although the pub is just round the corner from the main part of the Pantiles, tucked away down a side mews, it was quiet compared to where we had just come from. Although the Sussex is a Greene King pub, here were a couple of guest ales on, including Larkins Traditional (again) at £2.50 a pint from a cask perched up on the bar, and Bomber County, from Tom Wood. I opted for the later, which is a dark, full-bodied 4.8% bitter. Later I tried a pint of Greene Kings World Cup offering. I didn't bother making a note of the beer's name, but it was pleasant enough all the same. The bar staff seemed grateful for our patronage, especially as the pub was quiet. The beers we sampled in the Sussex were in fine fettle, so we were quite happy to linger there.

So ended a very pleasant evening that saw us visiting two of the top tourist attractions in Tunbridge Wells. As I said at the beginning of this post, it is all too easy to miss things on one's own doorstep, and once again last night's outing proved the folly of ignoring this observation.
Posted by Paul Bailey at 16:29