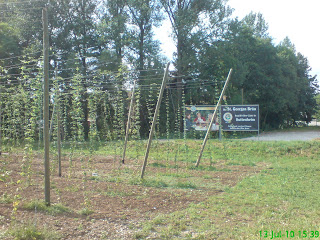 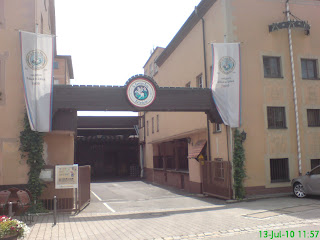 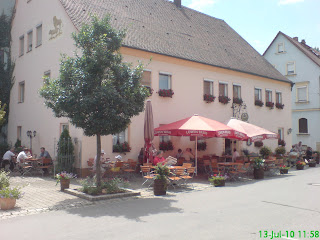 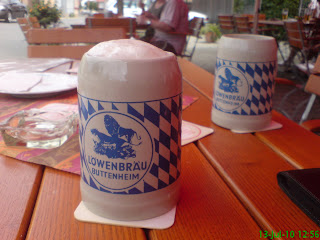 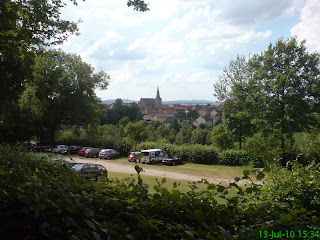 The only other trip out of our holiday was a train ride to the village of Buttenheim. It was a 30 minute walk across town from our holiday apartment to railway station which may explain, in part, why we didn't make any similar trips, but anyway, Buttenheim was just three stops away by local RB train. Although the station is signed as Buttenheim, it is actually in the . Buttenheim itself was a good twenty minute walk away which would have been fine under normal circumstances, but not a lot of fun in the thirty degree heat!

Never mind, the trek was well worth it, as Buttenheim is home to two reasonably sized breweries. What's more St Georgen Braeu and Loewenbraeu are right next door to each other! We couldn't miss them as we turned into Marktstr., but unfortunately noticed that the St Georgen Braeu tap was closed (Ruhetag). Loewenbraeu though, was certainly open for business. We settled ourselves at a table in front of the brewery, and were soon enjoying cool, foaming Krugs of the company's Ungespundetes Lagerbier, along with a lunchtime meal of roast chicken, potato dumpling (Kloss) and purred cabbage. I asked the waitress whether other Loewenbraeu beers were available, but she said Ungespundetes was the only they had on draught.

We were keen to sample St Georgen Braeu beers, and after having read in John Conen's excellent and Franconia Guide, that both breweries had bierkellers on the edge of the village, we followed his directons and soon found ourselves seated in the shady St Georgen Bierkeller, overlooking the village. At the keller we were able to sample both the brewery's Helles and their Kellerbier. I had drank the latter previously, back in the when the beer had featured as part of one of Wetherspoons International Beer Festivals. As we sat, whiling away the afternoon in the cool shade of the bier-keller. We noticed that it was slowly starting to fill up. I can think of few better ways to spend a baking hot summer’s afternoon.


Despite having consumed several half litres of beer, under a hot sun that day, I was keen to try some of the other Loewenbraeu beers. Their keller is opposite that of St Georgen Braeu, but on approaching it, we noticed it was closed. I suppose it made sense, seeing as their brewery tap was open, whilst that of their neighbour closed, for the situation with the kellers to be reversed.

It was probably just as well the keller was closed, and as we made our way slowly back to the station, I couldn’t help thinking fancy living in a place with two breweries next to one another. Wouldn’t that be like living in paradise? Particularly as I forgot to mention that all the beers we enjoyed that day in Buttenheim retailed at just 1.80 Euros per half litre. Bliss!