Look, a decent pub, close to the hotel, well fancy that! My recent post about Barry Island’s excellent Craft Republic bar kicked off with a few slightly tongue in cheek comments about unexpected, or unplanned coincidences. Good ones, of course, but all revolving around the often-uncanny ability of choosing a hotel, and then magically discovering a really good pub or brewery tap in the immediate vicinity. 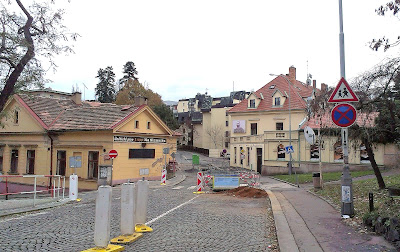 To this day, Mrs PBT’s swears I do this deliberately, but that’s just not true, as my main criteria in selecting somewhere to stay are as follows: A location that is pleasant, convenient and above all safe. A hotel where breakfast is included – even if it is just continental, a fair, reasonable, and affordable price, that offers free cancellation, just in case the unexpected occurs, plus decent reviews that are unbiased and give a good idea of what to expect. 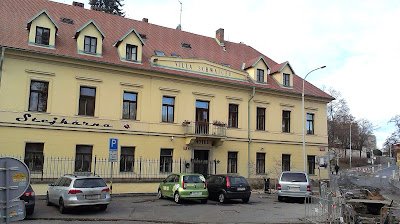 In almost 3 decades of domestic and foreign travel, I have only cocked-up on a handful of occasions and, fortunately for me, I was traveling solo each time. Furthermore, none of these booking “mistakes” were absolute disasters, they just didn’t live up to expectations, and if I’m brutally honest, were the result of penny pinching on my part. I won’t detail any of these poor choices here, as I want to get on with the main point of the article, but if you really want to know, then ask me privately, preferably over a pint. 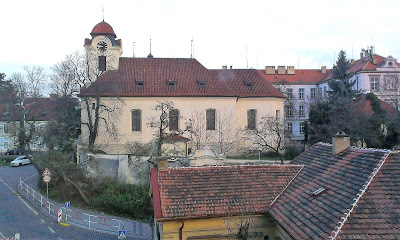 So, let’s look now at some positive experiences when we have stayed somewhere, and there mysteriously just happened to be a top-notch pub or bar, possibly even one that’s nationally or internationally renowned as a place of excellence, and one that should be on every beer drinkers wish-list. 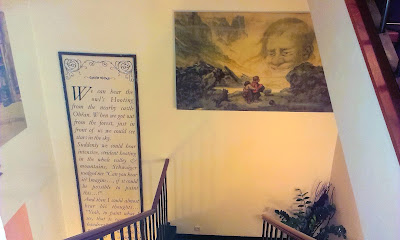 The first example that springs to mind, doesn’t fall into that last category, and if I’m being truthful was a place that my good lady wife urged us to try, probably on account of it being just a stone’s throw from our hotel. It was Mrs PBT’s first visit to Prague and the Czech Republic, and I had managed to secure us a really nice hotel, in the form of the opulent Villa Schwaiger, in the Bubeneč district, of Prague 6. 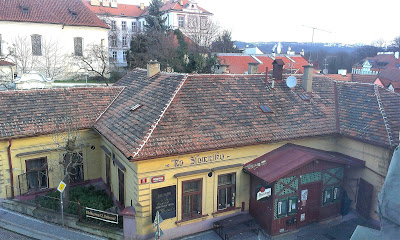 There, literally on the other side of the hotel forecourt, was a real local’s pub called Hostinec Na Slamniku. Offering traditional Czech food, and Únětické pivo 12˚ - a wonderfully tasty and bitter, pale lager, this pub had the perfect combination of good food, excellent beer along with a friendly and welcoming atmosphere. It was certainly the find of the trip, so much so that we ate and drank at Na Slamiku on two of the four evenings we were in Prague. 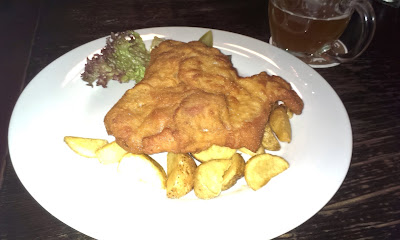 The atmosphere of this unspoilt local pub reminded us of what pubs were like back in the UK, during their 1970's heyday. Even more amazing was the pub was run by just three people: a husband and wife, plus a cook. On our first visit, the place was heaving, and we were lucky to get a seat, and all the while, the husband-and-wife team were busy transporting plates weighed down with good wholesome dishes, and foaming mugs of beer, to the various tables. This they did with a cheery smile for us, and some friendly banter for the locals. 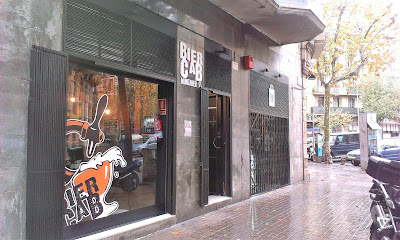 The following year, a visit to Barcelona yielded not one, but two excellent bars, both within easy reach of our hotel.  A day or two before we left for Spain, whilst carrying out a spot of online research – as you do, I chanced upon a bar called Bier Cab. The place was listed as No. 4 of the top 100 beer bars in the world, and whilst I don’t pay a huge amount of attention to these sorts of “league tables,” what I did notice was BierCab being situated in the same street as our hotel! Fortunately, my wife didn’t realise at the time, the pure coincidence of this, otherwise I could have been accused of selecting the hotel purely on its proximity to this bar. 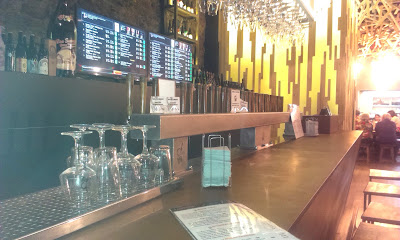 My opportunity to spend a bit of time there came on a very wet and windy Barcelona Saturday afternoon. We had spent much of the morning shopping, followed by a brief spot of lunch. We returned to the hotel to dump our respective purchases, and after several hours traipsing around the shops, both Eileen and Matthew were flagging. I informed them of my desire for a stroll up the road in order to pick up a few bottles of Spanish beer, and asked would they miss me dreadfully if I was to do so? 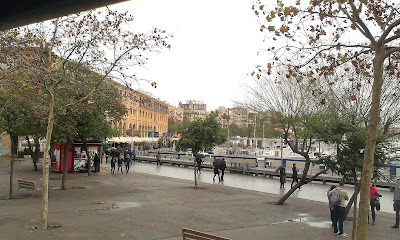 Of course, they wouldn’t, so off I went through the steady, but not too heavy rain. There is something about a wet Saturday afternoon, and it doesn’t seem to matter where in the world one experiences it. I was thinking this as I strode the few blocks up to BierCaB, a modern-looking bar housed in an equally modern block. 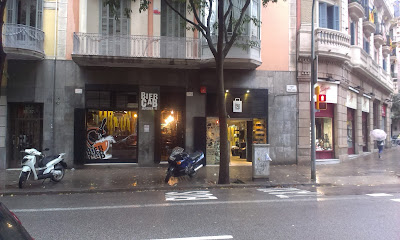 The place had only been open just over a year but had quickly established a reputation for itself which has spread far beyond Barcelona. Stepping inside, there was a long room with the bar to the left, and a series of tables opposite. These extended to the rear of the room. BierCaB boasted 30 taps, with an impressive electronic display on the wall behind to inform punters of the choices available, their strength, colour, and cost. I joined the handful of other customers sitting at the bar in true Spanish style and pondered which of the 30 or so beers to order first. 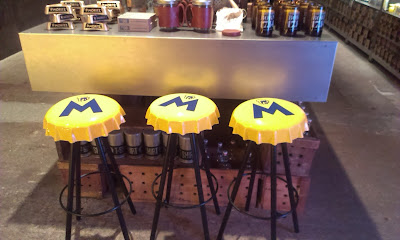 I decided to stay local, and opted for the Spanish offerings, starting with La Pirata Viakrucis; a 5.6% American Pale Ale, brewed at Ca l’Arenys - Cervezas Guineu, a micro-brewery, in the mountains to the north-west of Barcelona.  This was followed by a glass of Farmer’s Choice; a 7.6% Strong Golden Ale from Naparbier of Pamplona. My final beer was another American-style pale ale called Mango, which weighed in at 6.0%. The latter was the most local beer on sale at BierCaB, coming from the Piris Brewery who are based in central Barcelona. Whilst sitting at the bar, enjoying these beers, I indulged myself with a plate of nachos, covered in melted Mexican cheese, to help soak up the rather strong beer. 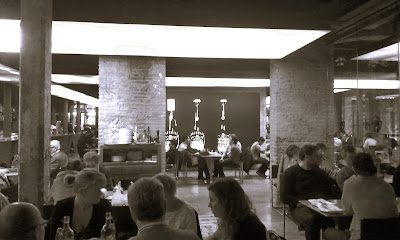 To have a top-rated beer bar at one end of the street, could be viewed as coincidence, but to have a brewpub just five minutes’ walk in the other direction from our hotel should surely be seen as deliberate influencing our base for the weekend. Again, I swear I picked the hotel purely for its central location, its price and its positive reviews and indeed knew nothing about the La Fabrica Moritz just around the corner. The “Moritz Factory” is a popular and fashionable brew pub on the Ronda Sant Antoni that occupies the site of the original Moritz Brewery. 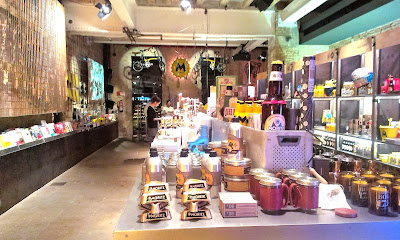 The Moritz Brewery was founded in 1856 when Louis Moritz Trautmann, who came from the Alsace region of France, brewed his first beer. Just eight years later, in 1864, Moritz constructed a large modern brewery, which became known as the La Fabrica Moritz. Despite winning numerous awards and surviving the Spanish Civil War, the company hit hard times, closing the brewery in 1966 and moving production outside Barcelona to Parets del Vallès. 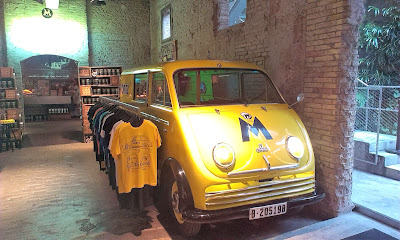 In 1978 Moritz closed completely, but the beer re-emerged in 2004 when descendants of the Moritz family resurrected the brand, which is now brewed under license in Zaragoza. By re-launching the beer, they first brewed back in 1856, Moritz have succeeded in making a dent in Estrella's market dominance and remain a very visible emblem of Catalan autonomy. With its location in the heart of the city’s university district La Fabrica Moritz was especially popular with students and young people.

We visited it three times during the course of our stay; once, in the morning, for breakfast and also on two occasions in the evening. The second of these visits was on our final night in Barcelona, and we had to wait in a queue for a vacant table, such is the bars popularity! So quite by chance I managed to visit two of Barcelona’s most memorable bars and enjoy some excellent beer and food in both.

Footnote: I wrote about all three of  these bars, shortly after our visits to their respective cities, So, Prague was back in December 2013, and Barcelona, almost exactly one year later.

"In nearly 30 decades of domestic and foreign travel ........."
You've aged well - and must remember Ye Olde Cheshire Cheese as quite a modern pub !

Well spotted Paul, and seeing as I don't remember Samuel Johnson - and others, quaffing tankards of foaming ale at Ye Olde Cheshire Cheese, the error has been duly corrected!

Kent does that to folk, T'other Paul.I'm convinced Paul is SO old he remembers when Shepherd Neame were a respected brewery in CAMRA circles.

By the by, is that meal in Prague a schnitzel, Paul ?

Kent certainly does strange things to those of us who have lived here all our lives, but the strangest one of all is what changes did Shepherd Neame make to their beers? I say this, because despite Martin's gentle mocking, I can indeed remember when a pint of Master Brew was definitely worth passing a few pubs for.

Back in the early 1980's, Shepherd Neame beers, and the brewery itself, were highly respected in CAMRA circles, but a decade or so later, some drastic changes occurred which transformed one of the finest local beers available, into something most self-respecting drinkers avoid.

No one seems to know how, or why these changes took place, but ask any Kentish drinker who was around during the time I am referring to, and they will tell you the same story. Shep's beers today are thin, lacking in body, and with a harsh bitterness that leaves an unpleasant aftertaste. No wonder then that local drinkers avoid them, and lager brands far out-sell cask in most of the company's pubs.

Finally, the thing on the plate, in that Prague pub, is indeed a Schnitzel, and very nice it was too!

I'd love someone who worked in Sheps to confirm that the change was within the brewery, Paul, rather than a rapid move away from cask to their expanding cask brands meaning the cask sold slowly.

A pint of Spitfire I had in the Goldengrove, E15 in 1997 was one of the best pints I ever drank, and I recall a decent Master Brew more recently.

I have read this blog often, it is a very impressive and informative blog. the vip gentlemens club.