Keeping tabs on it all

I’ve been very quiet on the blogging front this past week, or at least I have on this site. On the other hand, I’ve been busy posting two, quite lengthy articles on my Paul’s Beer Travels website. There’s a third post that is nearly complete as well, and the topic behind them all is walking the North Downs Way. 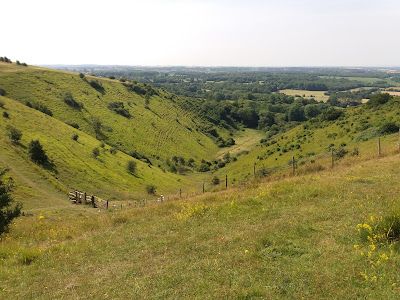 I’d rather neglected the site, these past couple of months, so it was definitely time to make amends, and as there is very little in any of the articles about beer, the website was definitely the home for them. There isn’t that much about beer, or pubs in this short post either, but I’d better include some small morsel, if I don’t want to include the wrath of Greengrass!

Before doing so, there’s some boring domestic stuff to get through, although I’ll keep it as short as possible. First that old perennial – some necessary maintenance on my Skoda Octavia. The water pump and timing belt need replacing every five years, and after checking in the vehicle’s service book, I discovered that the work was last carried out in December 2016. 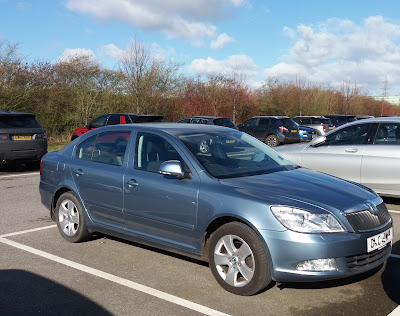 It’s an expensive job, but an essential one, so it was a case of just biting the bullet and booking the vehicle in to a local garage. There’s something about the motor trade that says when the garage tells you they will phone when the work is complete, in reality they almost never do. I ended up making two phone calls, before finally picking the car up shortly before the garage closed. That was essentially Thursday written off, because had I known the job was going to take that long, I would have told the garage to keep the car until the following day, thereby allowing me to go off on a jolly! 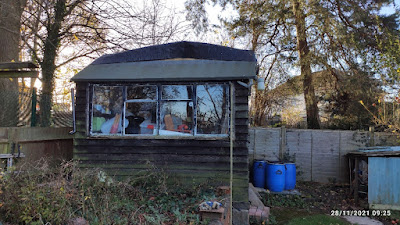 Friday was a wash out for a different reason, and was largely due to the weather, although it did allow me time to shop online for Christmas presents for Eileen, and a new pair of shoes for myself. With 40% off the latter, I’d have been a fool not to have taken advantage of the dreaded Black Friday sales, especially as some new footwear was definitely required.

Sunday was reserved for a pub-based adventure, but not before I spent an hour, perched up a ladder in the freezing cold, fixing in place a tarpaulin, that is protecting the shed roof. Storm Arwen had partially dislodged this temporary covering, but if that’s the worst the storm has done, we’ve escaped rather lightly compared to other areas of the country. 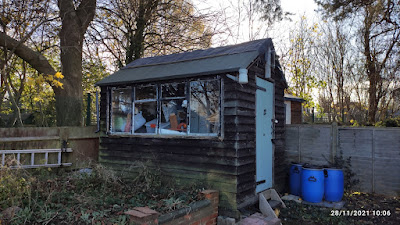 Mission accomplished, I set off following a substantial brunch, old gits bus pass in hand, to track down some Harvey’s Old Ale. You will have to wait for the next post to discover how I fared, but in the meantime, here’s a beery snippet to keep young Claude happy.

The other evening, I cracked open a bottle of Donker, a Belgian Quadrapel-style beer, with an 11% ABV. The beer is produced by Flemish brewers Kasteel Brouweij, of Vanhonsebrouck, who claim to possess the most modern brewery in Europe. I’m pretty certain there must be several other contenders for that title, but for the time being we’ll give the Belgians the benefit of the doubt and allow them their moment of glory. 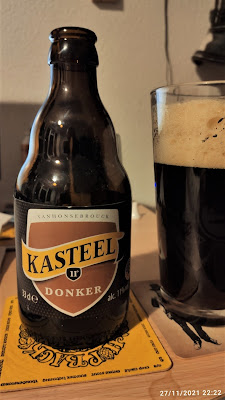 So far as I can tell, this beer came to me back in the late spring, when I was a member of FUGSCLUB – a monthly subscription beer club launched by Fuggles Beer Café as a means of seeing them, and their customers through the last, and longest of the lock-downs. I had a feeling that I’d received another Kasteel beer the previous month, and a look at my sampling history on Untappd, showed this was indeed the case.

That beer was Kasteel Nitro Noir, a 5.7% ABV Baltic Porter. Brewed at half the strength of Donker, this Nitro-Stout was in a completely different beast. My notes at the time, and taken from Untappd, described it as, “Smooth and creamy, but rather on the sweet side. Strong on chocolate flavours.”

High-octane Donker was a different beer altogether, as not only
was it rather strong for my liking, it was also sweet and quite cloying. At best it could be described as an interesting experience, but that’s about it. The bottle is showing a BBE date of January 2026, which isn’t surprising for this strong and dark coloured beer, but it does lead onto when is a beer too strong to be enjoyable, and when does strength cease to be an asset, and become more of a hindrance.

I’ve drunk other beers of similar strength, both in Belgium itself, and as imports, I’ve also, of course tried strong, mass-market, UK-brewed beers such as Carlsberg Special - "Spesh" and Gold Label Barley Wine. Neither were particularly enjoyable, and tasted more of alcohol than anything else, and the same can be said of Donker. 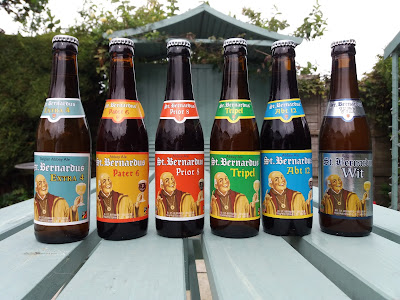 There are other strong beers though, that are much better balanced, with plenty of hops to counter both the sweetness of the malt, and the “spirit taste” of the alcohol. St Bernardus Abt 12° and Rochefort 10°, spring to mind, but I am sure there are others. The occasion and quite often the location as well, has to be right in order to fully appreciate these super-strength beers.

They are definitely beers for sipping slowly, rather than quaffing, so whilst the two monastery beers hit the spot, I’m not sure about the Donker, even if it is produced at the “most modern brewery in Europe.” I would be interested to learn what others think of such beers, so please get in touch and share your thoughts.

I'm saving my consumption of Belgian beers till I can get back to Belgium, Paul. That may be a little longer than I/we hoped !

May I just remind your esteemed readers that there is no actual legal requirement to celebrate Christmas or buy presents for anyone. In fact, NOT buying presents will not only improve your finances but help reduce carbon emissions and put a dent in the profits of the multi-national corporations everyone seems to hate.

Martin, I suppose the prospects of foreign travel resuming, depend on how this latest Covid variant turns out, although as with the flu virus, we’re never going to get away from the virus mutating. It’s what these little packages of RNA do all the time.

I agree wholeheartedly that Belgium beers taste so much better when sampled in their native habitat – something to do with the ambience of a traditional, Belgian café?

Not buying Christmas presents though, could lead to complications on the relationship/immediate family front, and whilst none of us go overboard, it is nice to treat one another, from time to time.

Whilst on that subject, I’ve always wanted to go away to a location where Christmas is not commercialised in the way it is here. Somewhere cold, bright and with plenty of snow, and somewhere with strong, seasonal Bock beers are available, ready to be enjoyed in a cosy and comfortable, centuries old inn.

Northern Bavaria (Franconia), springs to mind, but it’s not going to happen this year!!