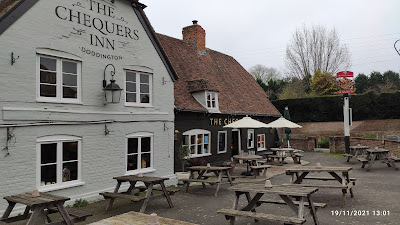 Last Friday I met up for lunch with an old friend, who I hadn't seen for quite some time. John is someone I knew during the five years I lived in Maidstone, and whilst I initially knew him through CAMRA, he was part of a group that I used to socialise with. We also played badminton on a regular basis, although the game was really just an excuse to go for a drink afterwards.

We lost touch a bit when I moved to Tonbridge, in 1985, even though several years later I had a role in a World War II period video, that John and a group of fellow enthusiasts were shooting, under the guise of the "Barmy Army Film Club." The video was one of several produced by the club, that were basically spoofs on Dad’s Army. 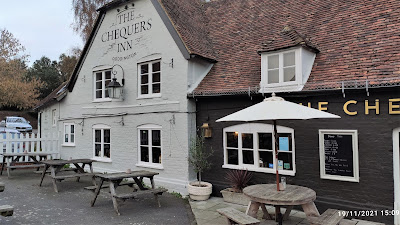 After the film premiered John and I lost touch completely. I had just
started a family, whilst he ended up travelling extensively for work, both at home as well as abroad. We caught up again, two and a half years ago, on a trip to Bamberg, back in May 2018. The trip was organised by a mutual friend from Maidstone & Mid-Kent CAMRA and provided a good opportunity to catch up over a few mugs of Bamberg’s excellent beer.

The following year we were both tied up dealing with our respective aging fathers - and then along came Covid. During lock-down John busied himself writing a short crime novel, which is how he got back in touch. I bought a copy, and enjoyed the story, which was well thought out and, like all good crime novels, had a twist in the plot. 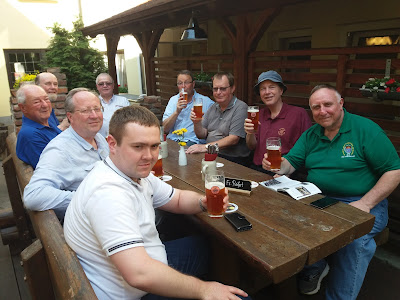 I actually read most of the book on the return train journey to Stockport, last month, and passed on a positive review to John, a week or so later. He mentioned that in his haste to post me my copy, he had forgotten to sign it. We both agreed that getting together for a catch-up, over a few drinks, and a meal, would provide the perfect excuse to get my copy signed.

We decided to meet at a location roughly halfway between our respective houses. John lives near Lympne, in the east of Kent, while my adopted hometown of Tonbridge is in the west of the county.  I chose the Chequers at Doddington, a pub at the heart of a small and quite isolated village, tucked away in an idyllic valley, on top of the North Downs. 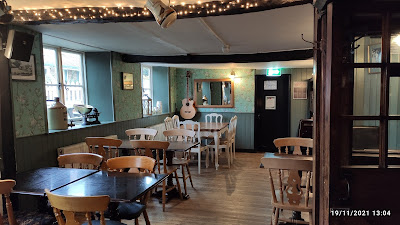 The reason for choosing the Chequers was we had driven past it last September, on our way back from a trip to Thanet. With traffic at a virtual standstill, I took the opportunity to turn off from the M2 and head south, towards the A20. The route took us through Doddington, and it was then that I caught sight of the Chequers, for probably the first time in three and a half decades.

With my friend living to the south of Canterbury, the pub seemed a good place for our planned rendezvous. I found my way to Doddington, by taking a left turn off the A20, opposite the turning into Lenham village. The road leads up across escarpment, and then to a maze of narrow roads, in an area sandwiched between the M2 and M20 motorways. One of these roads leads to Doddington. 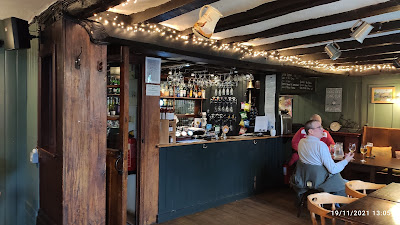 The Chequers is right in heart of village, at bottom of a hollow, and as I pulled into the car park, my friend was standing there, waiting for me. After exchanging greetings, we both agreed that it had been ages since either of us visited the pub. Thinking back, we thought it must have been during the early 1980’s, when the owning brewery, Shepherd Neame had a “passport scheme,” a clever marketing idea, which encouraged people to visit their pubs, and getting their "passport" stamped in each one.


Neither of us could remember much about the pub, apart from its obvious antiquity and status as a former coaching inn. It is said to date from the 14th Century, and with its old oak timbers and inglenook fireplace, certainly has the credentials to support this. Possibly due to soil creep over the years, the Chequers is built at a slightly lower level than the surrounding forecourt, car park and garden. This means the unwary need to take care on entering, as just behind the front door are a couple of steps down into the entrance lobby. 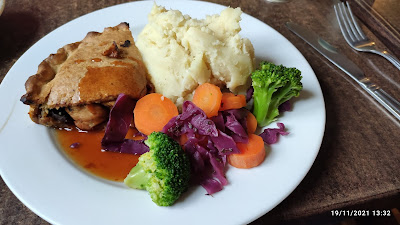 There are two bars internally, which is quite a rarity these days, although I admit to not really noticing the public bar, which leads off straight ahead, as we entered the building. Instead, we turned immediate right into saloon area and restaurant. Dogs allowed in former, but not in the restaurant.

The latter is a long low room, which felt a little chilly when we first sat down, but not for long as a member of staff soon appeared and lit the woodburning stove. There was a group of quite jovial drinkers sat by entrance, and later on a rather noisy, but well-behaved family group arrived, and sat on the table just across from us. 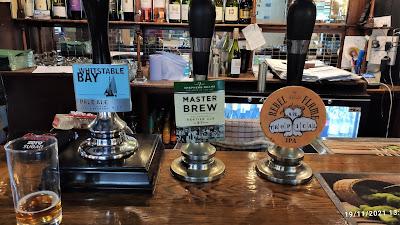 Beer-wise there was Master Brew (a beer you don’t often see these days), Whitstable Bay, plus Rebel Flame, an offering from Shep’s small-scale, experimental brewery. John opted for the later, whilst I stuck with Whitstable Bay, which is definitely one of Shep’s better beers.

As for the food, being a dedicated  “pie man,” I went for “pie of the day,” which was chicken and mushroom served with mash, mixed vegetables, and gravy. It was good, although if I wanted to be really picky, the filling could have been slightly moister. This was compensated for by plenty of gravy. My friend had ham, eggs, and chips. 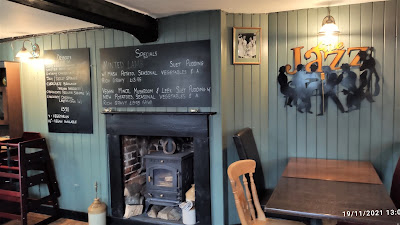 We had a brief chat, with the barmaid about trade and the pub in general, when she brought us the bill, and it was encouraging to learn that the Chequers is doing well and remains at the heart of village life. There is a large garden at the rear of the pub, and a full Post Office service is offered for a couple of hours, on Tuesday afternoons.

All in all, our visit represented a welcome return to a pub that must have been in the back of both our minds but, without a specific reason for going there, remained something of a mystery. We agreed to meet up again, in the not-too-distant future. John lives relatively close to the small town of Hythe, and is a regular drinker at the Potting Shed, a well-known micro-pub.

Given the travel opportunities offered by my recently acquired bus pass, I said I would be able to join him there for a few drinks. Sounds like a plan - as they say!

Sounds like a good day out. You failed to mention what your friends thoughts were on the Rebel Flame & I'd like to know more about Sheps experimental brewery, but I can look that up now that I know it exists. Can I get Rebel Flame in the Foresters I wonder.
Regarding your previous post, you say "I wont bore you" but that's exactly what you did. The comments "trial by sherry & a lesson in obsequiousness" about unknown persons is of no interest to me on a beer blog.
Glad you enjoyed the Larkins Porter at the Rock, I don't know how I missed you. They also have London Pride on at the moment.
I find the Harvey's Porter has the edge on the larkins but one I found at The White Hart, Trotty Velk by Pig & Porter was a bit too over the top flavour wise if that makes sense.

Pie looks good, but I do wish Shepherd Neame would stop changing their pump clip designs !

Well sorry for boring you Greengrass, but the off-beat comments that sometimes pop up on a blog (and not just mine, by the way), add extra spice, and for me are all part of life’s rich tapestry. Call them observations on the “human condition,” if you like, but the way in which people sometimes behave can be a source of never-ending fascination.

My friend enjoyed the Rebel Flame, and having been given a taste of it myself, I too thought it was alright. If truth be known, it wasn’t dissimilar to the Whitstable Bay, but being stronger by over half of one percent alcohol, I thought it wise to stick to the lower strength beer, seeing as I was driving.

Continuing this theme, and playing Devil’s advocate for a minute, wasn’t it you who castigated me for trying the unusual beers in both the Nelson and the Greyhound, rather than sticking to tries and tested beers, such as Harvey’s and Larkin’s?

Shame I missed you at the Rock, but can you shed any further light on what is happening there? It seems ludicrous for a pub like that to only be open three days a week!

The pie was good Martin, and I actually like the new design for Shepherd Neame Master Brew. As I said in the post, you rarely see their standard cask bitter on sale. It’s normally Spitfire, or even worse, Spitfire Gold, neither of which I find enjoyable, but it’s all about the “brand” these days!

By the way, Paul, Greengrass is very rude and you can write what you like on your blog; I enjoy all the personal detail and I've never thought of this as purely a "beer blog".

The other "stuff" you report on, as you make your way around the country, whether it's music, food, street art, family happenings or even problems with encroaching tree roots, are of equal interest, and keep me and your myriad of other readers engaged and, at times, even amused.

As I may have mentioned before, I'm still not sure of Greengrass's identity, although he seems to know mine. From his recent comments, it looks like our paths nearly crossed at the Rock, the other week.

There's another individual where the same applies. He goes under the name of Higgs Bosun, or Anonymous Matt, but I've yet to meet him in the flesh. In the past he has made a point of winding up the local CAMRA branch - in the same vein as Cooking Lager, but seemingly without the humorous intent behind Cookie's teasing.

Despite the above, I would be quite happy to share pint with either of these individuals, just to prove there's no ill-feeling, or bad intent on my part.