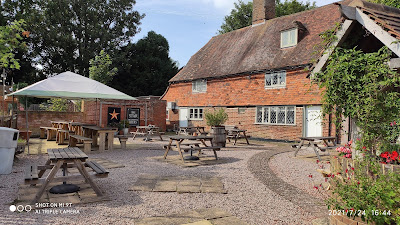 Over the course of almost five decades of pub going, it’s sometimes hard to remember whether or not you have been in a particular pub. Furthermore, if a previous visit occurred several decades ago, then it’s nigh on impossible to remember, especially if the pub in question wasn’t that memorable in the first place.

Whilst that final point does not apply to the Star at Matfield, was still racking my brains to try and recall
whether or not I’d set foot in the place. I must have driven past the pub dozens of times, these passed 30 years, and walked by quite a few times as well, but until Saturday’s visit settled the matter, I could not say for certain, one way or the other. 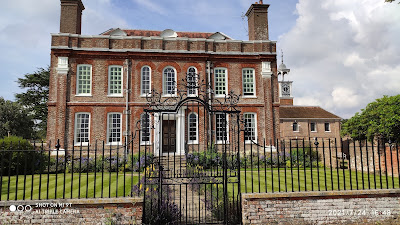 Matfield is a small and rather attractive village, approximately five miles southeast of Tunbridge Wells, and two miles south of Paddock Wood. The village grew up around its extensive green, which I’ve just learned is the largest in Kent. Today it still acts as the centre and focal point of this picturesque Wealden village.

There is a large pond, at the northern end of the green, and is overlooked by the grade I listed, Matfield House. 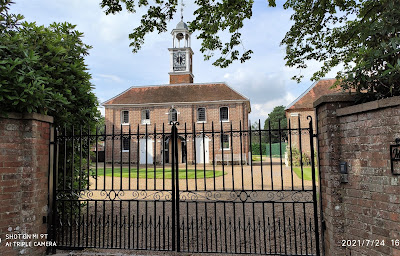 The latter is an attractive Queen Anne style house, built in 1728 for a local yeoman farmer. The adjoining stable block is also grade II listed and is topped by an impressive looking clock turret.

The Star is situated on the northern edge of the green and is now the only pub that looks over it.  Until a few years ago, the Wheelwrights Arms performed the same role, from the opposite end, but in 2017, called “Last Orders” for the final time, and the property is now a private house. Local villagers launched a campaign to keep it open, but this was ultimately unsuccessful. 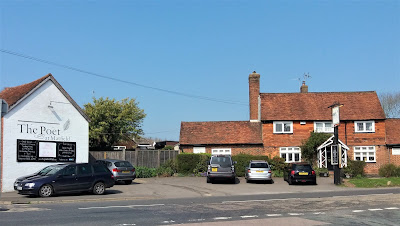 It is also worth mentioning Matfield’s
other pub – The Poet, which lies a bit further down the road towards Paddock Wood, opposite the turning to Brenchley. The Poet is perhaps more of a restaurant, than a pub, but it was once a traditional village local, known as Standing’s Cross.

As Matthew and I drove through the village, following our visit to the Star, we noticed somewhat ironically, that the Poet’s former name has been adopted by a new housing development. I suppose "Standing’s Cross" makes a change from the rustically inspired, but totally predictable titles, such as lark rise, orchard close etc., that developers normally come up with. 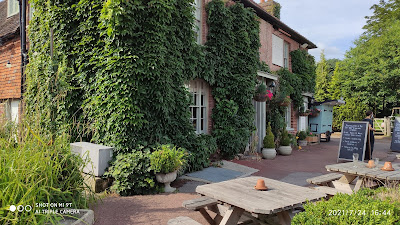 w for the pub itself. The Star is a solid-looking, brick-built pub, creeper-hung, particularly at one corner, and with a portico entrance. When we arrived, there were a few sitting outside at tables, lined up in front of the building. There is a patio area to left, and a children’s play area to right, just in front of the car park. 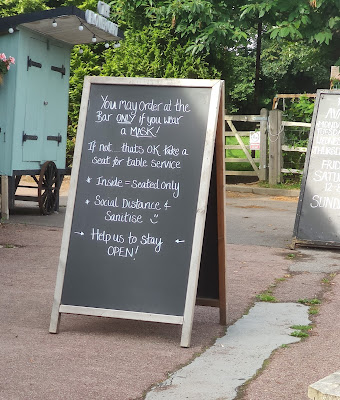 A notice next to the entrance, advised that ordering at the bar was possible, providing masks were worn. Alternatively, patrons could sit outside, for table service, if they preferred to remain unmasked. Given the current high infection rates for Covid-19 this, in my view, was a sensible policy. In addition, there was to be no standing at bar, but the Star didn’t really seem the type of pub that encouraged barflies, anyway.

Matthew and I donned our masks, primarily to have a look inside, but also to see what beers were on. Upon entering, I realised that I had been in Star before, although probably only once, and quite a few years ago. I noted there are seating areas either side of bar, plus a dining room-restaurant, leading off to rear.

I was too busy chatting to the barmaid and paying for our drinks – Harvey’s Sussex Best for me, plus a pint of Amstel for Matthew, to take a photo of the bar itself, but a beer from Tonbridge Brewery, was the other cask offering. There were no customers inside though, as all were outdoors, taking advantage of improvement in weather. 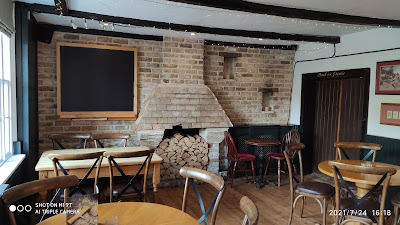 We went back out and joined them, sitting at one of the tables in front of the pub. My pint of Harvey’s was well-conditioned, cool, and refreshing. I expect Matthew thought the same about his pint of Amstel! There were a few comings and goings, and the food we witnessed being brought out, looked very appetizing. The staff too were pleasant and attentive, making us feel really glad that we called in. 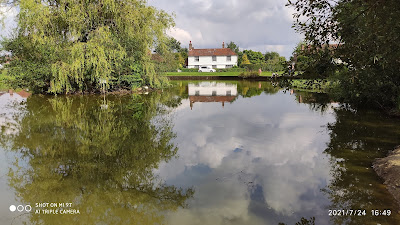 So why did we call in? and why
choose the Star? The answer is we had made a further trip to the Waste Transfer Station (WTS) and fancied a pint on the way home. I was going to suggest the Dovecote, at Capel, but according to WhatPub, it closes between 3pm and 6pm, even on Saturdays, so a bit of quick thinking led to the choice of the Star. 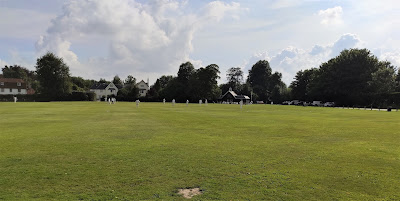 After our visit, we took a wander over to the village green, where a game of cricket was in full swing. There were also groups of children and their parents, attempting to catch tiddlers, from the pond with fishing nets. Along with the attractive houses, fronting onto the green, these scenes formed the perfect picture of an English summer’s day; a day made all the more perfect by a well-kept pint of traditional cask beer at an equally traditional village pub.
Posted by Paul Bailey at 22:34

Well, if the pub chooses to maintain the previous regime of restrictions, I would take my business elsewhere.

I think you are being a little unfair on the pub, Mudge. There was no requirement to pre-book, or to give contact details.

Many local pubs are operating similar "halfway house" regimes, at the moment, primarily to protect bar staff, many of whom are young, and will only just have been vaccinated. Many customers still feel vulnerable, despite having received both doses of vaccine. Having experienced a period of intubation, whilst in ICU, my wife is one of them.

Surely it is preferable to open up slowly, and gradually remove remaining restrictions, however annoying they might seem. Once people start to feel comfortable again, they will no longer be required. Some pubs, of course, have done away with them completely, and I imagine these will be outlets where people are behaving responsibly and with respect towards bar staff and other customers.

Contrast this to the moronic behaviour of some of the so-called football "fans." There have been several examples of local pubs being forced to close, due to Covid outbreaks that are almost certainly the result of large groups of supporters, crowded together, to watch the Euro 2020 matches.

Let's keep an element of common sense, alongside one of proportion, as the last thing any of us want to see is pubs being forced to close, and the re-imposition of lock-down restrictions.

The other week I took Simon (BRAPA) round 4 pubs on the Suffolk/Essex/Cambs border, only 20 miles from Cambridge, and had no recollection of any of them. Comes to us all.

Martin, I would imagine that your in-laws will know the village, and possibly even the pub. Matfield is often lumped together with neighbouring Brenchley – the location of the legendary Halfway House, (even though it’s a mile or so to the southeast of the village).

Believe it or not, there are still places in Kent that I’ve never come across before, particularly in the east of the county.