A beer for sharing? 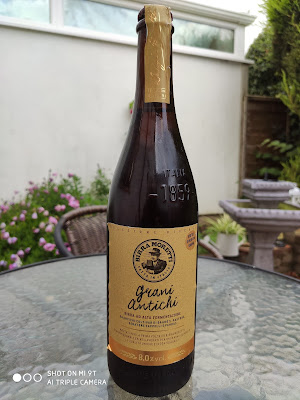 A beer for sharing, according to the label, and with an abv of 8.0%, and a bottle size of 750ml, that’s wise advice. A wine sized bottle of strong beer probably shouldn’t be drank alone; at least not in one session. I can’t even remember where I picked this one up, although I’m guessing either Tesco or Waitrose, but Birra Moretti Grani Antichi, obviously caught my interest, and was probably on special offer. Grani Antichi is a full bodied, amber-coloured beer with a rich malty base. Because of its strength, the alcohol comes across in the taste, and whilst not dominating the underlying toffee-maltiness, is an ever-present factor in the make up of the beer. My Italian isn’t up to much, but even without Google Translate, “Birra ad alta fermentazione,” indicates to me that this is a "top-fermented," ale-style beer. It certainly tastes like one!

So, with its rich maltiness and high alcoholic strength, this is definitely a sharing beer, which is why with only me drinking it, I re-capped the bottle after consuming roughly half the contents and enjoyed the beer over a two-day period. If anything, the beer tasted better on the second day, possibly because it had been exposed to oxygen in the air for 24 hours. It works with wine, so why not beer? 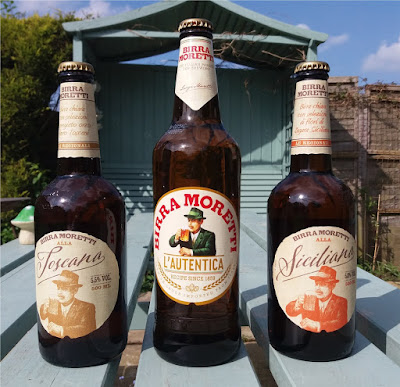 Birra Moretti started out as a family-owned Italian brewery but are now part of the multi-national Heineken group. Birra Moretti is an instantly recognisable brand of course, thanks to the image of the moustached man in the hat, enjoying a tankard of the company's beer. The main brand, Birra Moretti – L’Autentica 4.6%.  has been available in Britain for some time and is still brewed to the recipe that was created by founder, Luigi Moretti. It is a smooth, full bodied beer, brewed with a blend of high-quality hops, to create a satisfying beer with a full malt base, balanced by some delicate citrus notes. In short, it is an easy-drinking, light-lager style, “quaffing beer”, and one which I am not at all averse to enjoying from time to time.

Until quite recently, Italy was not known as a beer drinking nation, mainly because the country produces some excellent wines, which Italians tend to prefer to beer. Prior to the advent of the now flourishing “craft beer” scene, Italian beer was almost exclusively of the light lager type. 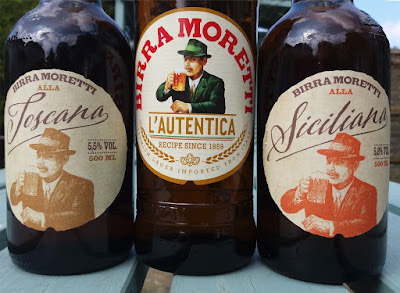 A few years ago, a couple of beers inspired by the culinary traditions of Italy’s many regions found their way into the UK market. I tried two of them, Alla Toscana 5.5%. and Alla Siciliana 5.8%, from Tuscany and Sicily of course. They were pleasant enough beers, and I reviewed them here, but as I said at the time, with no real tradition of beer brewing, particularly in southern Italy, these “regional” Moretti beers were all contrived. Nevertheless, they represented an attempt to move away from the easy-drinking, light-lager style normally associated with the country. As for Birra Moretti Grani Antichi, I am not sure of its provenance, its background or the marketing behind it, especially here in the UK.

I sometimes enjoy a small glass of old ale or barley wine, particularly during spells of cold weather, but a beer of this strength, served up in a wine-size bottle, just didn’t seem right. There is nothing wrong with the formulation of this beer, or the way it has been brewed, but If truth be known, I found it far too strong, cloying in taste and lacking the refreshing qualities normally associated with beer, although there might be others who will rave over it.

You omit to say that the authentic one is now brewed in Manchester!

It does seem perverse that many "craft" breweries put beers of quaffing strength in 330ml bottles, but very strong ones in bottles that are more than one person wants to drink at once.

TM, Heineken seem very cagey about where Moretti is brewed. I did find a reference to L'Autentica being brewed in the UK, but nothing more specific than that.

Mudge, it does seem rather perverse, and I discovered that in November 2019, anti-drink group Alcohol Change UK, brought a case against Heineken. Fortunately, the Portman Group dismissed the claim, stating the company had made it abundantly clear that this was a beer for sharing, and not one to be consumed by one person, at a single sitting!

Paul Heineken have three breweries in the UK. We can safely disregard Caledonian in Edinburgh as it is an ale only brewery. John Smith can brew lager, but mainly doesn't. The Royal Brewery in Manchester is a dedicated (more or less) lager plant so......

Unless they have contracted it out and why would they? All ads and bottles now say brewed in the UK.

TM, wasn't the Royal Brewery the former Harp Lager plant, for those of us old enough to remember such abominations?

Stays sharp to the bottom of the glass!!