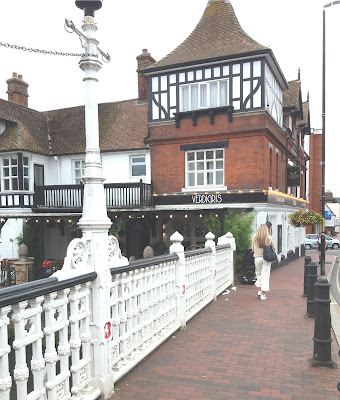 Just a short post to push June’s total towards double figures. The sixth month of the year has been slightly leaner than the preceding months. I’m not quite sure why, but looking back I sort of ran out of steam halfway through the month.

With pubs still not open (not yet, anyway), and virtually all social life still on hold, it’s perhaps not surprising that June has been on the quiet side, but that could possibly change as pubs, bars and restaurants slowly come back to life, from next Saturday onwards.

Barbers too will be allowed to reopen, but despite allowing my hair to grow to the longest it’s been for the past 30 years, I shan’t be rushing back for a trim. Mrs PBT’s says longer hair suits me, and some of the women at work have said the same thing. These particular colleagues have just returned from furlough after a period of several weeks, so my unkempt look must have come as something of a shock, but they added that my long hair makes me look younger! There’s nothing like a bit of flattery and this has now confirmed that my new look is here to stay, for a while at least. 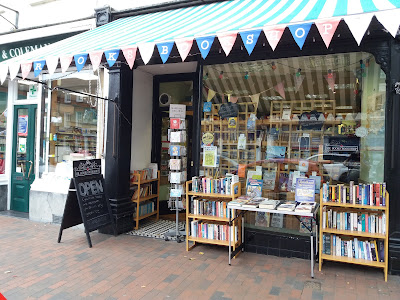 Whilst on the subject of reopening, the Tonbridge branch of the hardware chain, where son Matthew works, opens its doors to the public today, for the first time since 20th March. He was in the store last week, with a few of his colleagues, getting the place safe, compliant and ready to admit shoppers. Although slightly apprehensive, I think deep down he’s looking forward to it.  The company has installed the now familiar Perspex safety screens around the tills, along with appropriate one-way walking and distance markings, so things should be OK.

Mrs PBT’s continues to work mainly from home, although she does spend a day at the local scaffolding company where she’s been employed these past 10 years or so.  With Matthew back at work though, she’s lost her chauffeur and will have to rely on taxis to get her to and from the company’s remote location on the edge of Tonbridge. 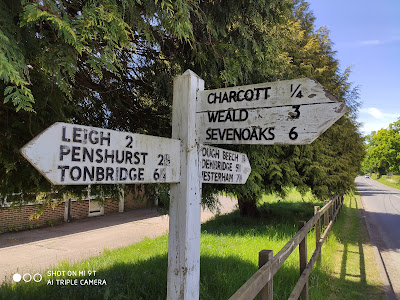 e, I’m still soldiering on at the dental products company I’ve been at these past 14 years. Orders remain slow, as despite dental surgeries being allowed to reopen, the Covid-resistant working practices imposed by Public Health England, have meant dentists are only seeing around a third of their normal patients.

Despite the lull in my niche, I have noticed a significant increase in traffic volumes these past couple of weeks, and this morning’s drive to work seemed almost on a par with those one would expect during the school holidays.

The lad and I took a stroll down to the town yesterday. I had a few bits and pieces to pick up, as well as some pre-ordered draught beer to collect from the Nelson Arms. One thing I have really missed during lock-down is a decent cup of coffee, and whilst our local Starbucks is now doing takeaways, I’d much rather support an independent local trader. 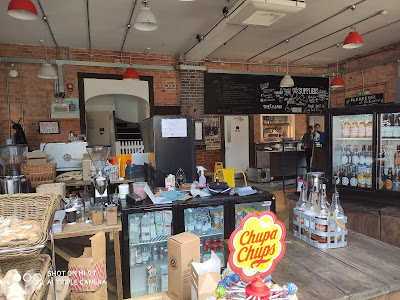 With the thought of a proper cup of coffee in mind I was delighted to see an “A” board advertising that TOFS (Tonbridge Old Fire Station) was open for take-outs. Quickening our pace, we headed off in that direction and found TOFS had two areas both fronting onto the pavement, offering various goodies to passers-by. One counter offered cocktails and the other coffee, bottled beer and cider.

Although tempted by a beer, I was even keener to secure a cup of coffee, so after purchasing a takeaway cappuccino (complete with chocolate sprinkles ), we set off towards Tonbridge Sportsground to find a place to sit and enjoy it. A bench, overlooking the river, proved the ideal spot, as we watched the local canoeists struggle to navigate along one of the narrower channels. 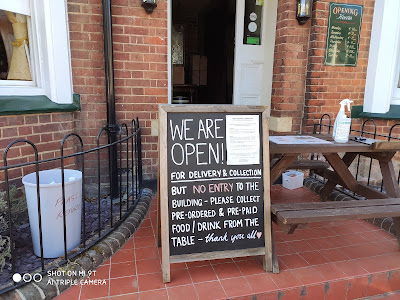 I have to say my coffee was rather good – Matthew isn’t a coffee fan, so he didn’t quite appreciate my enthusiasm. After finishing my drink, we made our way across the Sportsground to the Nelson, where our pre-ordered and pre-paid beer was waiting for us. After we’d rang the doorbell, landlord Matt appeared with our order – Goacher’s Gold Star for me and Hacker Pschorr Münchener Helles for the boy.

We stopped for a brief chat with plans for the pub’s imminent reopening featuring high on the agenda. If truth be known Matt seemed a little apprehensive, but I suppose much is a stake. He has sectioned off certain areas inside the pub and will only have fou 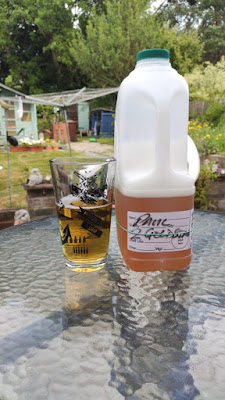 r tables for drinkers. I didn’t ask him about the food side of the business, but from what he said, the Nelson will be concentrating on the garden/outdoor side of the trade for the immediate future.

We walked home, pleased to have clocked up a distance of four miles. Our respective beers went well with roast pork dinner that Mrs PBT’s had cooked, so that was a good way to off the afternoon. I did a stint in the garden afterwards, before making up my sandwiches ready for work this morning.

So, the routine of work interspersed by short interludes of domesticity continues.  It’s rather like living in limbo, and no-one’s really sure quite where we go from here.  This applies both nationally and internationally, but one way or another we will get through this present crisis and gradually return to some semblance of normality. We just have to be patient!