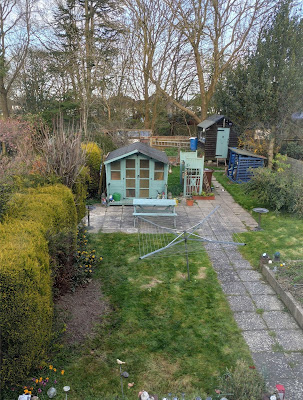 My exercise today has been in the garden and consisted of chopping up a large pile of cuttings from an out of control shrub that I cut down a few weeks ago. I also mowed the grass – its first cut this year, but even with the blades on the highest setting the mower kept clogging up. The reality is I should have performed this task a couple of weeks ago, but wait, didn’t we have all that rain back then?

Grass clippings, and chopped up shrub cuttings, mean my “brown” bin is now three-quarters full. This is the bin I bought specially from the council for disposing of garden waste that is difficult to compost, only to discover that just when this service is coming into its own, the local authority has suspended it.

Understandable under the circumstances, as I’m sure there are far more pressing matters for our local council to deal with during this crisis, but rather frustrating all the same. As far as my step count is concerned, I’ve only just hit the 2,750 mark, but steps aren’t everything, and despite the chill wind that was blowing, (it’s going to get even colder tomorrow), it was good to be out in the fresh air. 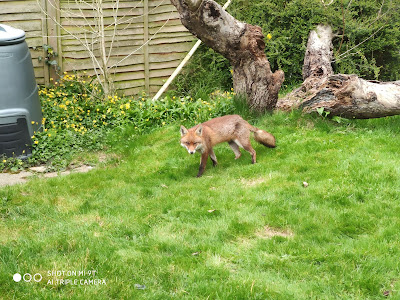 However, this post isn’t one about how virtuous, or otherwise I’ve been, instead it’s about a little visitor who appeared just as I was tidying things away. Out of the corner of my eye, I noticed a small and quite skinny looking fox slowly creeping into view.

The sight of a fox is not that uncommon, as our garden backs on to a small wooded area that acts as a “nature area” for the local primary school, but normally we only see them from the kitchen window, and not whilst we actually out in the garden ourselves.

My first instinct was to reach into my coat pocket and grab my phone, as I wanted to photograph the little fella, but as I snapped away with the odd zoom shot, it became obvious that this fox was no shy and retiring violet, but rather a bold one. He, and here I’m assuming it was a male, continued his approach to within a few feet of me. 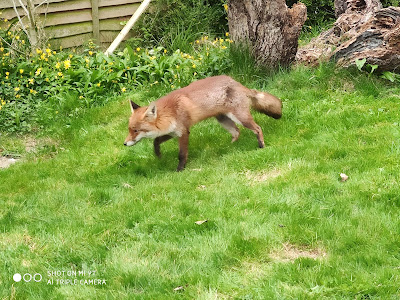 It was then that I realised the poor creature was hungry, so without making my movements too obvious, I made my way back to the house and tapped on the window to attract Mrs PBT’s attention. She opened the back door, whilst I explained what I’d seen, and hurriedly found a metal pet food bowl, kept from our dog-sitting days.

She grabbed a couple of Weetabix and crumbled them up in the bowl with some water, for me to take back up the garden for our little visitor. I thought Mr Fox might like something extra to go with his cereal, so I added the remains of my Cuppa Soup to the dish, placed it on the ground, before retreating back towards the house. 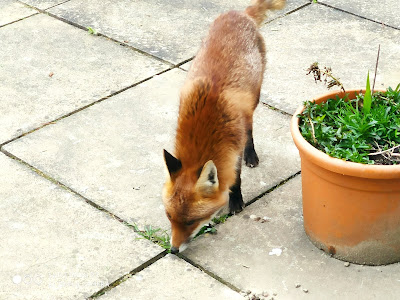 Sure enough our foxy friend approached the dish, and after a cautious sniff or two, got stuck in. Later, we found a tin of dog food, again a hangover from looking after my sister-in-law’s dog, so we gave the little chap, a helping of that, and I’m sure he found it a better choice than the Weetabix.

Mrs PBT’s was keen to share my photos of our visitor, on social media, particularly as she wanted to alert occupants of neighbouring properties that there was a hungry fox on the prowl. I agreed to post them on my Facebook page, even though I’ve been ignoring social media as much as possible these past few weeks.

The response was quite surprising, as apart from those liking the cute photos of our furry friend, there were quite a few from people we know in the immediate vicinity. One, from a neighbour down the road, informed us that he had been feeding the fox for the past several nights, but hadn’t seen it for a few days.

It would appear that the Fantastic Mr Fox, likes to do the rounds and pick and choose which locations he dines at. Now that is a little light-hearted story to help cheer us through these dark days, and one to restore one’s faith in the kindliness of others.

Brilliant. He looks lovely. Never seen one so tame. Seen a couple of muntjacs recently too. Nature is reclaiming the planet!

I've never seen a fox as tame as that one, He really brightened up my day,

Nature certainly is reclaiming the planet!

My late father, when elderly, befriended a fox and used to feed him.

When he died, the fox howled around the neighbourhood for days.

It's a mystery how the fox knew - my father had been confined to bed for some weeks.

Thanks for sharing the story about your father, Etu. Many animals have a sixth sense about such matters. Dogs, for example, often know when something is wrong, and I imagine that coming from the same family, foxes are pretty much the same.

We haven't seen the little fella today, despite leaving some food out for him, so I imagine he must be dining elsewhere this evening.

Great posts Paul - keep them coming. Good to see locals pubs and breweries getting into deliveries.