Shifnal shines through - despite the rain! 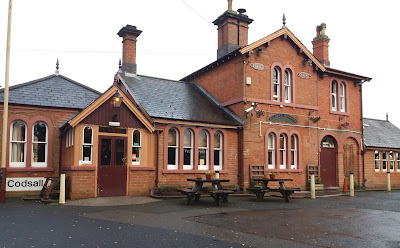 I survived yesterday’s encounter with the “Real Pub Men,” and thoroughly enjoyed my tour around the pubs of Shifnal, Shropshire. This was my first trip to the county since a canal boat holiday, back in the mid-1980’s, so a return visit was long over-due.

Looking at the map, Shifnal is not that far inside Shropshire, and just a short train ride away from Wolverhampton and the West Midlands conurbation, but to me it was somewhere different, somewhere I hadn’t been to before and the chance to enjoy beers which we rarely, if ever, see in this corner of the country. It was also the opportunity to visit a few “proper” pubs, in the company of a group of like-minded individuals. 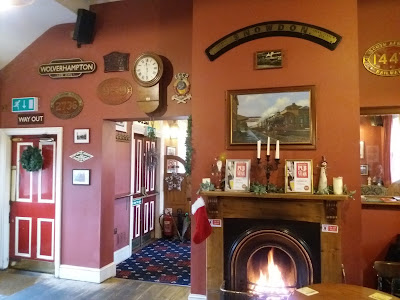 I don’t intend to write a piece about all eight pubs we visited, as I expect either Pub Curmudgeon or Retired Martin will do that. Possibly they both will in their own inimitable way, so what I want to do, certainly in this introductory post, is to list out a few highlights.

First on the list is the Codsall Station Bar. This is situated at Codsall station, a few stops back down the line towards Wolverhampton, and that was our official meeting point. It was also the location of my first beer of the day, although I later learned that several of the group had started drinking earlier, and had visited a couple of other nearby establishments. 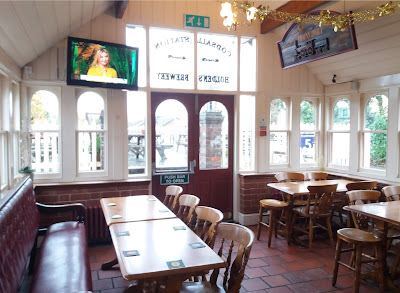 This unique pub is situated right on the platform occupies the original station building. The latter is a handsome, brick-built Victorian building, with several interconnecting rooms. There is also a conservatory, right at the far end, where customers can sit and watch the trains arriving and departing.

The pub is owned by Holden’s Brewery, and offers a selection of their own fine, Black Country Ales, plus the odd  guest beer. Holden’s are a family-owned brewery, based in Dudley, West Midlands and have been brewing for 104 years. They own around 20 pubs, most of which are located fairly close to the brewery. 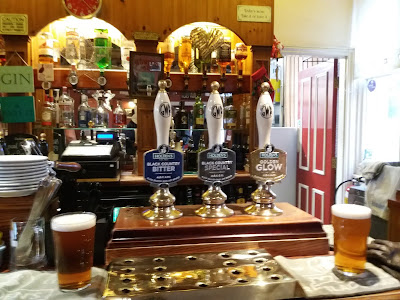 Our meet-up at Codsall Station provided me with the perfect opportunity to renew my acquaintance with Holden’s beers, and am pleased to confirm majority were in fine fettle. I particularly enjoyed the Black Country Mild, along with the equally named Black Country Bitter, although the Special left a little to be desired.

I found the roaring open fire, in the main room – opposite the bar, very welcoming, along with the stack of pre-prepared rolls, known locally as "cobs," stacked by the side of the bar, under a protective hood. 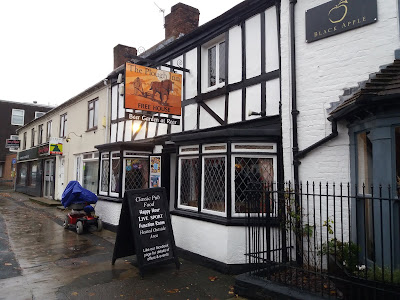 Although tempted, I managed to resist, knowing we’d be stopping for lunch at one of the pubs in Shifnal, so after finishing our beers, we walked round to the platform, ready to board the 12.42 train to Shifnal. Unfortunately the rain had set in by the time we arrived, and as the day progressed, the damp conditions steadily got worse. We visited seven pubs in the town, and the following ones stand out for a variety of reasons. One though, is worthy of a mention, if only for the wrong ones! First the good ones. 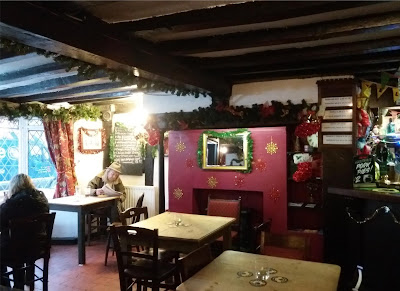 The Plough was the second pub on our Shifnal itinerary and also our intended lunchtime stop. Its half-timbered frontage is appropriate to its heritage, as according to WhatPub, the Plough’s origins date back to the 17th Century. The pub is longer than it is wide, and prides itself on keeping up to eight cask ales on tap. This is possibly too many, and certainly during the duration of our visit, there seemed far more pints of San Miguel being ordered than pints of cask. 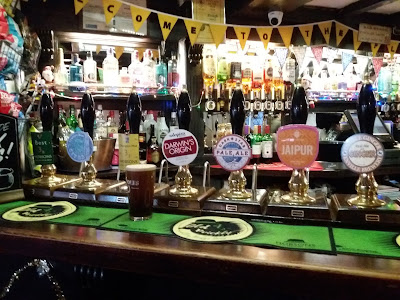 Having said that, my pint of Hobson’s Champion Mild was on top form and worthy of 3.5 NBSS. Also on top form was the fish & chips, which four of us chose from the menu board. Even if this dish hadn’t been on offer at two for £15, it would have represented excellent value, with a good size piece of battered cod, chunky chips and mushy peas. What really sold it to me was the accompanying slice of bread and butter; talk about real comfort food!
The Wheatsheaf is on the opposite side of the road, and was the fourth pub we called in at. It’s a lengthy, three room pub with a welcoming fire, blazing away; a feature which was very welcome yesterday, given the damp and rather cold conditions outside. 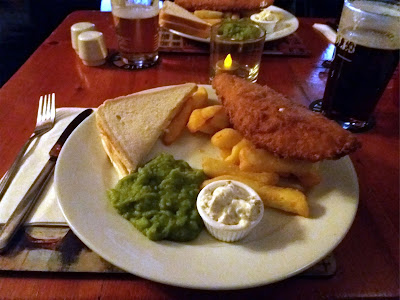 The Wheatsheaf is listed on CAMRA’s National Inventory as a historic pub, with an interior of some regional importance. There are certainly plenty of old beams to support this, and along with the flagstone floors and the intricately patterned 1930s fireplace, in the public bar, it came across as the most genuinely historic pub of the whole trip.

The beers were from the Marston’s/Banks stable, noticeably Banks Mild and Bitter, but also Wainwright (now a Marston’s brand), plus Courage Director’s. The latter was a surprise find, but most of us opted for one of the two Banks beers. 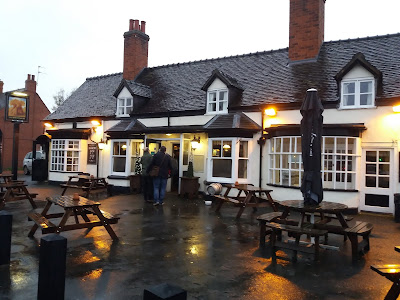 The next pub was a disappointment, particularly as the potential was there for it to be excellent. The Crown has recently been refurbished by Wood's Brewery, who  appear to have been spent a significant amount of money on it. Strangely, the pub isn’t listed on Wood’s website, as belonging to the brewery.
The interior has a very contemporary feel to it, with a central bar surrounded by four rooms. When we first entered we thought a band was performing, such was the level and the quality of
the sound emanating from within, but we soon realised that this was just a sound system with the volume set way too high. The system was obviously of high spec, such was the quality of the sound reproduction, but played at such a level as to intrude into every part of the pub. 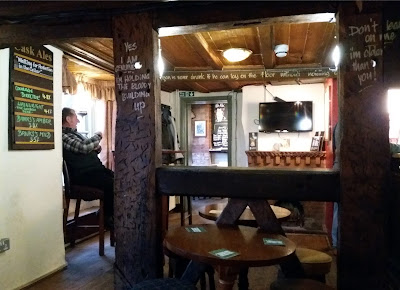 As it was, we made our way to the room behind the bar, where the sound levels were fractionally lower, but they were still excessive – certainly for a practically empty pub. And there lie the rub, as apart from our party of five, there were only three other customers. Two of these were sat drinking at the bar, laughing and joking with the barman, and we had the impression they were the people responsible for the appalling choice of music IMO, and for the excessive volume it was being played at. 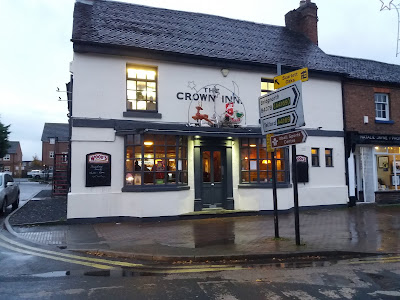 The sad thing was the beers were all in excellent  condition, despite being a little expensive for the area, so what is it that drives pub managers to act in a way guaranteed to drive away custom?

This aside, the other six Shifnal  pubs we visited were all good in their own way, and apart from the Crown, were all trading quite nicely, with a wide age range and mix  of customers; certainly for a cold and damp, late November afternoon.

I had a thoroughly enjoyable day, sharing the experiences outlined above, with the excellent company of the “Real Pub Men” and look forward to participating in future, “Proper Days Out.”

Footnote: I have changed the title to something more appropriate. "Shifty" wasn't the correct adjective to be using when writing about the town.
Posted by Paul Bailey at 22:37

It was nice to meet you Paul and glad you enjoyed the day out. I always think there's something about a grey, drizzly day that makes pubs seem so much more welcoming...even the 'loud' ones!
I'll also be writing it up (in a week or two!) on my blog Pubs Then and Now.

Thanks Pete, it was good to meet you, too last Friday. I agree that the weather did make those Shifnal pubs appear more welcoming; although I have to say we were warmly received in all the pubs, apart from perhaps the Crown.

Looking forward to reading your write up on the trip, when it appears on your blog. In the meantime have placed a link to Pubs Then and Now, on mine. Cheers.

A top read Paul and seems to tally with the other boys blogs in terms of good and bad boozers.
It's definitely cobs in the Midlands ��