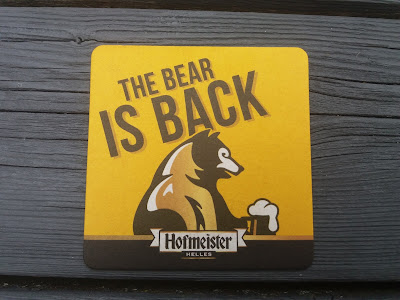 It was son Matthew's birthday a couple of weeks ago, and along with the usual presents bought for a twenty-something lad, we thought we'd get him a case of beer.  Rather than the usual case of Stella though I wanted something better for him; something a little bit special, and something he could really enjoy, so what better than a beer he has taken quite a lot of interest in over the past year or so?

I'm talking about a beer which launched in the early 1980's, and which was promoted as having a German heritage. Despite having a Teutonic-sounding name, Hofmeister was brewed in the UK by Courage, (later Scottish Courage). It was pretty weak stuff as well, with an ABV of just 3.2% , but this was not uncommon for British lagers at the time. 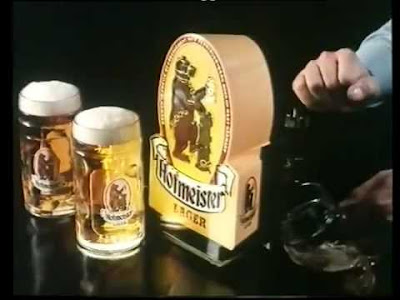 Hofmeister was promoted with the help of a bear; a fake one of course, and one which having started life as a rather cuddly and slightly bumbling bear, morphed into a cheeky-chappy, Jack-the-lad sort of bear, whose name was revealed as George. George wore a shiny, yellow jacket and a pork pie hat

The brand was marketed with the slogan "For great lager, follow the Bear"; a  strap-line which appeared in both TV commercials as well as on billboards. Like many of these beers with a fake continental pedigree, the adverts were better than the beer itself.

After a slow, but inevitable decline, the brand was finally killed off in 2007, which was shortly after Scottish Courage had been acquired by Heineken. And there the brand might have remained, confined to the dustbin of history, until in 2016, when a small group of beer enthusiasts acquired the rights to Hofmeister from Heineken.

The re-vamped beer re-launched in October 2016 with new branding, a revised recipe and a genuine German pedigree. The new Hofmeister Helles Lager is a vast improvement on its 80’s namesake, and is brewed at a brewery in the heart of Bavaria, by a 4th generation family brewery.

It is brewed according to the Reinheitsgebot German beer purity law, using natural mineral water and locally grown barley and hops. The beer is lagered at a temperature close to zero degrees, for a fresh, crisp, award winning Helles lager with an ABV of 5%. It is light golden blonde in colour, with low carbonation and is imported from Bavaria for sale in the U.K.

Matthew is too young to remember the original Hofmeister, but I am not, and after trying the beer for myself, pronounced it genuinely Bavarian, eminently drinkable and a far cry from the "ersatz" lager I remember from the early 1980’s. After both trying the beer for the first time (last year, at the Greyhound Charcott), decided to track down some Hofmeister to enjoy at home. 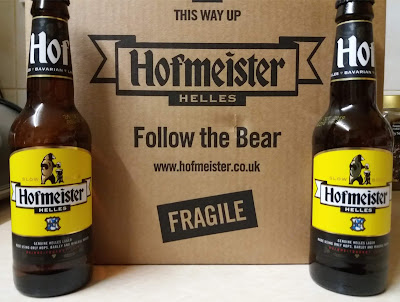 The company behind the re-launched beer claim they are on a mission to bring back this iconic brand to an appreciative public, and asks devotees to follow their journey online and keep an eye out for Hofmeister coming soon to a pub near you.

Despite these laudable aims, Hofmeister is still hard to come by, particularly in packaged form (bottles). A growing number of pubs keep it on draught, but in bottled form Hofmeister seems as rare as hen's teeth.

This was where I did my super-sleuth bit by becoming involved with the search for bottled Hofmeister, but an online scan of all the major supermarkets (including both Aldi & Lidl), yielded no results. A Google search did show though that the beer was available from Amazon, but priced at £23.99 for a dozen bottles, it was a little on the pricey side. I was prepared to pay this for a birthday gift, until I noticed the £7.50 delivery charge,  and for me this was a red line. 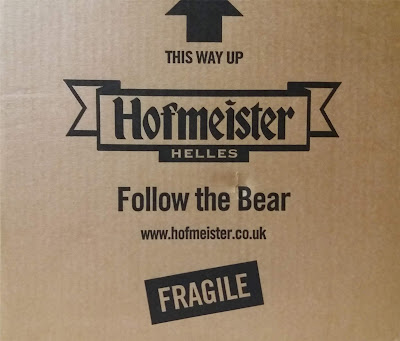 I continued my quest, this time trying independent off-licences, and I thought I'd struck lucky with Oddbins, after a chance enquiry whilst en route to a CAMRA meeting in Tunbridge Wells. I discovered that Hofmeister is a beer stocked by the chain, and whilst the local store was out of stock, they would be able to order some for me.

I left the manager my card, and he promised to call me the on the following Thursday, when the beer was due in; although he did say he couldn't guarantee the stock would arrive. The Thursday in question came and went and of course, there was no phone call.

The phone call which is never made or never returned, has to be the number one let down of the 21st Century and the one thing guaranteed to piss more people off in life than anything else. Garages are the worst in my experience. How many times have you taken your vehicle in for a service or repair, and the service manager says they will phone you when the car is ready for collection?

How many times are they true to their word or, more to the point, how many times have you been left feeling let down? Most of us are resigned to this being just another sad fact of life, and I am no exception, but the following day I picked up the phone and called Tunbridge Wells Oddbins. 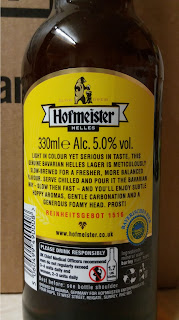 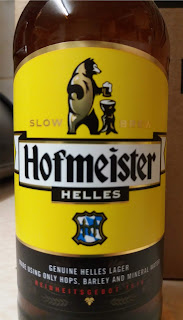 The manager remembered me, although there was no apology for not having called me, but the fact was the beer had not been delivered to Oddbins' central warehouse, so hence none had been despatched to the various stores. He then quoted me chapter and verse as to how this wasn't uncommon in the drinks industry. I enquired whether the beer might be available at a later date, but the manager told me he simply didn't know, and these best thing I could do was to try elsewhere.

This is where a work colleague came to the rescue. My workmate had overheard my conversation and decided to check whether his Amazon Prime account would qualify for free delivery. As it was Black Friday, there was no delivery charge payable, so the order was placed for delivery to Bailey Towers.

The beer was duly delivered a couple of days ago, much to Matthew's delight, although he hasn't given his old dad a bottle yet. But the mystery remains as to why such an obviously good product is not more widely available.

In the meantime, "For great lager, why not follow the Bear?".
Posted by Paul Bailey at 21:03

"Harp. Stay sharp. To the bottom of the glarp".

"Refreshes the parts other beers cannot reach". "Probably the best lager in the world". "I bet he drinks Carling Black Label". "Well you wouldn't want a warm one?"

I could go on, but will spare you any more late 20th Century, "lager-related horrors"!

"Like many of these beers with a fake continental pedigree, the adverts were better than the beer itself."

Although, from what I hear, most 'imported' beers are never as popular back where they came from for some reason (i.e. Stella, Fosters, etc.). :)

"The phone call which is never made or never returned, has to be the number one let down of the 21st Century"

I'd add an expected reply to a text that never happens is a close second. :)

"As it was Black Friday, there was no delivery charge payable,"

Prime does have its uses. No good for me, being on an island, as they even state they can't guarantee delivery in the timeframe of prime. And when shipping to my dear old Mom, she's so close to one of their warehouses it seems that it gets there in two days even when I opt for the slower free shipping route. :)

"But the mystery remains as to why such an obviously good product is not more widely available."

I'd say partly because they're still a young company and haven't worked out all the kinks with regards to production and shipping yet.

Russ, the re-vamped beer launched over a year ago, so I would have expected the company to have sorted out their distribution chain by now. I accept they may have wanted to test the water, but if they're still having problems in getting the brand in the shops, they run the danger of losing the good will they must have built up as a result of the launch.

Hofmeister Helles wouldn't be the first new product to flounder as a result of a poor, or non-existent distribution chain.

I must admit I was surprised to discover that Amazon sell beer. They seem intent on getting their fingers in as many pies as possible. I would much preferred to have used an independent wholesaler, had one been available.

"I must admit I was surprised to discover that Amazon sell beer."

I still like them for books but not keen on other things through them. :)