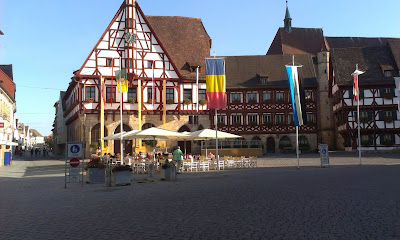 On the Sunday, which was the first full day of our stay in Bamberg, our party visited the town of Forchheim. This small Franconian town lies to the south of Bamberg and is approximately 15 minutes away by rail.

For the majority of the group, this was their first visit to a town which boasts four breweries, but for Matthew and I it was second time around. We spent a week in this pleasant little town, back in July 2013, in order to experience Annafest; a beer festival of legendary proportions, but we also took the opportunity of visiting a few other places in the area as well. 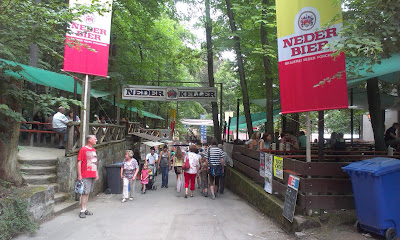 Annafest is held over a 10 day period around the 26th July; the feast of St Anna, the mother of the Virgin Mary. It  takes place at the Kellerwald, a wooded hillside on the edge of Forchheim, where there are a series of natural rock cellars cut into the hillside. The cellars were originally constructed for the storage and maturation of beer, in the days before refrigeration. Today there are two dozen such “Kellers”, the majority of which are just open for Annafest, although a handful remain open all year. 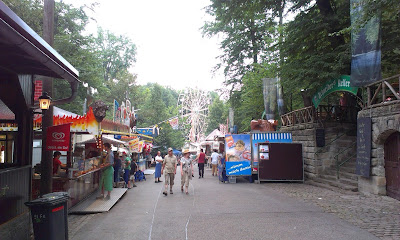 During the summer evenings the Kellerwald is the perfect location for a cool beer in the shady woods. The local Forchheim breweries Hebendanz, Greif, Eichhorn and Neder all brew a strong beer especially for this festival, the so-called Annafestbier, and a number of other local breweries also supply brews of their own as well.

As well as plenty of beer drinking there are other attractions such as fairground rides, various stalls, plus six stages which feature a wide range of different musical acts. With seating for about 30.000 people, the Kellerwald provides sufficient accommodation for the 450,000 – 500,000 visitors who come each year over the course of the festival. 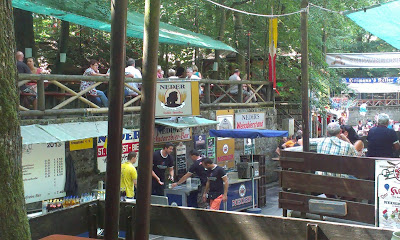 During our stay we found it quite difficult to get a drink plus an evening meal in Forchheim itself. The trouble is most pubs and restaurants close early whilst Annafest is on, with some not bothering to open at all, as it seems everyone in the town it seems wants a piece of the action up on the Kellerwald. The landlord of our rented holiday apartment had warned us about this on our first evening in the town, but we did manage to find a few places open. 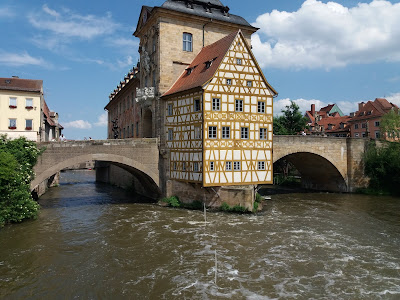 Five years on, we met up with the rest of the group at Bamberg station shortly after 1.30pm. We had all spent the morning doing a spot of sight-seeing, which for Matthew and I involved a look around the cathedral area and the Old Bridge. With the Rathaus, or town hall, hanging precariously over the River Regnitz, on a pier of the bridge, this is by far and away the most photographed building in Bamberg. We took a few of our own, just for completeness, before making our way back to the station. 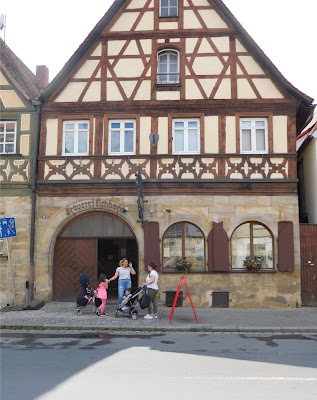 Our tour leader had bought a group ticket for us all, so once we were all assembled we walked under the subway and boarded our train to Forchheim. The station has been enlarged since our last visit, with a couple of new platforms installed. This is because a new high-speed rail line has been built alongside the original tracks. This will enable high-speed trains to complete the journey between Munich and Berlin in under four hours.

Although it is a relatively short walk from the station, into the centre of Forchheim, we waited for a bus as one member of our group is partially disabled, as the result of a particularly nasty motor-bike accident, and finds walking both difficult and painful. Our rail tickets were valid on the bus, which is the beauty of public transport in this part of Germany.

Our bus dropped us close to Brauerei Eichhorn, which was our first port of call. Eichhorn is the smallest of Forchheim’s four breweries, and uses a squirrel as its emblem. This was my visit to their actual pub, as the place had been closed during Annafest.  We sat inside, due to the onset of a thunderstorm, and had the place virtually to ourselves. 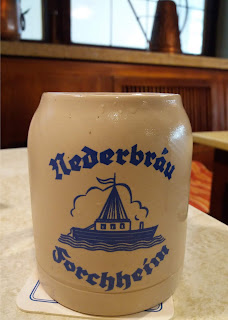 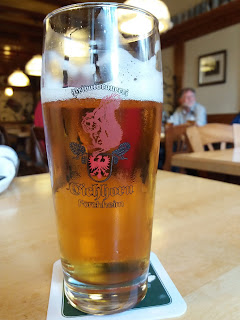 The landlady looked slightly bemused as all 13 of us filed in, but brought us our beer in a friendly and efficient manner. Vollbier Hells was the offering on tap, a pleasant enough dark golden lager, but spoilt by being rather gassy. One member of our party resorted to giving his beer a good stirring with a fork, in order to dispel some of the CO2! 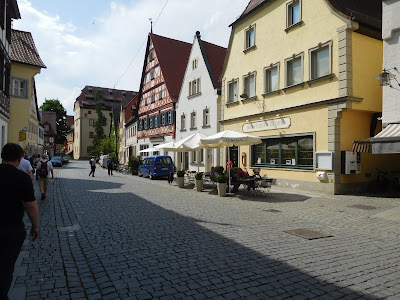 We decided to move on to the Brauerei Neder, the next brew-pub situated a short walk away in the town’s main square. Matthew and I had definitely been there before, recognising it as the place we drank a toast to Prince George, with several rather inebriated locals. (Our arrival in Forchheim five years previously, had coincided with the birth of William and Kate’s first child).

The beer in Neder was much more to everyone’s liking; in fact some people thought it the best beer of the entire trip. Served direct from a cask, perched up on the bar, and dispensed into stoneware Krugs, Neder Kellerbier certainly took some beating, and I could quite happily have stayed for another mug. 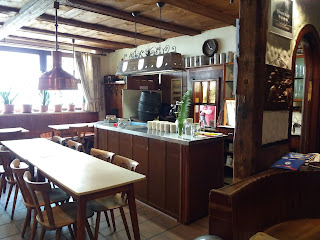 Onward and upwards though, and just a couple of doors away was Brauerei Hebendanz. Like Eichhorn, this brew-pub had also been closed during Annafest. It was an old-fashioned looking place, and for some reason we sat out in the corridor to begin with, before moving into the front bar. We tried the Dunkles, but most of us found it rather disappointing; I couldn’t even find the beer listed on the Hebendanz website.

Because of its location, outside the town centre, we gave Brauerei Greiff, Forchheim’s fourth brew-pub, a miss. I’m pretty certain that  the bus we caught into town earlier would have taken us there, had we not decided to alight at Brauerei Eichhorn, but no matter, as Matthew and I had consumed plenty of Greiff beer at Annafest five year’s previously. 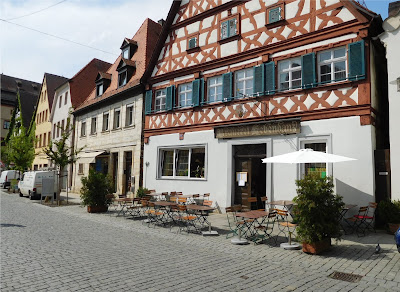 On leaving Brauerei Hebendanz, we caught the bus to the station, and then a train back to Bamberg. It had been something of a whistle-stop tour of Forchheim’s pubs, and with hindsight I would have preferred to have spent a little longer in the town. The fact that this rather fleeting visit brought back memories of Annafest, has persuaded me that a return trip to Forchheim should be planned to coincide with that event, so maybe next year?
Posted by Paul Bailey at 21:00

"As well as plenty of beer drinking there are other attractions such as fairground rides, various stalls, plus six stages which feature a wide range of different musical acts."

"One member of our party resorted to giving his beer a good stirring with a fork, in order to dispel some of the CO2!"

"We tried the Dunkles, but most of us found it rather disappointing; I couldn’t even find the beer listed on the Hebendanz website."

Sigh, certainly a let down after the Neder beer.

"The fact that this rather fleeting visit brought back memories of Annafest, has persuaded me that a return trip to Forchheim should be planned to coincide with that event, so maybe next year?"

Keeping in mind of course that the pubs/restaurants in the town itself may have drastically curtailed hours.

I went to Forchheim as a daytrip too when I stopped in Bamberg a few years ago. I drank in Hebendanz where the beer was pretty tasty I seem to remember. The train trip is very easy as you say, although on the return trip a chemical fire next to the line led to a sweaty hour in front of the station waiting for a replacement coach to turn up. On the other hand, the drive back to Bamberg on it, through some quite beautiful Franconian countryside and villages, was an unexpected bonus to my holiday there.

Russ, in some ways, Annafest is like Oktoberfest, but only superficially, (strong beers brewed especially for the event and served in litre measures, and each Keller serving only its own beer. Fairground rides, side-shows and live entertainment), but there the similarity ends.

Annafest is much less formal than Oktoberfest, the beer is cheaper and also tastier. Unless you want to attend one of the really busy late-evening music sessions, there is no need to pre-book a seat; in fact once served you don’t have to remain seated and can wander around at will. It’s much more relaxed than Oktoberfest and certainly less frantic. It’s also much more of a locals’ festival, meaning there are far fewer tourists or foreign visitors.

I really enjoyed it, especially the fact that you are drinking outdoors, instead of in a crowded tent. If I went again though, I would stay somewhere close to Forchheim, rather than in the town itself, for reasons already discussed.

However, at other times Forchheim is a nice little town in which to base oneself, as Tandleman and Matt have pointed out. With four breweries to choose from as well, what more could a beer lover want?

A less hyped Oktoberfest in a way. I can definitely see the appeal in that. And I never considered staying nearby as it were, to avoid the closures or shortened hours. Chalk that up to living in Canada, where everything is usually farther away. :)