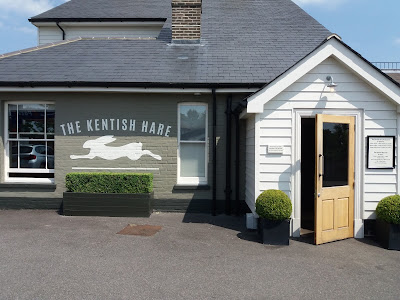 Having set the scene in the previous post, I would now like to reveal the three former Whitbread pubs which re-opened recently, after benefiting from having new owners who have lavished a lot of TLC, as well as hard cash, on their purchases.

The first pub, and the one which required a new roof and a major re-build, is the Kentish Hare; formerly the Hare & Hounds. It is located in the centre of Bidborough, a small village just to the north of Southborough,  which has given its name to the ridge on which it is situated. Bidborough Ridge affords spectacular views northwards across the flatlands which lie between the High Weald and the Greensand Ridge, and on a clear day it is possible to see for miles right across and along this attractive area of  West Kent. 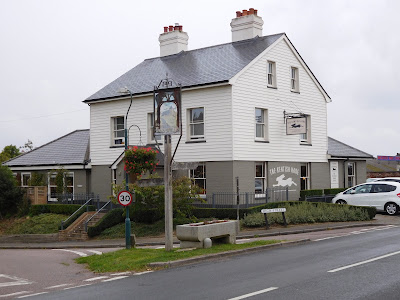 There are quite a few large houses on the edge of the ridge, constructed in order to take advantage of the view. As can be imagined, they cost a pretty penny, but it’s hard to envisage somewhere with that sort of outlook. The main, and much older settlement which is Bidborough, lies further back towards the church, and here are the more normal and affordable houses. The 19th Century building which houses the pub, is situated right on the crossroads, next to the garage and opposite the village shop and Post Office. 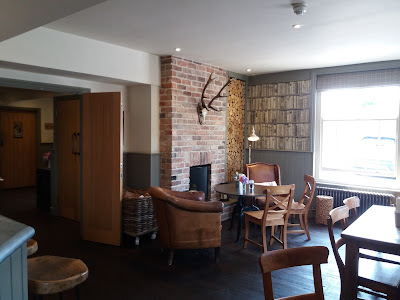 As mentioned in the previous article, the former Hare & Hounds was bought and restored by a titled lady who lives in the village. This benefactor did not want to see Bidborough lose its only pub, which was also the place where the cricket team congregated after matches, and where villagers could meet up to socialise, and catch up with what is going on both locally, and globally.

The pub’s saviour realised that something more than just a village local was necessary to ensure a viable future for her investment, so she engaged the services of  experienced restaurateurs, Chris and James Tanner. The pair opened their first restaurant "Tanners" in Plymouth,  in 1999, which proved to be the start of a thriving family enterprise 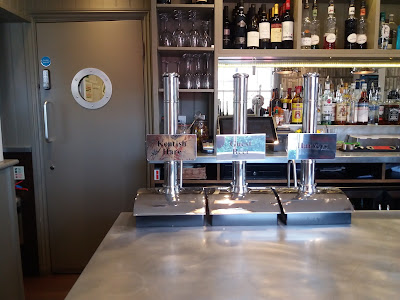 As might be expected, the emphasis at the Kentish Hare is on food, and a step inside reveals that a considerable amount of money has been spent internally, as well as externally. However, with a number of different areas, including a separate restaurant plus conservatory, drinkers need not feel out of place. In fact there is a separate bar area at the front of the pub, where the rather brutalist-looking stainless-steel hand-pulls are the first thing to greet the drinker.

Harvey’s was the only cask beer I recognised, as “Kentish Hare” must be a so-called “house beer”. There is also provision for a “guest ale”. I didn’t find out the identity of the latter, as it was a scorching hot June day (remember them?), when I visited, so unashamedly I ordered a nice cool pint of Estrella Damm, from Barcelona. 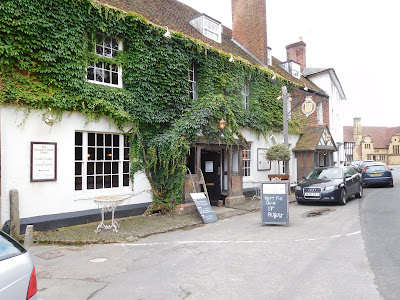 I drive past the Kentish Hare each morning, on my way to work, and I also pass the next pub which is situated in the impossibly pretty, picture-postcard village of Penshurst. The village is home to the Leicester Arms Hotel, which is a fine looking, ivy-covered building, dating back to the 16th Century. It is right in the centre of Penshurst, and is just a short hop from the gates of the historic Tudor Penshurst Place; home to the Sidney family and former home of Anne Boleyn. For those old enough to remember vintage Hollywood, Richard Burton and Elizabeth Taylor, famously stayed at the pub whilst filming a period drama at the nearby Tudor property. 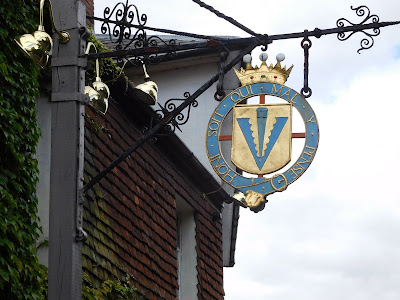 Penshurst Place attracts thousands of visitors each year, so one would imagine the strategically placed Leicester Arms would be an obvious draw for them. I’m sure that this was the case, but it didn’t stop the pub from being closed, and boarded up for quite a lengthy period.

Thankfully the Leicester Arms has now re-opened, but not before a substantial amount of money was spent on the building, putting right years of neglect by its former owners. Today it offers 13 well-equipped en-suite bedrooms, a restaurant and a function room, but happily the front, right hand side of the building still functions as a pub. 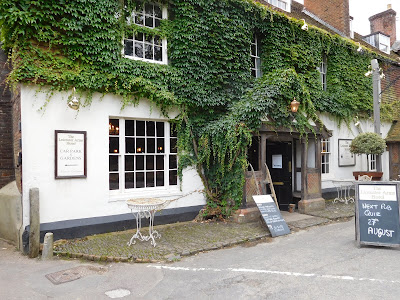 Here there is a bar, which is open all day, offering a warm welcome to locals and visitors alike; something I can personally vouch for. There are two roaring fires for those colder days, and a good array of drinks including local real ales. When I called in, earlier in the year, Larkin’s Traditional, Harvey’s Best, plus a guest ale (an offering from Isfield Brewery at the time), were available  The bar is also dog friendly; as befits a proper country pub.

Although there is a strong emphasis on food, this does not encroach on the pub part of the business, and the bar itself seems to me the same as it ever did. If you do fancy a meal the items on the menu are perhaps a quid or two more than I’d prefer to pay, but considering the surrounding and the location, are not unreasonable. 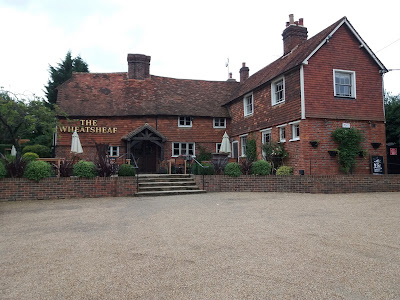 The final pub in our trio of former Whitbread pubs, is in the opposite direction from my workplace, and is situated in the hamlet of Bough Beech. Like the Leicester Arms, the Wheatsheaf was closed for quite some time. Both pubs were at one time run by the same couple; as mentioned in the previous post, but given the amount of work necessary to bring both buildings up to modern standards, it is perhaps not surprising that this husband and wife team decided to call it a day.

Fortunately a local businessman stepped in, and today is busy serving food and drink to the dozens of tourists who visit the nearby attractions of Chiddingstone and Hever castles. The benefactor in this instance is the same person who has recently taken over the tenancy of the historic Castle Inn, in the nearby National -Trust owned village of Chiddingstone. He is also reported to be a director of Westerham Brewery, which might explain the number of Westerham beers on the bar. 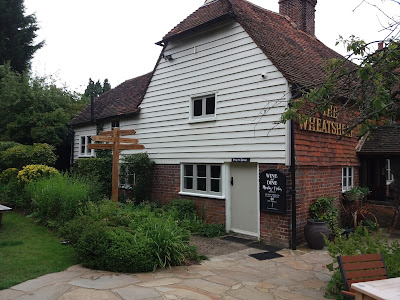 I have visited the Wheatsheaf on a couple of occasions since it re-opened; the last one being a couple of weeks ago. I had a half day off work, so I called in just before 12.30pm. The pub was quite quiet, but it was a Monday and the weather was not exactly what you would call summer-like. Even so I was brave enough to sit out in the rather splendid garden after I had bought my pint of Westerham Viceroy. Other beers on tap included Harvey’s Best, Larkin’s Traditional plus two other Westerham beers; slightly too many in my view! 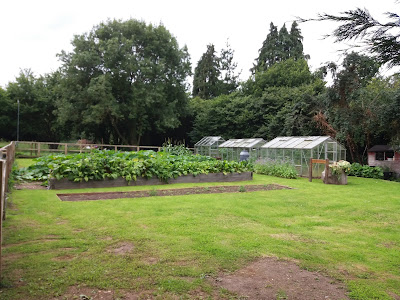 The pub interior is divided into a number of smaller areas, each with their own individual charm, and has been renovated in a tasteful manner, sympathetic to the character of this old inn. The building is rumoured to date from the end of the 14th Century, and in Tudor times it served as a hunting lodge for nearby Hever Castle. Various clues to its age and previous owners have been uncovered during renovations, and some of these can be viewed in the pub.

Today the Wheatsheaf majors on food, much of it locally sourced. The pub even has its own “kitchen garden”, which the chef and the staff are rather proud of. Given it close proximity to the local historic attractions, it is understandably popular with tourists. The large car-park at the front of the building is testament to this popularity. 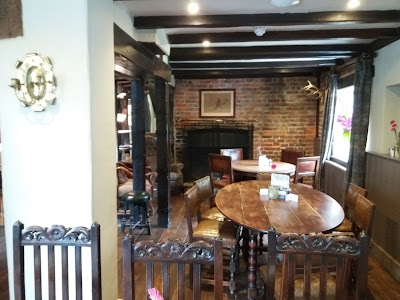 Like the other two pubs, there is an area where people can sit and enjoy a drink without feeling pressurised to order a meal. The staff were pleasant and friendly as well, which is always a good sign, so all in all the Wheatsheaf is definitely worthy of a visit.

Like I said at the end  of the previous post, these three pubs have become “destination” eating places, and one is also a thriving hotel. Whilst traditionalists might bemoan the fact they are no longer the simple country alehouses they once were, the fact they are still open and are continuing to welcome both casual and local drinkers, is definitely worthy of applause.

"Whilst traditionalists might bemoan the fact they are no longer the simple country alehouses they once were, the fact they are still open and are continuing to welcome both casual and local drinkers, is definitely worthy of applause."

I agree. Someone took the time, money, and effort to get them back up and running. Having a side area that reflects the former "pub" style is nothing to sneer at.

I wonder if Richard and Elizabeth rented all of the rooms at the Leicester Arms (since there would only be a dozen or so) in order to have some privacy?

I agree with Russ. At least they're open, and there's only so many pure boozers (like Cowden Pound) or micropubs that can be supported in an area like west Kent.

I am certain that were it not for the deep pockets and sense of community values of the benefactors concerned, the two pubs in this post (Kentish Hare and Wheatsheaf), would have been turned into private houses. This unfortunately has been the fate of many rural pubs over the last few decades, and included in the casualty list are pubs whose closure would have seemed inconceivable a generation ago.

With its background and reputation as a hotel, in a picturesque village, popular with tourists, the Leicester Arms was always going to be different, but it still needed someone with a lot of money to make good the effects of years of neglect.

There is no way that the two pubs could survive as wet-led outlets, which is why the food trade now plays such a vital part in keeping them viable. This point was recognised by the chairman of the Bidborough community council on the opening night of the Kentish Hare.

Speaking to the local press, Graham Parson said: “It’s so good to have the pub back as it is very important for the village. If you lose it, you can lose the heart of the community. The village will support the pub but it needs to be a destination venue for people from outside the village too.”