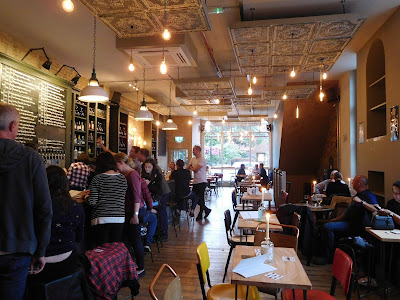 Well it’s been a long time coming, but boy it was well worth the wait, because on Friday evening Fuggles, the well-known Tunbridge Wells beer café, finally opens its outlet in Tonbridge; the town I have lived in for the past 30 plus years.

I was actually treated to a sneak preview on Wednesday evening as, along with a number of local beer enthusiasts, I was invited along to a so-called “soft opening”; a sort of trial run, if you like, to check everything is working as it should and that the staff know what they’re doing. 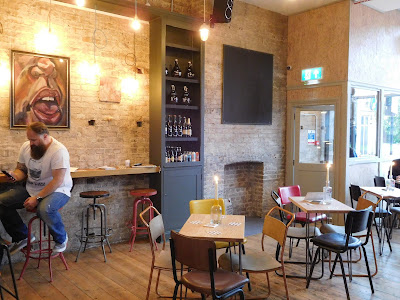 The weather on Wednesday was England at its "summer best" – that is to say, it was pouring down with rain. I have never quite fathomed out why people who don’t have to, take their holiday in August, as the month is often unsettled and some years can prove a total wash-out. Small matter, armed with an umbrella, a brisk 25 minute walk from my house saw me arriving at Fuggles newly converted premises at the north end of Tonbridge High Street.

Fuggles founder, and owner, Alex Greig, had been looking for suitable premises in Tonbridge for a long time. A couple of years ago he tested the water by booking a “pop-up” slot at the town’s Old Fire Station; a local “event location” which can be hired out for various functions, on a short term basis (typically Thursday through to Sunday). This trial run by Fuggles was an immediate hit with the good people of Tonbridge and proved, beyond all doubt, that the town was crying out for such an outlet. I wrote about this event, here. 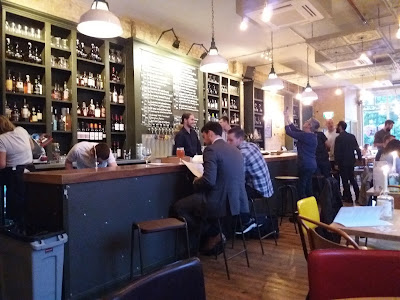 Having established the demand, the search was on for suitable premises, but these proved much harder to come by. Eventually Alex settled on an attractive, late Victorian building, which was home to Bonner’s Flooring. This was a family-run business, and when the shop became available following the retirement of the owner, Alex managed to secure the lease. A lengthy planning process then ensued, followed by an even lengthier period of renovation and alterations, to turn the building into today’s attractive and well-appointed beer café.

I arrived looking slightly bedraggled, but Alex was waiting to greet me at the door, as he was for all the guests last night, for this invitation only event. We had a brief chat and he told me how relieved he was that Fuggles Tonbridge was finally open. The project had over-run by a couple of months, due to a number of unforeseen circumstances and in fact there were still ongoing electricity works, taking place on the pavement outside, when I arrived. 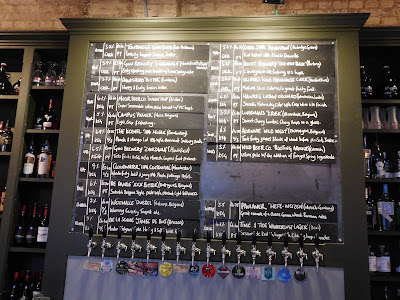 I made my way to the bar and perused the extensive selection of beers available. Following the same format as the original Tunbridge Wells Fuggles,  the beers  available are chalked up on a large blackboard behind the bar. This is also where the keg taps are located; something which is very much in the style of American craft beer bars.  I started off with a couple of cask beers first; Gun Scaramanga 3.9%, followed by Hawkshead Bitter 3.7%. Both were good. There were another three cask ales on tap, plus around a dozen keg beers.

I met up with three friends from my local CAMRA branch, and also with a former branch chairman who I hadn’t seen in years, plus his partner,. We based ourselves at one of the tables at the far end of the room, from where we could see the comings and goings. Tonbridge Fuggles follows the same layout as its older counterpart, with an L-shaped bar and serving area along the right hand wall. Unlike Tunbridge Wells there are windows along part of the opposite wall, which although of frosted glass, allow a decent amount of natural light in (apart from when the skies are black with clouds and it’s pouring down outside!). The toilets are downstairs, along with the extensive cellar area. 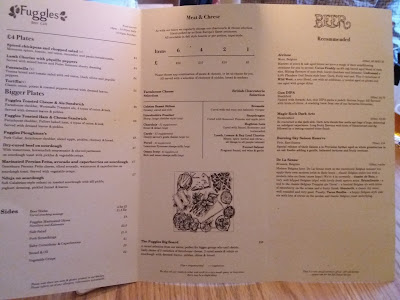 Although the bar was fairly quiet to begin with, it didn’t take long for it to fill up. I moved onto the keg beers next, starting with the exceptional The Kernel Mosaic IPA 6.9%, followed by the 9.1% Cloudwater Double IPA. Now much has been written about Cloudwater, and this was my first experience of their beer. Even so, I much preferred the offering from The Kernel, most probably because 9.1% is a little too strong for my liking and a beer of that strength is not especially thirst-quenching.

I thought it  best to have something to eat so went for one of Fuggles legendary toasted cheese and ale sandwiches. Complete with a handful of rocket and a dish of miniature gherkins, this was just the right accompaniment for the beer. One friend was particularly hungry, so he opted for the rather splendid looking Ploughman’s.

It was time to switch to the dark-side, so to start with I went for a Belgian offering which I have drunk many times in bottles form, but never on draught. Westmalle Dubbel 7.5%, is a fine example of a Trappist Dubbel. I followed it with a 9.5% Imperial Stout from Weird Beard. 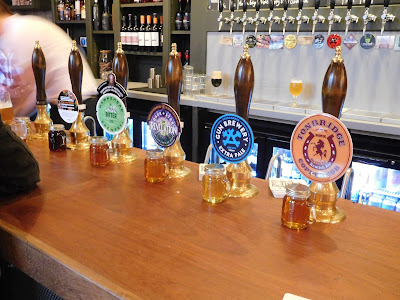 I should add here that the four stronger keg beers listed above, were consumed in quantities of one third of a pint. The two weaker cask beers, were enjoyed by the half. The reason for this, work the following morning, with our regular monthly management review meeting starting at 11am.

We left at around 8.45pm, in order to make room for the second group of people invited for the “soft opening". It had been a truly excellent evening and I can’t even begin to tell you how pleased I am to have the Fuggles experience, right here in the heart of Tonbridge. I can certainly see me making regular trips along the High Street to see what’s on offer.

So congratulation to Alex and his team for their hard work and dedication in getting the place open,  and best wishes for their future success. Fuggles Tonbridge opens for real tomorrow evening, Friday 11th August at 5pm. I suspect it will be very busy!

Disclaimer and apology: my three friends and I each received a voucher from Alex in respect of drink or food, up to a certain value. I redeemed mine for beer and paid for my food.

Sorry, but there are no external shots of Fuggles. Yesterday evening’s rain was of biblical proportions and there was no way I was going to stand outside, getting myself and the camera soaking wet, whilst trying to take a photo!

Glad to see this has arrived, a cert for GBG 2019 !
We should meet up there with for Mrs RM for a pint of DIPA.
Really disappointed you didn't suffer for your art and take a photo of the deluge for us, Paul.

Yes Martin, Fuggles opening was well worth the wait. A meet up there with you and Mrs RM would be good, and I might even be tempted to sink a pint of DIPA!

As to the external photo, I will take a few over the weekend; but not if it’s raining!

Good write up about the new Fuggles. Really enjoyed our evening and the beer was wonderful, as always. Dave and I, went on Friday, early evening so we missed you, and it was extremely busy but organised and efficient (no empties left on tables, etc). Hopefully, business will continue to be good as it certainly is a splendid establishment.

The ability to clear empties off the table is a boon for a pub (of course, a good pubgoer always takes their own glass back !)

Agreed 100% Martin, that a good pub-goer always takes their glasses back. Spoons are notoriously bad at not clearing the tables where people don't do this; also a wipe over with a damp cloth, wouldn't go amiss either!